Newfoundland and Labrador’s Gary Oke, who survived the Pre-Qualifying round at the 2014 Canadian Mixed Curling Championship at the Rideau CC in Ottawa, won his first main round-robin match Monday morning ,6-5 over the Northwest Territories’ Steve Moss. 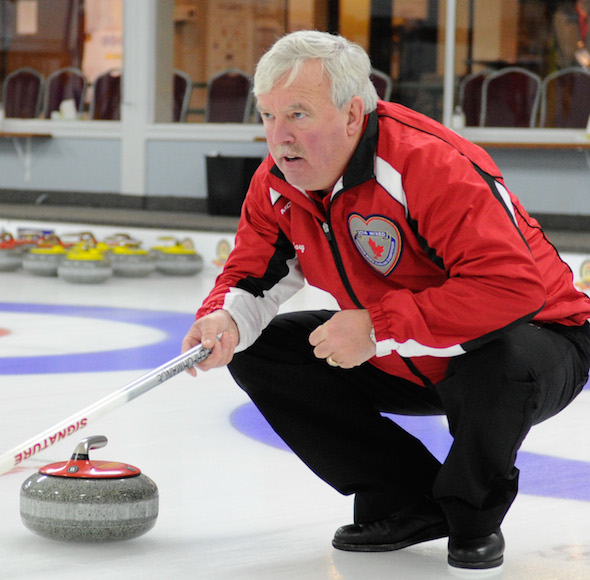 The Corner Brook skip, with vice Susan Curtis, second Terry Oke and lead Sigrid Fitzpatrick, stormed out to a 5-2 lead after six ends. The Yellowknife foursome fought back with singles in the seventh and eighth ends and could have scored more in the ninth except for a nice raise double takeout by Oke to keep the damage to a steal of one and a 5-5 tie coming home. In the 10th end, Moss had a stone in the back four-foot while Oke had second shot in the twelve-foot area.  With his last stone, Moss tried to place his stone in the top of the eight-foot on the centre line but came just short of the rings and, even worse, not covering the shot stone.  Oke clipped it out of play for the victory and a win/loss record of 1-2.  The NWT is at 0-3. 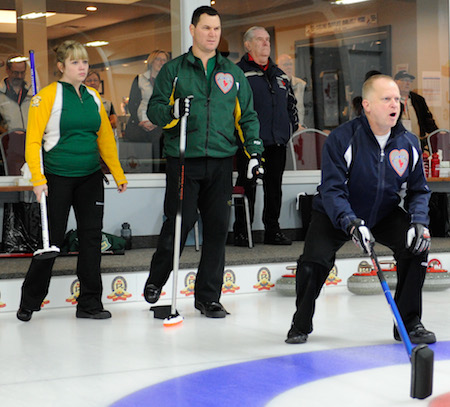 In the only other game of this morning’s Draw 5, Northern Ontario’s Charlie Robert squared off against Nova Scotia’s Rob Harris in a battle of 1-1 teams, and it was Northern Ontario cruising to a 9-2 win.  Harris stole a single in the fourth end for the 2-1 lead; Robert’s team blanked the next two ends, then broke it open by slamming a five-ender on the board to lead 6-2.  A steal of three in the eighth end finished the contest. Northern Ontario improved to 2-1 while Nova Scotia drops to 1-2. Quebec’s Mike Fournier continues to lead the pack at 3-0 and will the defending champions from Ontario in Draw 6 later today. Five other teams are tied for second place at 2-1: Alberta (Moulding); Saskatchewan (Meachem), Ontario (Heggestad), New Brunswick (Robichaud) and Northern Ontario (Robert). Round-robin games continue until Friday morning. The semifinal will be played that day at 7:30 p.m. with the Championship Final at 2 p.m. on Saturday, Nov. 23. Live scoring can be viewed  www.curling.ca/scoreboard The Official Mixed Web Site  www.curling.ca/2014mixed-en Host committee’s web page  www.canadianmixed.com/ Facebook  www.facebook.com/canadianmixed