The leaders heading into Draw 8 at the 2014 Canadian Mixed Curling Championship at the Rideau CC in Ottawa made short work of their opponents, improving their records to 5-1 and maintaining their joint holds on first place. 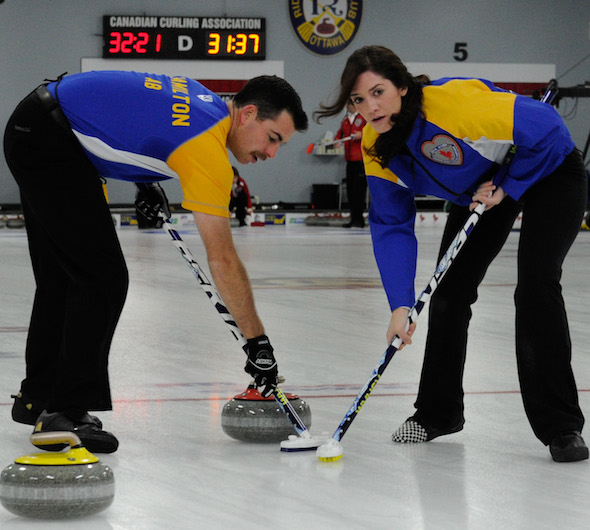 Alberta’s Darren Moulding is on an impressive five-game win streak, including a 7-3 win Tuesday morning over the Northwest Territories. With teammates Heather Jensen, Brent Hamilton and Anna-Marie Moulding, Alberta scored two points in the third end to take a 3-1 lead over the Territories’ Steve Moss 3-1. Moss countered with a single in the fourth end, only to watch Moulding score consecutive singles in ends five to seven.  The teams traded singles in the eighth and ninth ends, after which the Territories — winless in five starts — conceded the game. Quebec’s Mike Fournier, meanwhile, upped his record to 5-1 with a 7-2 defeat of Northern Ontario’s Charlie Robert. With the score tied at two playing the fifth, Quebec stole three points to jump ahead 5-2. The next two ends were blanked, then in the eighth and ninth ends, Fournier stole singles in both ends to end the game.  Northern Ontario dropped to 3-2 with the loss Nova Scotia’s Rob Harris kept his slim playoffs hopes alive with a 6-4 win over B.C.’s Keith Switzer. The key ends were the fifth, when Harris stole a single, and the seventh when he countered a B.C. deuce with a pair of his own.  Nova Scotia improved to 2-3 while B.C. dropped to 2-4. 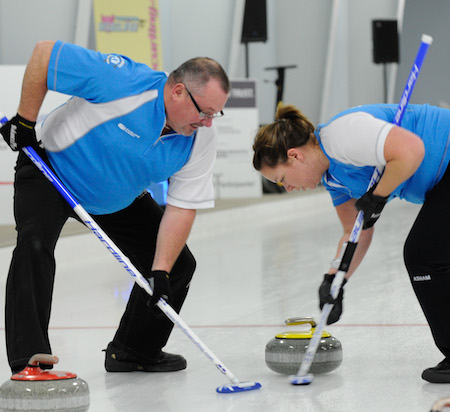 In an all-Atlantic tilt, P.E.I.’s Rod MAcDonald topped Newfoundland and Labrador’s Gary Oke 5-4. The teams were tied coming home with P.E.I. holding the hammer. The P.E.I. foursome was precise in its shotmaking, leaving little for Oke in his attempt to steal the winning point. When Oke’s last stone failed to get shot stone, the game was over. P.E.I. is now at 2-4 while Newfoundland/Labrador drops to 1-4. Teams with the morning byes: Ontario (3-1), New Brunswick (3-1), Manitoba (1-3) & Saskatchewan  (3-1). Round-robin games continue until Friday morning. The semifinal will be played that day at 7:30 p.m. with the Championship Final at 2 p.m. on Saturday, Nov. 23. Live scoring can be viewed  www.curling.ca/scoreboard The Official Mixed Web Site  www.curling.ca/2014mixed-en Host committee’s web page  www.canadianmixed.com/ Facebook  www.facebook.com/canadianmixed