Darren Moulding’s Alberta squad stretched its winning streak to stay atop the leaderboard at the 2014 Canadian Mixed Curling Championship at the Rideau CC in Ottawa. 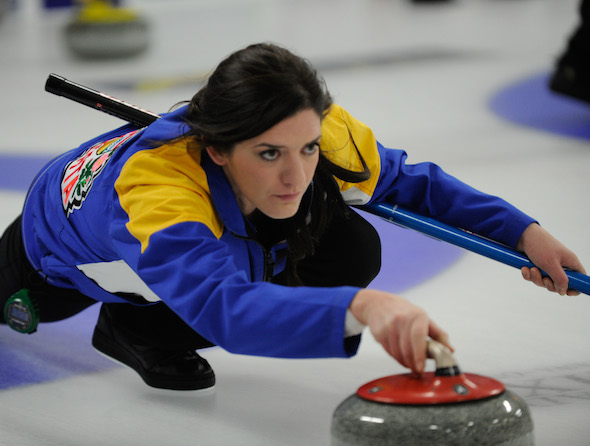 The Albertans, from the Airdrie and Coaldale clubs, stole two in the first and single points in the second and eighth ends en route to a 7-4 win over defending champ Cory Heggestad of Ontario. Heggestad was heavy with his last-shot draw in the first end, and caught debris with his last delivery of the second and Alberta never looked back. Alberta improved to 6-1 while Ontario dropped to join Nova Scotia and Northern Ontario at 3-3. In an another showdown of contenders, it was stolen points that again told the tale. Taking on New Brunswick’s Sylvie Robichaud, Quebec skip Mike Fournier was heavy with his draw in the first end and surrendered a steal of six, putting his team behind the 8-ball. New Brunswick would add another steal in the second and sailed home with a 9-4 win. It was New Brunswick’s fifth win in six outings, while Quebec was knocked out of the one-loss club to a record of 5-2. 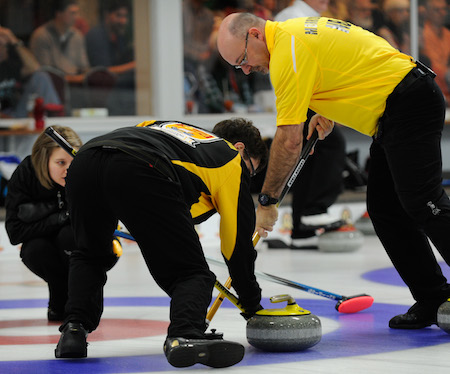 P.E.I.’s Rod MacDonald, meanwhile, kept his playoff hopes alive with a crucial 10-5 win over Manitoba’s Sean Grassie. Both teams were looking for their third win and keep it close for the first half of the game. But MacDonald broke the game open in the sixth when Grassie’s final stone, a tapback to bail the team out of trouble, did not curl enough, leaving MacDonald a draw for four. P.E.I.’s record improved to 3-4 while Manitoba dropped to 2-4. In the other Tuesday night game, Saskatchewan’s Shaun Meachem kept within hailing distance of Alberta thanks to a 10-5 win over B.C.’s Keith Switzer. B.C. led 5-4 through six ends, but Switzer had nothing but a freeze attempt facing five to escape from seventh end. Instead, Switzer’s shot wrecked, leaving Meachem the open hit for the handshake-inducing six. Saskatchewan improved to 5-1, while B.C. dipped to 2-5. Teams with the evening byes: Nova Scotia (3-3), Northern Ontario (3-3), Newfoundland and Labrador (1-5) and Northwest Territories (0-6). Round-robin games continue until Friday morning. The semifinal will be played that day at 7:30 p.m. with the Championship Final at 2 p.m. on Saturday, Nov. 23. Live scoring can be viewed  www.curling.ca/scoreboard The Official Mixed Web Site  www.curling.ca/2014mixed-en Host committee’s web page  www.canadianmixed.com/ Facebook  www.facebook.com/canadianmixed