Saskatchewan and New Brunswick stayed close to the leaders of the pack — Quebec and Alberta  — at the 2014 Canadian Mixed Curling Championship at the Rideau CC in Ottawa, but defending champion Ontario was not as fortunate. 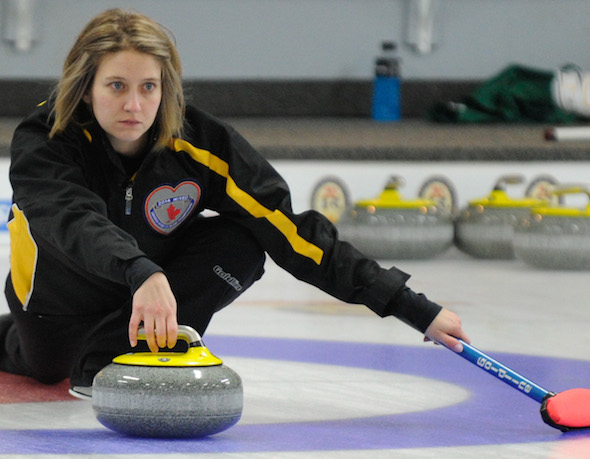 With the leaders enjoying the afternoon byes, Saskatchewan’s Shaun Meachem upped his win/loss record to 4-1 following a lopsided win 8-2 win over Newfoundland and Labrador’s Gary Oke.  Meachem, with Swift Current CC teammates Kelly Wood, Carl deConinck Smith and Kelsey Dutton, stole three points in the second end followed by another three points in the eighth end, after which Oke, 1-5, conceded. Sylvie Robichaud’s rink from Moncton, meanwhile, with vice Marcel Robichaud, second Marie Richard and lead Lloyd Morrison, stole two points in the fourth end and a single point in the fifth end en route to a 7-4 win over the Northwest Territories’ Steve Moss. New Brunswick’s record is 4-1 while the Territories remain winless in six tries. Cory Heggestad’s Orillia CC team squared off against Nova Scotia’s Rob Harris in the most entertaining game of this afternoon’s draw, with the Bluenosers pulling out a 7-6 extra-end triumph. 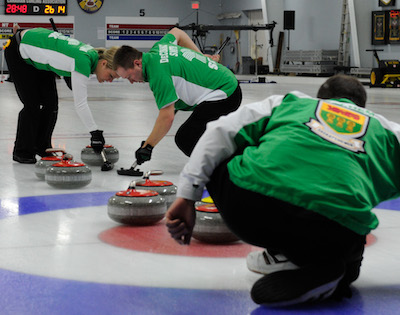 With the score 3-2 in favour of Ontario, Harris posted a nice deuce in the eighth end for his first lead of the day. Heggestad poured it on in the ninth, scoring three for a two-point lead coming home.  Harris managed to tie the game with a pair in the 10th, forcing the extra. Harris made a tricky draw, finishing up near the button surrounded by yellow Ontario stones. Heggestad tried an angle raise take-out with his first but ended up leaving one Nova Scotia shot stone behind cover and moving all his stones to the twelve foot area. Harris guarded, and with the final stone of the game, Heggestad was light with his draw to the four-foot to give the steal and the win to Nova Scotia. Ontario is 3-2 and Nova Scotia improved to 2-3. Sean Grassie’s Deer Lodge crew from Manitoba, meanwhile, closed in on the .500 mark by dumping Northern Ontario’s Charlie Robert 9-4. After posting three points in the fourth end, Grassie ran up four more points via the steal over the next three ends. Manitoba improved to 2-3 while Northern Ontario had a rough day, dropping both games to sit level at 3-3. Teams with the afternoon byes: Prince Edward Island (2-4), British Columbia (2-4), Quebec (5-1) and Alberta (5-1). Round-robin games continue until Friday morning. The semifinal will be played that day at 7:30 p.m. with the Championship Final at 2 p.m. on Saturday, Nov. 23. Live scoring can be viewed  www.curling.ca/scoreboard The Official Mixed Web Site  www.curling.ca/2014mixed-en Host committee’s web page  www.canadianmixed.com/ Facebook  www.facebook.com/canadianmixed