Cory Heggestad, the defending Canadian Mixed champion, kept his playoff hopes alive with a solid 11-7 win over Sault Ste. Marie’s Charlie Robert in the traditional rivalry between Ontario and Northern Ontario in Draw 13 at the 2014 Canadian Mixed Curling Championship Wednesday night at the Rideau CC in Ottawa. 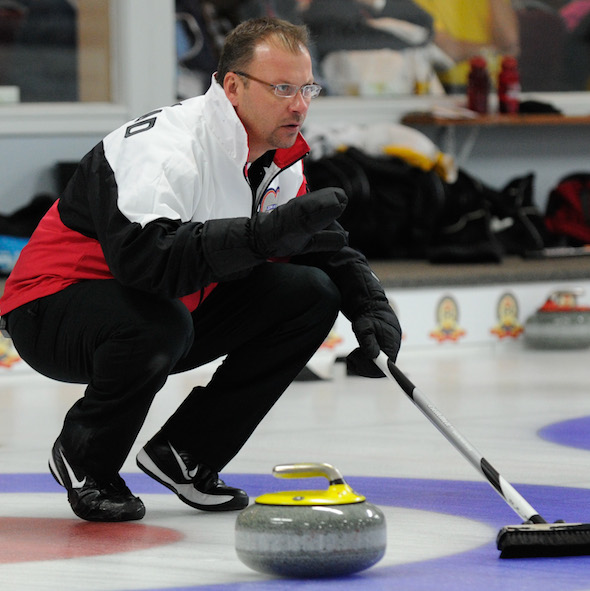 The Orillia skip, with vice Heather Graham, second Greg Balsdon and lead Amy Balsdon, scored a four-ender in the third to jump ahead 6-2. Robert managed a steal in the fifth to pull within two points, only to fall four behind in the sixth. After Heggestad surrendered a single in the seventh, he looked to put the game away with a raise takeout for two in the eightth end but it backfired badly when he missed the called shot and chipped a second stone in the rings for a steal of two for Robert. But Robert’s hopes for a playoff spot were dashed in the ninth when Heggestad scored three more to end the game. Ontario is 5-3 and alone in fifth place. Northern Ontario hangs on at 3-5, mathematically still in the hunt for the final playoff spot. Making a bid for a playoff spot, Saskatchewan’s Shaun Meachem hung on for an 8-6 win over a stubborn Northwest Territories team skipped by Steve Moss, who had won his first game earlier in the day. Moss and his Yellowknife teammates stormed out to a 3-0 lead after two ends, but Meachem scored three points in the third end to tie it, then moved ahead for good in the sixth with a steal of one, followed by steals of one in both the seventh and eighth ends. Moss posted a deuce in the ninth to get within one, and Meachem was forced to draw the full four-foot in the last end to avoid playing an 11th end, and made it with great sweeping help from his front end. Saskatchewan’s record is now 6-2, good enough for a tie for third place with New Brunswick. The Territories’ record is now 1-7. 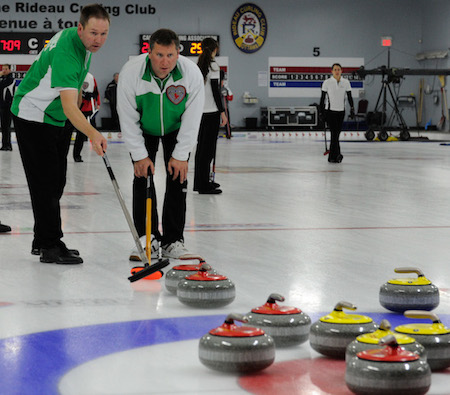 New Brunswick fell into that tie for third place after an 8-4 loss to Nova Scotia’s Rob Harris. The Halifax-based skip needed a win to keep his playoff hopes alive and did so in fine fashion. A score of three in the third, a steal of one in the fourth end and finally three more points in the sixth end put the game out of reach for Robichaud; only her second loss of the tournament. Nova Scotia is 4-4. In the final game of the evening, Manitoba’s Sean Grassie made short work of Newfoundland and Labrador’s Gary Oke 8-3 in a game conceded after eight ends. Grassie, too, is mathematically still alive for that last playoff spot at 3-5. Oke is now 1-7. Teams with the evening byes were: first place Alberta (8-1); second place Quebec (7-2); P.E.I. (4-5) and British Columbia (2-7). The team finishing first overall advances to the championship final while the second-place team will meet the third-place team in the semifinal. Round-robin games continue until Friday morning. The semifinal will be played that day at 7:30 p.m. with the Championship Final at 2 p.m. on Saturday. Live scoring can be viewed  www.curling.ca/scoreboard The Official Mixed Web Site  www.curling.ca/2014mixed-en Host committee’s web page  www.canadianmixed.com/ Facebook  www.facebook.com/canadianmixed