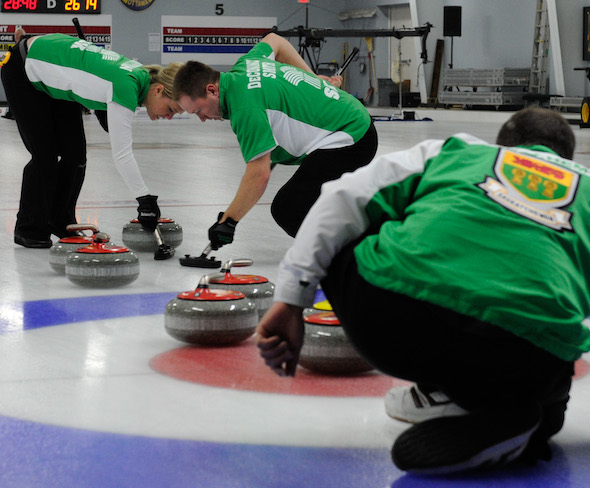 In a tightly played contest, Meachem broke open a 1-1 game with a deuce in the fifth end. After the break, New Brunswick was forced to a single in the sixth end but then forced Saskatchewan to a single in the seventh. The eighth end was blanked leading to an interesting ninth end. Robichaud manoeuvred her stones very well, forcing Meachem to a lengthy discussion on both his stones. He tried a raise double takeout with his final stone, but one of New Brunswick’s stones jammed, leaving Robichaud a shot at the game-tying deuce. But Robichaud rolled out on her hit attempt. Up one with hammer in the 10th, Meachem drew to backing looking at two New Brunswick counters for the victory to improve to 7-2. New Brunswick’s record dropped to 6-3, tied for fourth place with Ontario’s Cory Heggestad. The Ontario skip, winner of last year’s Canadian Mixed, squared up against another former Canadian Mixed champion, Sean Grassie of Manitoba, the 2009 winner. It was the reigning champ prevailing 10-2, thanks to stolen deuces in both the second and third ends, and a game-ending four count in the seventh. The loss officially eliminated Grassie (3-6) from the playoff picture; as well, teams with five losses or more also were eliminated. Mayflower CC’s Rob Harris of Halifax is still in the hunt for a playoff/tiebreaker spot with an 8-2 win over Newfoundland and Labrador’s Gary Oke. Harris’s Nova Scotia quartet is 5-4 and must win its last two games for any chance at post round-robin play. His opponents are Quebec and Manitoba. Newfoundland and Labrador, meanwhile, is 1-8 and in 12th place. 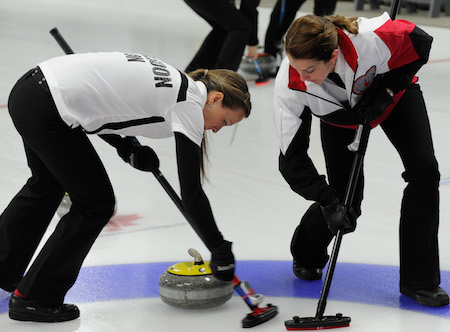 In the final game of this morning draw, the Northwest Territories’ Steve Moss continued his strong play of the past couple of days, defeating Northern Ontario’s Charlie Robert 7-5. Moss scored two points in each of the first, third and fifth ends en route to the win, which improved his record to 2-7, while Northern Ontario dropped to 3-6. Key match-ups in Draw 15 at 2:30 p.m. ET feature: Alberta (8-1) vs. New Brunswick (6-3) and Quebec versus Saskatchewan in a battle of 7-2 teams. Teams with the morning byes were: Alberta; Quebec; P.E.I.; and British Columbia. The team finishing first overall advances to the championship final while the second-place team will meet the third-place team in the semifinal. Round-robin games continue until Friday morning. The semifinal will be played that day at 7:30 p.m. with the Championship Final at 2 p.m. on Saturday. Live scoring can be viewed  www.curling.ca/scoreboard The Official Mixed Web Site  www.curling.ca/2014mixed-en Host committee’s web page  www.canadianmixed.com/ Facebook  www.facebook.com/canadianmixed