Ontario’s Cory Heggestad is alive and well in pursuit of a second consecutive national title at the 2014 Canadian Mixed Championship at the Rideau CC in Ottawa. 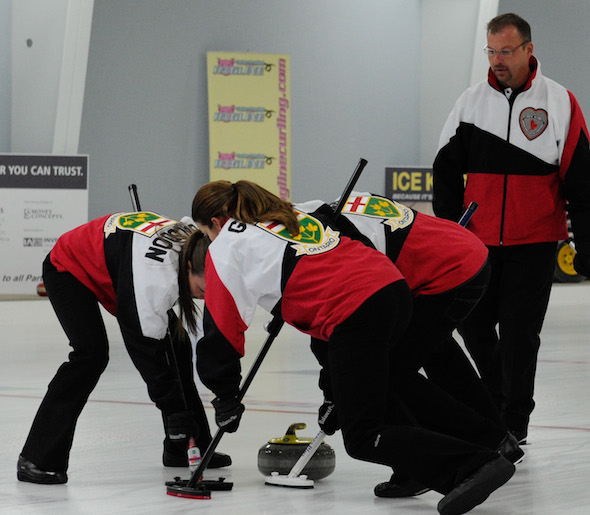 Ontario skip Cory Heggestad, right, looks on as his team drags a rock into the rings during their tiebreaker win over New Brunswick. (Photo, CCA/Claudette Bockstael, Studio C Photography)

In a barn-burner of game with terrific shotmaking by both teams, Heggestad, backed up by Heather Graham, Greg Balsdon and Amy Balsdon of the Orillia CC, calmly drew the eight-foot in defeating a stubborn Sylvie Robichaud of New Brunswick 9-8 in the tiebreaker game to decide third place. With the win, Ontario advances to Friday night’s semifinal against Saskatchewan’s Shaun Meachem, with the winner moving on to play Alberta’s Darren Moulding in Saturday’s 2 p.m. championship game. With the score 4-3 for New Brunswick playing the sixth end, Ontario’s last shot appeared — to the majority of the crowd anyway — to be a draw to the eight-foot for two points. Instead, Heggestad played a split on his own stone outside of the rings, made more difficult with New Brunswick having two stones in the 12-foot area. The Ontario skipper’s gutsy call resulted in a wonderfully executed three points and a 6-4 lead. The teams traded deuces in the next three ends, leaving the teams tied coming home at 8-8. Coming home, New Brunswick had a decent steal attempt set up; however, Graham made a well-timed double takeout to open things up. With her final delivery, Robichaud drew between two stones, but deep to the back eight-foot to set up the routine draw for the Ontario win. Live scoring can be viewed  www.curling.ca/scoreboard The Official Mixed Web Site  www.curling.ca/2014mixed-en Host committee’s web page  www.canadianmixed.com/ Facebook  www.facebook.com/canadianmixed