In the same club in which he suffered one of his greatest curling heartbreaks more than 10 years ago, Darren Moulding got some long-awaited redemption on Saturday afternoon. 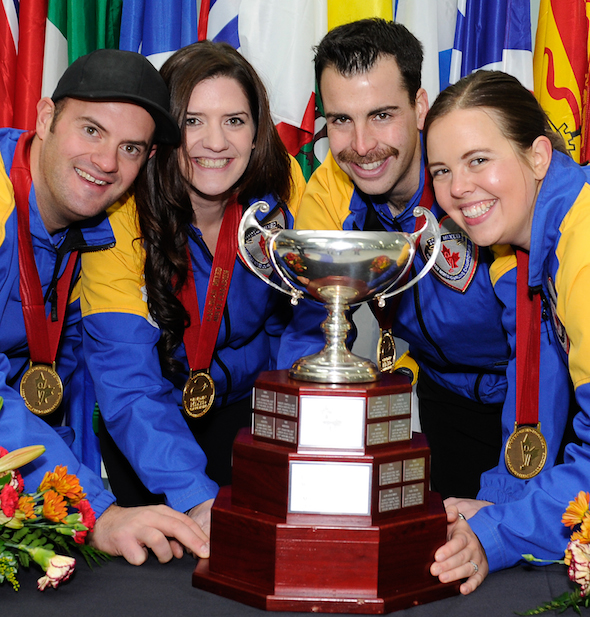 The 30-year-old skip and his Alberta team from the Coaldale and Airdrie Curling Clubs captured the 2014 Canadian Mixed Curling Championship with an 8-5 win over defending champion Cory Heggestad of Ontario in the championship game at the Rideau Curling Club in Ottawa. It was at this club in 2003 where Moulding fell short to Saskatchewan’s Steve Laycock in the final of the Canadian Junior Men’s championship. So Saturday was especially sweet, as Alberta captured its 10th title at the Canadian Mixed, and first since Calgary’s Dean Ross prevailed in 2008. “I thought about it,” admitted a chuckling Moulding, whose team was rounded by sister Heather Jensen, Brent Hamilton and his wife Anna-Marie Moulding. “It’s even the same sheet of ice. It’s something that’s bothered me for 10 years. Just two years ago, somebody was talking to me about it and asked me about the double I missed in seven (against Laycock) and I damn near started to cry. So, yeah, it puts a bit of a lid on that for me. It was something that always chafed me a little bit.” Alberta, 9-2 and first place after the round robin, had a slow start, giving up a steal of one to an Ontario team that won three times on Friday to reach the final. But Moulding came back strong the next two ends, tapping for a deuce in the second and stealing one in the third when Heggestad attempted a double-takeout. 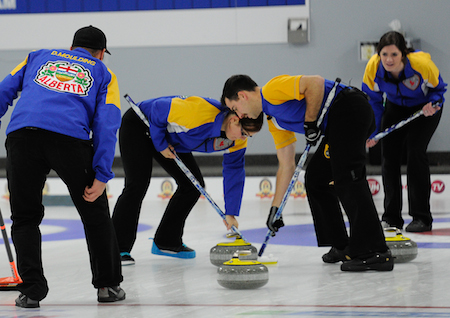 But Heggestad tied it with single points in the next two ends, and forced Moulding to a single in the sixth before taking his first lead of the game with a great double-takeout in the seventh to score two. That’s when Moulding turned up the heat. A runback double takeout from Hamilton would set up Moulding’s tap for a deuce to retake the lead. And in the ninth, two Ontario picks left Heggestad with only a tough in-off to score; he would miss it, and Moulding would steal two to put the game and the national championship away. “It was a crazy game,” said Moulding. “We had our chances; we almost broke it open in five when I had a shot for five or six. After missing that it felt like somebody kicking me in the gut. But then you go, ‘OK, we’re tied with the hammer.’ Someone tells us we’re tied with hammer with five ends to go to win a Canadian championship, you take it, right? “It’s amazing to share it with this team. It’s just one of those things where you want to win more for the people on your team than yourself, right? I think that’s when people perform their best.” With the win, the Moulding team gets two entries (two two-person teams) into the 2014 Canadian Mixed Doubles Trials, slated for March 19-23, also in Ottawa. The winner of this 32-team competition will then represent Canada at the World Mixed Doubles, April 22-29 in Dumfries, Scotland. The 2015 Canadian Mixed Championship is scheduled for Nov. 8-15, 2014, with the pre-qualifier to take place Nov. 6 and 7 at the Granite Club, in North Bay, Ont.