Tim Hortons Roar of the Rings pushes teams to limit

Please indulge me while I tell you something that you already know. If you are joining us on this website, then you probably are well aware of the strength of Canadian curling but humour me for a second.

Jeff Stoughton is just one of an abundance of talented skips who will be competing at the Tim Hortons Roar of the Rings. (Photo, CCA/Michael Burns)

The eight men’s teams competing in the Tim Hortons Roar of the Rings have their names on the following hardware: The men’s field at the Roar of the Rings is so good that the defending Tim Hortons Brier champions had to qualify through the Capital One Road to the Roar Pre-Trials. The embarrassment of riches that is Canadian curling is staggering. Just qualifying for the Roar of the Rings is a chore unto itself. Teams qualified for Winnipeg through winning the Canada Cup or by leading the CTRS over a one-year or two-year span. The two spots that went to teams Mike McEwen and John Epping based on two-year CTRS totals were 435.985 and 296.070 respectively. The CTRS is based on each team’s best eight results each season. To give those numbers context, those two scores were an average of 27.2 and 18.5 points per event for two years. That means on average each team has to make a quarter-final or semifinal, in full-point strength-of-field events, for eight events per year, in order to just qualify for the Trials. To me, that shows how consistently good these teams are that will be competing in Winnipeg. Curling in Canada is a “keeping up with the Joneses” proposition for every team these days. I know as an up-and-coming team, to see what teams like Martin and Ferbey were doing in our own backyard in Alberta, as well as teams like Stoughton and Howard in other parts of Canada, we knew where the bar was that we needed to get to. It was a situation of either put in the hard work or get your brains beat in (and sometimes it was put in hard work and get your brains beat in anyway!). It is a choice that a few teams have made in this country and the results speak for themselves. All of this leads to the Roar of the Rings in Winnipeg in December, where all of these great teams will congregate to determine who goes to Sochi. That is why the Roar of the Rings is such a difficult proposition for the best of teams — there are zero “free spaces on the bingo card.” Teams will not be able to sleepwalk through any games, and if they do their dreams of representing Canada in February could be over in an instant. 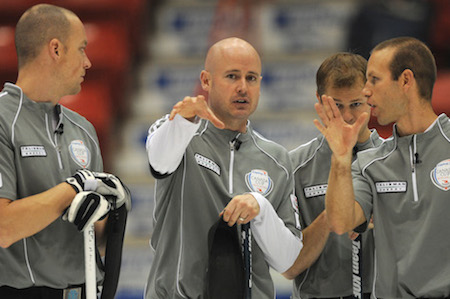 Nolan Thiessen, left, and his teammates Kevin Koe, Carter Rycroft and Pat Simmons know they have a tall order in front of them at the Tim Horton Roar of the Rings. (Photo, CCA/Michael Burns)

I asked a few of the international teams who have already qualified for the Olympics what their thoughts were on our Trials. The defending world champs from Sweden summed it up like this: “Winning a game at your Trials is like winning a quarter-final or semifinal at a Grand Slam. Just making the playoffs at the Roar of the Rings is like winning five or six Grand Slam playoff games in a row!” As I talked about earlier in this blog series, I was at an Olympic Excellence Series event in May in Vancouver, where many of the potential Canadian Olympians for Sochi assembled for a weekend of presentations. In talking with many of the competitors from other sports, I would often hear the question, “Well, how many Canadian curling teams get to go?” and they were shocked when I said “one men’s and women’s team.” Their sports are used to having at minimum two representatives, so to think of a sport like curling where we have such a strong nucleus of teams, that we can only send one team seems crazy and unfair to them. Even if Canada were able to send two teams to the Olympics, the Roar of the Rings would still be the hardest event to win all year for whoever makes it through the minefield. Only being able to send one team just makes the stakes higher and will increase the level of competition even more. Everyone knows what is on the line — one team gets all of the riches and the rest of the field gets to go home and watch them on TV in February, like the rest of Canada. All or nothing with the best of the world in one arena … I can’t wait.