A trip to Sochi, Russia, and the right to wear the Maple Leaf in curling’s most important event will be on the line when the 2013 Tim Hortons Roar of the Rings Canadian Curling Trials, presented by Monsanto, get underway on Sunday at the MTS Centre in Winnipeg. 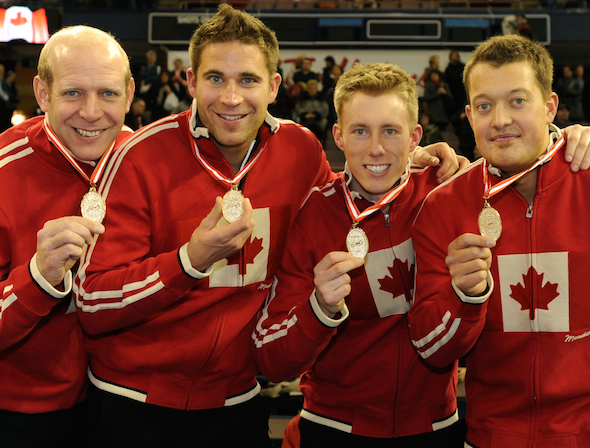 All four members of the 2009 Tim Hortons Roar of the Rings champs, from left, Kevin Martin, John Morris, Marc Kennedy and Ben Hebert, will be in Winnipeg for the 2013 Roar. (Photo, CCA/Michael Burns)

In addition to the curling that will be on display in Sunday’s opening draw at 1 p.m. (all times Central), there will be a special visitor on hand as the legendary Anchorman, Ron Burgundy himself, will be appearing at the MTS Centre with an on-ice appearance before the first draw, and some work in the booth with the TSN commentating crew. But for the rest of the week, the focus will be on curling as eight men’s and eight women’s teams battle it out to chase Olympic gold in Sochi. The Trials competition format is a round robin, with the first-place teams advancing to their respective finals, while the second- and third-place teams meet in a semifinal to determine the other finalist. TSN/TSN2 and RDS2 will televise all draws, leading to the women’s final on Saturday evening, Dec. 7 at 6:30 p.m., and the men’s final Sunday afternoon, Dec. 8 at 2 p.m. 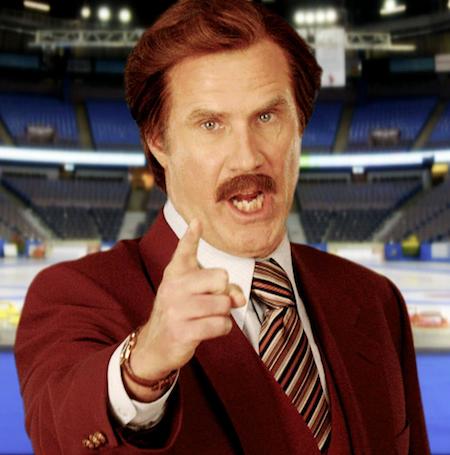 Ron Burgundy will be in the house for the opening draw on Sunday.

After the opening women’s draw, men’s play gets underway Sunday at 6:30 p.m., and round-robin play continues Monday through Thursday with draws at 8:30 a.m., 1:30 p.m. and 6:30 p.m. each day, with the exception of Thursday when there is no morning draw. The final round-robin draw is Friday at 8:30 a.m., with potential tiebreakers Friday at 1:30 p.m. and the women’s semifinal Friday at 6:30 p.m. The eight-team women’s field is led by four-time Scotties Tournament of Hearts champion and former world champion Jennifer Jones, who’ll be playing in front of her hometown friends and family in Winnipeg. She’ll be challenged by reigning Scotties champion Rachel Homan of Ottawa; Homan defeated Jones in the 2013 Scotties final last February in Kingston, Ont. Also in the field are 2012 Scotties champion and world championship bronze-medallist Heather Nedohin of Edmonton, along with another hometown hopeful Chelsea Carey of Winnipeg. Rounding out the field are Stefanie Lawton of Saskatoon, Sherry Middaugh of Coldwater, Ont., Renée Sonnenberg of Grande Prairie, Alta., and Val Sweeting of Edmonton — the latter two having qualified for the Trials via the Capital One Road to the Roar Pre-Trials, presented by Monsanto, which concluded earlier this month in Kitchener, Ont. Only two players in the women’s field — alternates Amy Nixon (bronze medal in 2006 playing third for Shannon Kleibrink) for Team Nedohin and Cori Morris (silver medal in 2010 playing lead for Cheryl Bernard) for Team Lawton have previous Olympic experience. The men’s field, meanwhile, has plenty of past Olympic experience, with medallists from all four previous Canadian Olympic men’s teams in the field. Leading the way is reigning gold-medallist Kevin Martin of Edmonton, who also won silver in 2002 at Salt Lake City. Martin still has lead Ben Hebert and second Marc Kennedy with him from the 2010 squad, while his 2010 vice-skip, John Morris, will skip his own team (based in Vernon/Kelowna, B.C.) in the 2013 Tim Hortons Roar of the Rings. As well, Carter Rycroft, who threw second rocks for Martin in 2002, will handle the same position in Winnipeg for Calgary’s Kevin Koe. From the 1998 Games in Nagano, Japan, where curling made its debut as a medal sport for both genders, is Collin Mitchell, the second for Team John Epping from Toronto; he played the same position for Mike Harris’s silver-medal winning team in ’98. As well, two members of the 2006 Canadian gold-medal men’s team will be at the 2013 Tim Hortons Roar of the Rings: Mark Nichols, who now plays lead for Winnipeg’s Jeff Stoughton, and Brad Gushue, who threw fourth stones in 2006 and will be the alternate for Martin’s team. In addition to the past Olympians, the field includes some of the biggest names in the sport’s history, including three-time Brier and two-time world champion Stoughton of Winnipeg, and four-time Brier and world champion Glenn Howard of Penetanguishene, Ont., not to mention reigning Tim Hortons Brier champion Brad Jacobs of Sault Ste. Marie, Ont., who along with Morris qualified for the Trials out of the Capital One Road to the Roar Pre-Trials, presented by Monsanto, in Kitchener. Another hometown favourite, Mike McEwen of Winnipeg, rounds out the field — one of the toughest ever assembled. Draw results will be instantly available at www.curling.ca. For ticket information, go to www.curling.ca/tickets. For rosters of the Tim Hortons Roar of the Rings teams, click here for the men and click here for the women. For the complete Trials draw, click here. Prior to Sunday’s opening draw will be two significant events. On Saturday — practice day for the 16 teams — Fanfest will offer up curling’s version of a tailgate party. There will be prizes (including a trip to the 2014 WFG Continental Cup in Las Vegas), face-painting for the kids as well as the popular Street Curling game, where participants can throw rocks on synthetic ice. On Sunday, the Opening Ceremonies will kick off the 2013 Tim Hortons Roar of the Rings. The ceremonies will get underway at 11 a.m. at the MTS Centre. Admission is free with a Draw 1 ticket. These Trials will be the sixth such competition to determine Canada’s representatives at the Winter Olympics. In 1987, the Labatt National Curling Trials were held in Calgary and won by Vancouver’s Linda Moore and Calgary’s Ed Lukowich. Moore would go on to win a gold medal while Lukowich received a bronze medal at the 1988 Olympic Winter Games in Calgary, when curling was a demonstration sport.

Jennifer Jones will have plenty of hometown fans for the 2013 Tim Hortons Roar of the Rings. (Photo, CCA/Andrew Klaver)

For the 1992 Olympics in Albertville, France, rather than conduct a Trials competition, the CCA decided in advance that the winners of the 1991 Labatt Brier and Scotties Tournament of Hearts, ultimately Martin and Victoria’s Julie Sutton, would represent Canada. Martin finished fourth while Sutton won a bronze medal, when curling was still a demonstration sport. In 1997, the Trials were held in Brandon, Man., and won by Harris and Regina’s Sandra Schmirler. Schmirler went on to capture the first official gold medal for women at the 1998 Olympic Winter Games in Nagano (Karuizawa), Japan while Harris earned a silver medal. In 2001, the Trials were staged in Regina and won by Martin and New Westminster, B.C.’s Kelley Law. Martin then earned a silver medal at the 2002 Olympic Winter Games in Salt Lake City (Ogden), Utah, while Law won a bronze medal. At the 2005 Tim Hortons Canadian Curling Trials in Halifax, the Gushue team of St. John’s, which was being skipped by Russ Howard, and Kleibrink emerged victorious. Gushue’s team won a gold medal at the 2006 Olympic Winter Games in Turin (Pinerolo), Italy, while Kleibrink earned a bronze medal. Four years ago at the Tim Hortons Roar of the Rings in Edmonton, Martin earned his third trip to the Olympics, while Bernard won the women’s title. They would earn gold and silver respectively at the 2010 Winter Olympics in Vancouver.