Jennifer Jones wasted no time in securing her first victory at the Tim Hortons Roar of the Rings, presented by Monsanto. Jones scored six points, tying the record for most points in a single end at a Canadian Curling Trials event, en route to a 10-2 victory over fellow Winnipegger Chelsea Carey in eight ends after her Sunday victory at the MTS Centre. 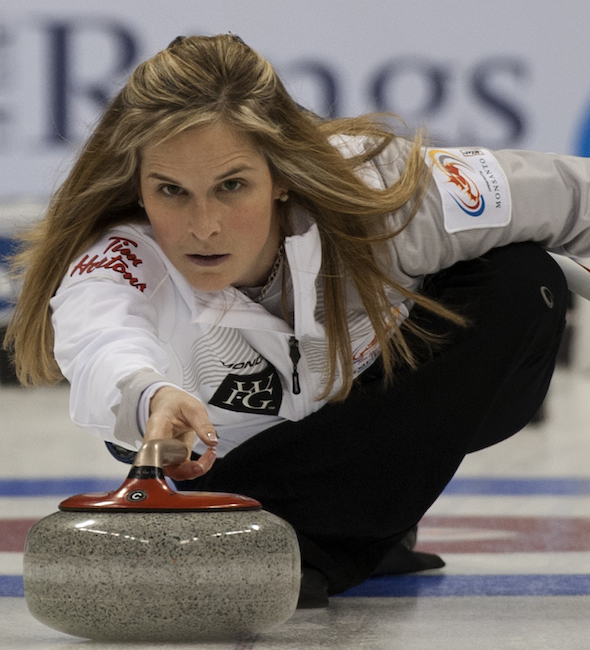 Jennifer Jones got off to a winning start on Sunday at the Tim Hortons Roar of the Rings. (Photo, CCA/Michael Burns)

“If we could score six in every game, I would be pretty excited, but you know, it was obviously the turning point in that game,” Jones said. Jones, supported by Kaitlyn Lawes, Jill Officer, Dawn McEwen, alternate Kirsten Wall and coach Janet Arnott, opened the scoring with one point in the second end, forcing Carey to throw away her final shot. Jones followed up by stealing another two points in the third end and controlled the game at 3-0. In the fourth end, Carey and her teammates Breanne Meakin (filling in for third Kristy McDonald, who has a stomach flu), Kristen Foster, Lindsay Titheridge, and coach Dan Carey, had a hit and roll for two points, but couldn’t bump back Jones’ second shot to get the deuce. Carey settled for one point in the fourth end and trailed 3-1 heading into the fifth end. 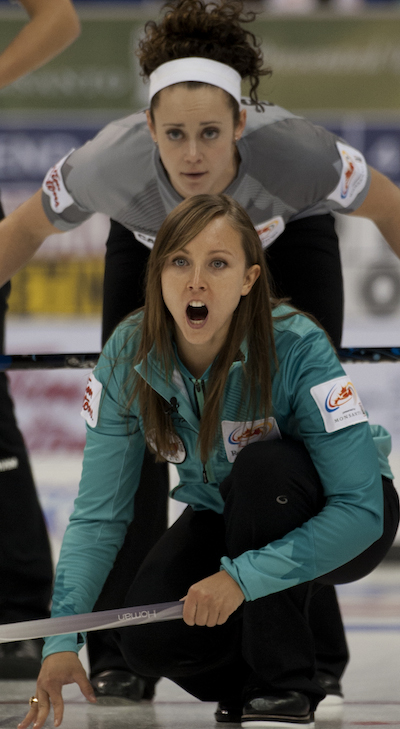 “We were just on the wrong side of the inch. My last rock picked in three and then we were just off on everything after that,” Carey said. “We were throwing it really good and the weight was really close and we’d just rub a guard and we’d just miss the runback.” After blanking the fifth end, Jones and her team scattered five rocks around the centre line, three in the front of the house and two in the back. Carey attempted an in-off from her own stone on the edge of the 12-foot but left a runback for Jones. At the conclusion of the sixth end, Jones was counting six points and tied Connie Laliberte’s record from 1997 for the most points in a single end by a female team at a Trials event. “It feels great to start with a win. It’s a long week, but a short week,” Jones said. “It’s a pretty short round robin from what we’re used to, so you don’t want to get behind the 8-ball early.” In other Draw 1 action, Val Sweeting’s Edmonton team defeated Ottawa’s Rachel Homan 10-3 in nine ends. Sweeting set the pace early and stole points in four of the nine ends, including back-to-back steals of two in the eighth and ninth ends. Sherry Middaugh of Coldwater, Ont., was coming home with the hammer and a 4-3 lead against Saskatoon’s Stefanie Lawton. In the final frame Lawton attempted to come around a centre guard but drew light and Middaugh didn’t have to throw her last rock to come out with the 5-3 victory. Heather Nedohin of Edmonton had to fight back into her game against fellow Albertan Renée Sonnenberg of Grande Prairie. Sonnenberg led the game 5-2 at the fifth end break but Nedohin fought back and trailed 7-6 without the hammer in the final end. Nedohin attempted to remove Sonnenberg’s shot stone behind cover but couldn’t push it back far enough. Sonnenberg didn’t have to throw her final stone and walked out with the 8-6 victory. The men will take to the ice at Winnipeg’s Centre tonight at 6:30 p.m. (CST). Edmonton’s Kevin Martin will play Winnipeg’s Mike McEwen, Kevin Koe of Edmonton faces Toronto’s John Epping, Glenn Howard of Penetanguishene, Ont. is up against British Columbia’s John Morris, and Brad Jacobs of Sault Ste. Marie, Ont., will take on local team Jeff Stoughton. All draws for the Tim Hortons Roar of the Rings will be televised live on TSN/RDS 2, the official broadcasting partner of the Season of Champions. Live scoring, statistics and updated draw brackets are available at: https://www.curling.ca/scoreboard To purchase tickets to the Tim Hortons Roar of the Rings, presented by Monsanto go to: https://www.curling.ca/2013roaroftherings-en/tickets/ The French version of this story will be available at https://www.curling.ca/2013roaroftherings-fr/ as soon as possible.