Homan rights the ship with Roar of the Rings victory

Rachel Homan couldn’t picture going 0-2 this early into the Tim Hortons Roar of the Rings, presented by Monsanto. “We really needed a win this morning and I guess you could say there’s a lot more pressure this morning than there was yesterday,” Homan said. 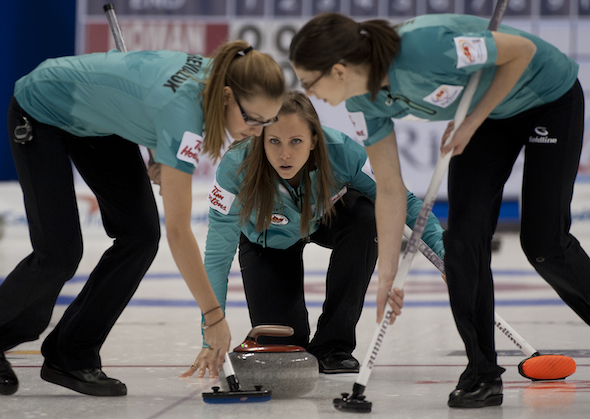 Ottawa’s Homan picked up her first win on Monday morning at Winnipeg’s MTS Centre with an 8-2 victory over Renée Sonnenberg of Grande Prairie, Alta. in eight ends. The victory brings Homan to an even 1-1 and drops Sonnenberg to the same record. Homan blanked the first two ends, trying to set up a score of more than one point. However, Sonnenberg and her team consisting of Lawnie MacDonald, Carry-Anne McTaggart, Rona Pasika, alternate Desirée Owen and coach Kurt Balderston forced Homan to one point in the third end. Even with the missed the opportunity for a deuce, Homan and her foursome of Emma Miskew, Alison Kreviazuk, Lisa Weagle, alternate Heather Smith and coach Earle Morris took control of the game in the fourth end with a steal of three points. After Sonnenberg missed her first take out attempt, Homan elected to hit Sonnenberg’s second shot rock and lay three, rather than put a second guard on her shot stone. The strategy paid off, as Sonnenberg sent her final shot through the house to give up the score of three and lead 4-0. 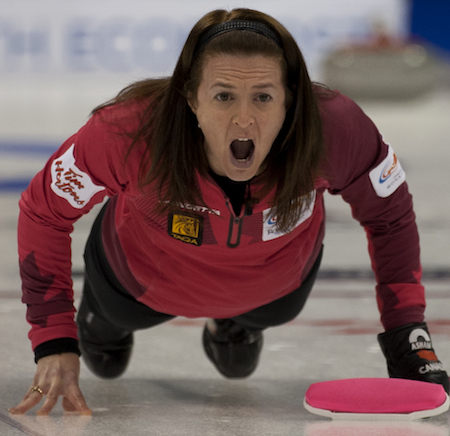 Edmonton’s Heather Nedohin urges on her sweepers during Monday morning action at the Tim Hortons Roar of the Rings. (Photo, CCA/Michael Burns)

“She didn’t really have a draw if we guarded but there was a chance for her to get and angle slash for a couple,” Homan said. “It was kind of a Hail Mary, but it was there.” Sonnenberg, scored a single in the sixth end and stole another point in the seventh, but Homan capped off the victory with a score of four in the eighth end. “We were playing well and felt really good about our game and we still do,” Sonnenberg said after the loss. “We’re not like, hanging our head and thinking we’re out of it. If you’re going to lose a bad game, early in the week is the time to do it.” In other Draw 3 action, Capital One Road to the Roar qualifier Val Sweeting of Edmonton gained momentum with an 8-6 victory over Saskatoon’s Stefanie Lawton. Sweeting, 2-0, scored deuces in three ends with the hammer to drop Lawton to 0-2. On the sheet next to them, Winnipeg’s Chelsea Carey scored two points on a double in the 10th end to tie Heather Nedohin of Edmonton at 5-5. In the extra frame Nedohin came up light on her final draw and gave up an 8-5 loss. Carey improves to 1-1, while Nedohin drops to 0-2. In the last game of Draw 3, Winnipeg’s Jennifer Jones stole two points in an extra end to defeat Coldwater, Ont.’s Sherry Middaugh. Middaugh was facing two Jones rocks and she sailed her hit just wide and through the house. The 9-7 victory leaves Jones undefeated and drops Middaugh to 1-1. The men will play their second game of the round robin in Draw 4 of the Tim Hortons Roar of the Rings and the teams with 1-0 records are looking to increase their lead in the standings because they all face teams with 0-1 records. John Epping of Toronto (1-0) will play Glenn Howard (0-1) of Penetanguishene, Ont. Winnipeg’s Mike McEwen (0-1) will try and pick up his first victory against Sault Ste. Marie, Ont.’s Brad Jacobs (1-0). Winnipeg’s Jeff Stoughton (0-1) squares off against Edmonton’s Kevin Martin (1-0) and Vernon/Kelowna B.C.’s John Morris (1-0) will try to stay undefeated when he plays Edmonton’s Kevin Koe (0-1). All draws for the Tim Hortons Roar of the Rings will be televised live on TSN/RDS 2, the official broadcasting partner of the Season of Champions. Live scoring, statistics and updated draw brackets are available at: www.curling.ca/scoreboard/ To purchase tickets to the Tim Hortons Roar of the Rings, presented by Monsanto go to: www.curling.ca/2013roaroftherings-en/tickets/ The French version of this story will be available at www.curling.ca/2013roaroftherings-fr/ as soon as possible.