Martin wins Roar of the Rings showdown against local favourite

Edmonton’s Kevin Martin continued to roll at the Tim Hortons Roar of the Rings, presented by Monsanto, during Monday afternoon’s draw at the MTS Centre in Winnipeg. 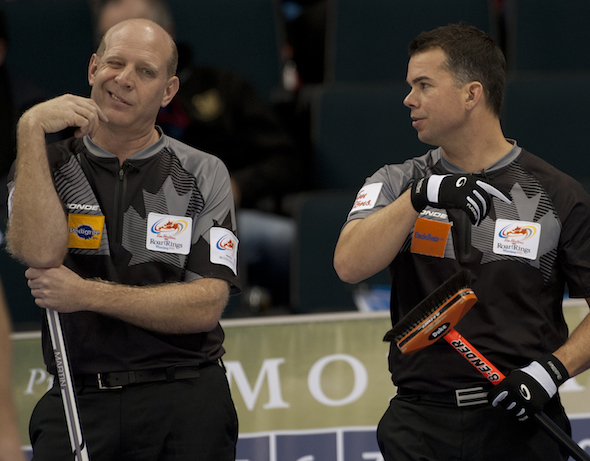 Martin delivered a delicate out-turn draw to backing in the four-foot to earn a 6-5 victory over hometown favourite Jeff Stoughton during Draw 4. Martin and his team of Dave Nedohin, Marc Kennedy, Ben Hebert, alternate Brad Gushue and coach Jules Owchar, jumped to an early lead, scoring a deuce in the third end and exchanging singles with Stoughton in the fourth and fifth ends to take a 3-1 lead halfway through the game. After a Stoughton single in the sixth end and a blanked seventh, Martin used the hammer efficiently in the eighth. Thirds Jon Mead and Nedohin hit back-to-back doubles followed by a close attempt at a cross-house double by Stoughton. With Martin sitting one, he split the house with his first shot and just had to remove Stoughton’s final rock to score the deuce and increase his lead to 5-2 after eight ends. But Stoughton and teammates Mead, Reid Carruthers, Mark Nichols, alternate Garth Smith and coach Rob Meakin weren’t going down without making the game interesting. With his final shot in the ninth end, Stoughton hit a crowd-pleasing  double takeout for three points and tied the game at 5-5. Martin kept the house empty in the 10th end and made the draw to the lid with backing to pick up the win. Martin’s victory keeps him at the top of the standings with a 2-0 record. Stoughton’s record is at the opposite end, and sits at 0-2 after two days of play. “You take the wins when you can and you just keep going,” Martin said. “You can’t worry about the last game; you just keep going because every team is so good and you just hope to get to 5-2.” 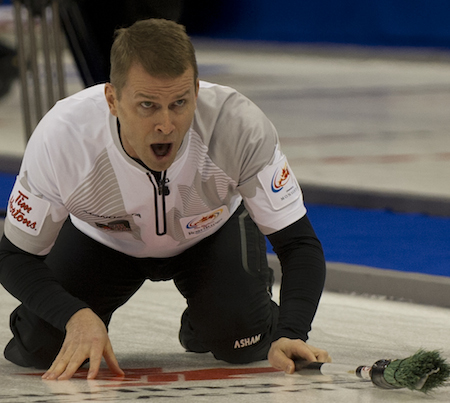 “It’s not where we wanted to be after two games, but you know, we’re taking the positives,” Stoughton said. “We thought we played really well, we just couldn’t get any half shot misses out of them.” Two other teams kept pace with Martin to remain at 2-0. Brad Jacobs of Sault Ste. Marie, Ont., defeated Winnipeg’s Mike McEwen 7-5, thanks in part to scoring a deuce in the sixth end and tacking on a steal of two in the seventh. McEwen is still searching for his first win at 0-2. John Morris of Vernon/Kelowna, B.C. picked up another win, this time a 6-4 victory over Calgary’s Kevin Koe. The loss keeps Koe in the basement of the standings at 0-2. In the final game of Draw 4, Glenn Howard of Penetanguishene, Ont. took three on Toronto’s John Epping in the first end and didn’t relent. Howard led 7-2 at the fifth end break and focused on the defensive side of the game in the second half en route to a 9-5 victory in nine ends. The Howard win gives both teams a 1-1 record. Draw 5 will feature the third round-robin game for the women’s teams at the Tim Hortons Roar of the Rings. The last two undefeated teams, Jennifer Jones (2-0) of Winnipeg and Val Sweeting (2-0) of Edmonton will face each other in the battle of the unbeaten. Saskatoon’s Stefanie Lawton (0-2) will search for her first victory against Grande Prairie, Alta.’s Renée Sonnenberg. Edmonton’s Heather Nedohin (0-2) is also seeking her first victory against Coldwater, Ont.’s Sherry Middaugh (1-1). In the final game of Draw 5, Winnipeg’s Chelsea Carey (1-1) will try to secure a victory over defending Scotties champion from Ottawa, Rachel Homan (1-1). All draws for the Tim Hortons Roar of the Rings will be televised live on TSN/RDS 2, the official broadcasting partner of the Season of Champions. Live scoring, statistics and updated draw brackets are available at: www.curling.ca/scoreboard/ To purchase tickets to the Tim Hortons Roar of the Rings, presented by Monsanto go to: www.curling.ca/2013roaroftherings-en/tickets/ The French version of this story will be available at www.curling.ca/2013roaroftherings-fr/ as soon as possible.