Sweeting takes down Jones in battle of Roar unbeatens

Val Sweeting and her rink came to the MTS Centre as underdogs, but left Monday evening’s draw at the Tim Hortons Roar of the Rings, presented by Monsanto, with seven teams in their rear-view mirror. 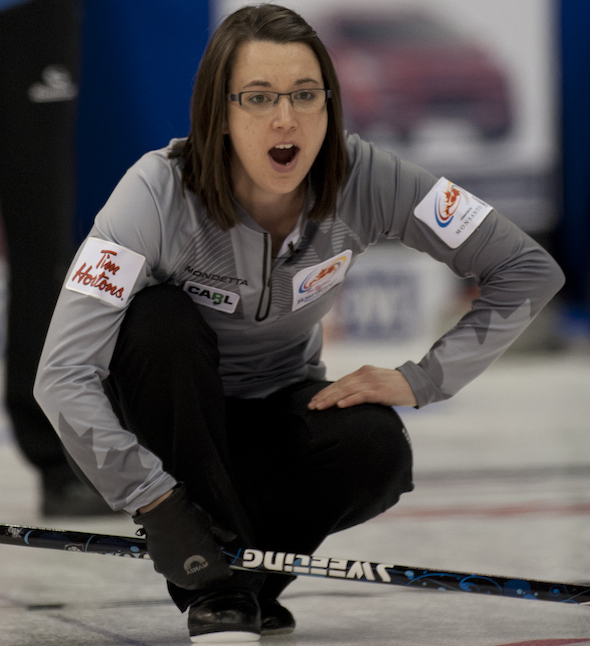 Sweeting and her Edmonton foursome of Dana Ferguson, Joanne Courtney, Rachelle Pidherny, alternate Amber Holland and coach Taina Smiley stole seven of their nine points in a 9-6 victory over Winnipeg’s Jennifer Jones. Sweeting now leads the women’s field with a 3-0 record and is the only undefeated women’s team at the Tim Hortons Roar of the Rings. Jones and her rink were undefeated, but now drop to 2-1. The turning point in this game came in the seventh end. With the game tied at 4-4, Sweeting made a double tap to sit four without the hammer and Jones sent her stone through the house, avoiding contact with any of Sweeting’s four counters. The Edmonton rink took an 8-4 lead heading into the eighth end and stole another point for a 9-4 lead. Jones picked up two points in the ninth end, but Sweeting was up three points coming home with the hammer and ran Jones out of rocks. “We think we’re playing pretty well. The 3-0, the record, is kind of a bonus. We’re just focusing on making our shots when we need to and even when you get a lead like that out there the teams are so good,” Sweeting said. Jones and her team of Kaitlyn Lawes, Jill Officer, Dawn McEwen, alternate Kirsten Wall and coach Janet Arnott started with the hammer and scored their deuce in the first end, followed by a steal of one point in the second for a 3-0 lead. However, Sweeting responded with a single point in the third and a steal of two in the fourth end after Jones’ final draw shot overcurled. The 3-3 tie was broken in the fifth end when Jones was forced to draw for one against two Sweeting counters, giving the Winnipeg team a 4-3 lead halfway through the game. 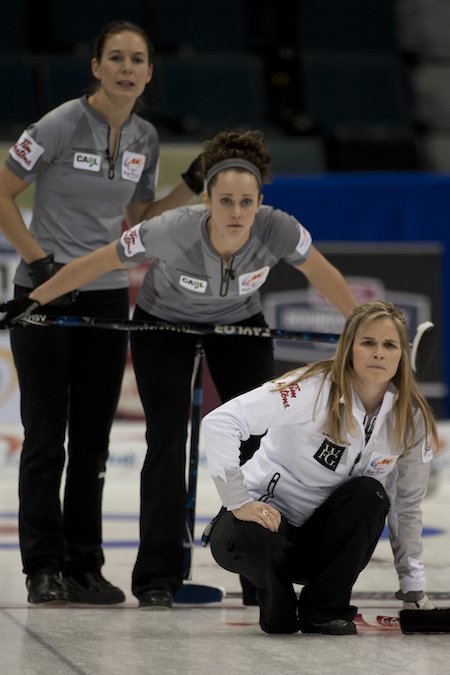 “We just missed a couple of bad shots and lost control of the game, that’s going to happen. We battled back and won one this morning and we kind of let one slip away tonight, but we’ll come back sharper tomorrow,” Jones said. In other Draw 5 action, Heather Nedohin (1-2) of Edmonton picked up her first win of the Tim Hortons Roar of the Rings with a 6-3 win over Coldwater, Ont.’s Sherry Middaugh (1-2). Meanwhile, Stefanie Lawton (1-2) of Saskatoon picked up a 7-6 victory over Grande Prairie, Alta.’s Renée Sonnenberg (1-2). Lawton was down 6-4 starting the eighth end but strung together a deuce and back-to-back steals for the victory. In the final game of the evening, Chelsea Carey (2-1) of Winnipeg picked up a wild win against Ottawa’s Rachel Homan (1-2). Homan led 7-5, but Carey put up a deuce in the eighth and stole two in the ninth. Homan had an open draw to the full 12-foot for two that would send the game into an extra end, but she came up light and lost 9-8. Draw 6 will feature the third round of men’s games of the round robin. The 0-2 Jeff Stoughton of Winnipeg will search for his first victory against Toronto’s John Epping (1-1). Mike McEwen of Winnipeg and Kevin Koe of Calgary are both looking for their first victories too, but it won’t be easy as they both play undefeated teams. McEwen will try to beat John Morris of Vernon/Kelowna, B.C., and Koe will take on Edmonton’s Kevin Martin. In the final game of Draw 6, the 1-1 Glenn Howard of Penetanguishene, Ont., will play the 2-0 team of Brad Jacobs from Sault Ste. Marie, Ont. The draw is scheduled for 8:30 a.m. (CST). All draws for the Tim Hortons Roar of the Rings will be televised live on TSN/RDS 2, the official broadcasting partner of the Season of Champions. Live scoring, statistics and updated draw brackets are available at: www.curling.ca/scoreboard/ To purchase tickets to the Tim Hortons Roar of the Rings, presented by Monsanto go to: www.curling.ca/2013roaroftherings-en/tickets/ The French version of this story will be available at www.curling.ca/2013roaroftherings-fr/ as soon as possible.