One end was the difference for Saskatoon’s Stefanie Lawton in her game against Winnipeg’s Chelsea Carey during Tuesday afternoon’s draw at the Tim Hortons Roar of the Rings, presented by Monsanto at the MTS Centre. 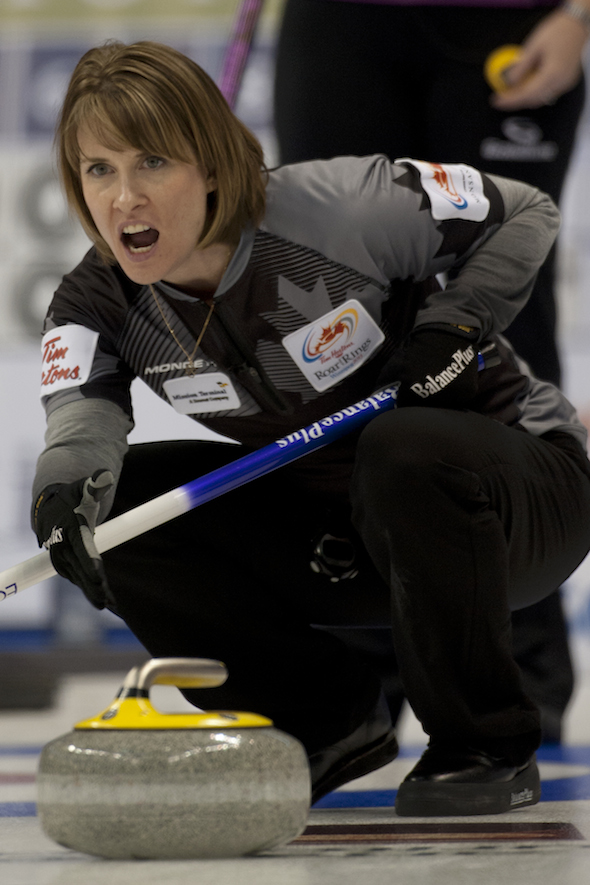 Lawton, Sherry Anderson, Sherry Singler, Marliese Kasner, alternate Cori Morris and coach Rick Folk, took control of the game in the eighth end with a four-ender en route to a 7-5 win. Carey attempted to raise her stone into two Lawton stones cemented on the button. However, the angle was off and all Carey could do was watch both of her rocks roll out of play. The mishap left Lawton with an open draw for four points and a 6-3 lead. Carey scored two in the ninth end, but couldn’t put together a steal in the 10th end for the win. Lawton’s win evens the teams in the standings with 2-2 records. “We seem to be getting stronger and stronger every game,” Lawton said. “So that’s definitely something that we’re looking forward to and keep that going.” The teams were tied 2-2 at the fifth-end break.  Carey started with the hammer and blanked the first end, allowing her to set up a deuce in the second. Lawton had an opportunity to take the lead in the third end, but couldn’t capitalize. Lawton had three stones in the top eight-foot and tried to come around them to tap back a Carey stone in the back eight. Lawton’s shot curled too much and she rubbed off her own rock in the top of the house, settling for a deuce and tying the game at 2-2. The loss is a setback for Carey and her team of Kristy McDonald, Kristen Foster, Lindsay Titheridge, alternate Breanne Meakin and coach Dan Carey. But they still consider themselves in the hunt for representing Canada at the 2014 Olympics in Sochi, Russia. “Round robins are amazing,” Carey said. “You can think you know all you want, and you don’t ever, it always changes at the end of the week. We said that all week. We can’t start looking at that stuff, all we get to do is win our games, do our best to win our games and then at the end of it, we’ll take a look at the scoreboard and see if we’re in the playoffs or not.” 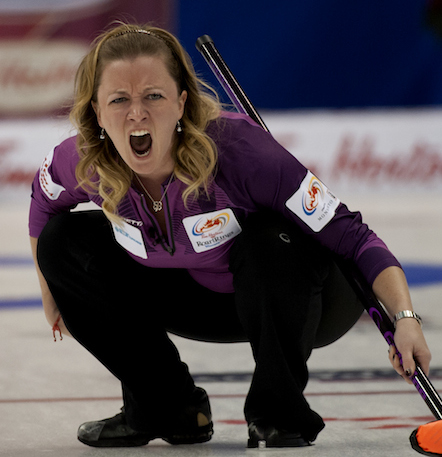 In other Draw 7 action, Winnipeg’s Jennifer Jones improved to 3-1 after breezing through a 7-2 victory over Renée Sonnenberg (1-3) of Grande Prairie, Alta. Sonnenberg started with the hammer but didn’t score until the sixth end when she was already trailing 4-0. Meanwhile, Heather Nedohin of the Saville Sports Centre in Edmonton edged clubmate Val Sweeting 6-5. Nedohin made a draw with backing to pick up the winning point in the tenth end. Nedohin’s victory improves her record to 2-2 and Sweeting dropped to 3-1. In the final game of Draw 7, Ottawa’s Rachel Homan (2-2) needed 11 ends to defeat Coldwater, Ont.’s Sherry Middaugh (1-3). Middaugh scored two with the hammer in the 10th end, but couldn’t pick up the steal in the 11th frame. Draw 8 will start tonight at 6:30 p.m. (CST). Glenn Howard (1-2) of Penetanguishene, Ont. and Edmonton’s Kevin Martin (3-0) will square off on MTS Centre ice for the first time since 2008 when both teams were in the Tim Hortons Brier final in Winnipeg. Toronto’s John Epping (1-2) will play Mike McEwen (1-2) of Winnipeg. John Morris (2-1) of Kelowna/Vernon B.C., will try to bounce back from this morning’s loss when he plays Winnipeg’s Jeff Stoughton (1-2). In the final game, Calgary’s Kevin Koe (0-3) will attempt to break his goose egg and secure his victory against the undefeated Brad Jacobs (3-0) of Sault Ste. Marie, Ont. All draws for the Tim Hortons Roar of the Rings will be televised live on TSN/RDS 2, the official broadcasting partner of the Season of Champions. Live scoring is available at: www.curling.ca/scoreboard/ To purchase tickets to the Tim Hortons Roar of the Rings, presented by Monsanto go to: www.curling.ca/2013roaroftherings-en/tickets/ The French version of this story will be available at www.curling.ca/2013roaroftherings-fr/ as soon as possible.