Glenn Howard was on the cusp of victory against Kevin Martin at the Tim Hortons Roar of the Rings, presented by Monsanto, during Tuesday night’s draw at the MTS Centre. 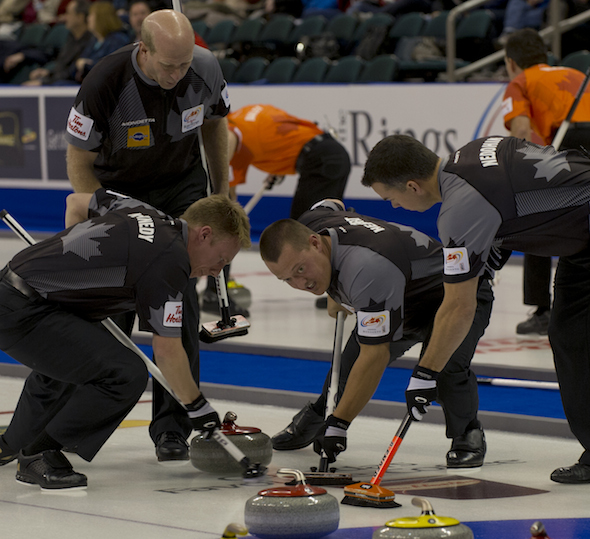 But Howard’s Olympics dream took a hit after giving up a four-ender and a steal of one in the ninth and 10th ends en route to a 9-7 loss to Martin. In the ninth end, Howard couldn’t freeze his shot stone on a cross-house hit and roll and allowed Martin an open hit for four and an 8-7 lead – his first of the game. Howard faced a busy house on his last rock in the 10th end and missed a runback double to sacrifice another point. “That’s the worst loss of my life right there,” Howard said. “Worst loss ever.” Before the Martin comeback, the majority of the game couldn’t have been any more textbook for Penetanguishene, Ont.’s Howard and his team of Wayne Middaugh, Brent Laing, Craig Savill, alternate Scott Howard and coach Scott Taylor. Howard limited Edmonton’s Kevin Martin to one and followed with a score of two for first seven ends of the game. 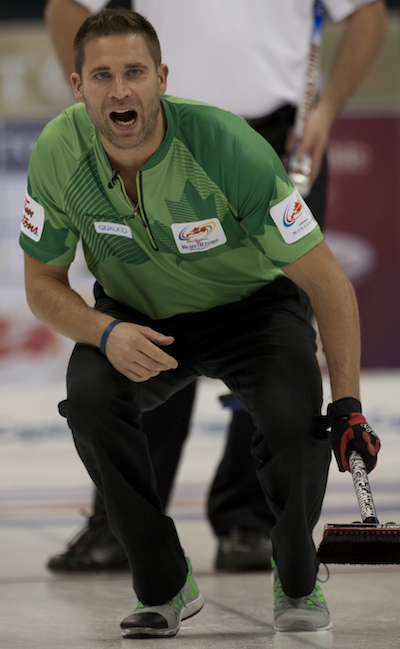 John Morris picked up his third win at the Roar of the Rings on Tuesday night. (Photo, CCA/Michael Burns)

Howard kept Edmonton’s Martin and his team of Dave Nedohin, Marc Kennedy, Ben Hebert, alternate Brad Gushue and coach Jules Owhar to single points in the first, third, and fifth ends. Howard made a hit for two in the second, and open draws in the fourth and sixth ends. The trend was broken in the eighth end when Howard attempted to tap his stone into Martin’s for two, but had to settle for one when he racked on a centre guard. “That was pretty much over after eight, one would think,” Martin said. “But we hung in there.” No matter what Martin tried, he seemed to be nearly always facing a few Howard counters on his last shot. Martin left his rock in the house on an attempted blank in the first, made a double for one in the third, a draw against three in the fifth and drew up to a Howard stone for one in the seventh. On the other side of the ice, Brad Jacobs of Sault Ste. Marie, Ont. improved to a 4-0 record after defeating Calgary’s Kevin Koe (0-4) 6-4 in eight ends. Koe narrowly missed an angle raise and gave up a steal of four in the eighth end. Meanwhile, Jeff Stoughton of Winnipeg dropped to 1-3 after conceding an 11-5 loss to Vernon/Kelowna, B.C.’s John Morris (3-1). Down 7-5 in the ninth, Stoughton flashed a double attempt and gave up four points to end the game. Lastly, Winnipeg’s Mike McEwen improved to 2-2 with a 10-7 win over John Epping (1-3) of Toronto. Tied at 7-7 in the ninth, McEwen scored three and ran Epping out of rocks in the 10th end. Draw 9 will start Wednesday morning at 8:30 a.m. (CST) and features the fifth match of the women’s round robin. Renée Sonnenberg (1-3) of Grande Prairie, Alta. will face Winnipeg’s Chelsea Carey (2-2). Stefanie Lawton (2-2) of Saskatoon will try and match Winnipeg’s Jennifer Jones’ 3-1 record. Rachel Homan of Ottawa and Edmonton’s Heather Nedohin will look to improve their 2-2 records when they play each other. In the final Draw 9 game, Edmonton’s Val Sweeting (3-1) will play Coldwater, Ont.’s Sherry Middaugh (1-3). All draws for the Tim Hortons Roar of the Rings will be televised live on TSN/RDS 2, the official broadcasting partner of the Season of Champions. Live scoring and standings are available at: www.curling.ca/scoreboard/ To purchase tickets to the Tim Hortons Roar of the Rings, presented by Monsanto go to: www.curling.ca/2013roaroftherings-en/tickets/ The French version of this story will be available at www.curling.ca/2013roaroftherings-fr/ as soon as possible.