One deuce was the difference for Ottawa’s Rachel Homan, who picked up a 5-3 victory over Heather Nedohin during the Wednesday morning draw at the Tim Hortons Roar of the Rings, presented by Monsanto, at the MTS Centre in Winnipeg. 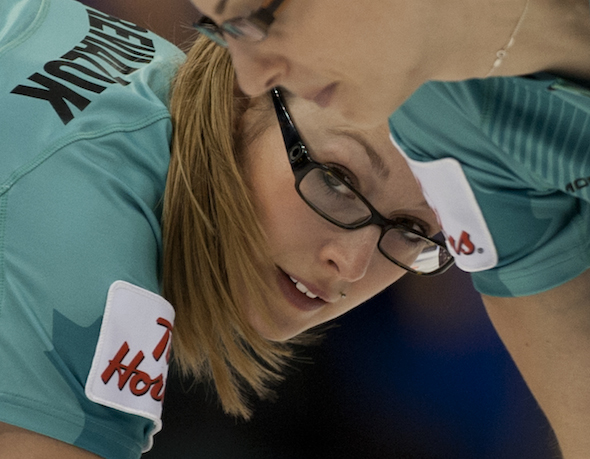 Halfway through the game and tied at 1-1, Homan, Emma Miskew, Alison Kreviazuk, Lisa Weagle, alternate Heather Smith, and coach Earle Morris, cracked the only multi-point score of the game with two points in the sixth end. Homan was looking at an empty house on her final shot, and opted to split her stones into the house using a corner guard for redirection. Homan’s shooter rolled to the back of the house and her guard just bit just enough of the 12-foot to give Homan a 3-1 lead. “We had the opportunity to split, I was looking at it before she even threw her last. I knew it was there and had to hit it in one spot, and we did. It was a great team shot,” Homan said.

Homan started with the hammer but blanked the first three ends. In the fourth, Nedohin put a top house guard in the eight-foot, cutting off Homan’s path to the button. Homan made a wide draw to the back four-foot for the first point of the game. Nedohin and her Edmonton team of Beth Iskiw, Jessica Mair, Laine Peters, alternate Amy Nixon, and coach Darryl Horne, couldn’t make much use of the hammer in the fifth end and were forced to take one with a draw against two Homan counters. The teams exchanged singles in the seventh and eighth ends, making the score 4-2. Nedohin made a draw for one against three Homan counters to trail 4-3 and head into the final frame without the hammer, which Homan ended with a takeout for one. Homan’s record improves to 3-2 and keeps her in the hunt for the playoffs. Nedohin drops to 2-3, but doesn’t consider herself out of the picture. “We’re at three (losses) and obviously we’re at the breaking point, but again I can’t stress I thought we played a decent game,” Nedohin said. “That two point conversion was a bit of an ‘oops’ on our behalf, but you know, we’ve got to control our own destiny from here on in.” In other Draw 9 matches, Jennifer Jones (4-1) of Winnipeg took control of the leaderboard with an 8-3 win in nine ends against Stefanie Lawton (2-3) of Saskatoon. Jones made a triple in the seventh for a 6-2 lead to put the game out of reach for Lawton. Jones wasn’t the only Winnipeg team to pick up a victory on Wednesday morning. Chelsea Carey (3-2) defeated Grande Prairie, Alta.’s Renée Sonnenberg (1-4) by a score of 6-4. The teams exchanged singles and one deuce each through most of the game, but Carey stole a single point in the 10th end. In the last game, Sherry Middaugh (2-3) of Coldwater, Ont. came from behind to beat Val Sweeting (3-2) of Edmonton 7-6. Middaugh, who gave up a three ender in the fifth, scored three points of her own in the last end to come back from a 6-4 deficit. The men will play their only game on Wednesday in the afternoon draw at the Tim Hortons Roar of the Rings. The undefeated Brad Jacobs of Sault Ste. Marie, Ont. plays Vernon/Kelowna, B.C.’s John Morris (3-1). Kevin Martin of Edmonton will also try and stay undefeated when he plays Toronto’s John Epping (1-3). Penetanguishene, Ont.’s Glenn Howard (1-3) will try to find the win column against Winnipeg’s Mike McEwen who, at 2-2, is trying to stay in the playoff hunt. Kevin Koe of Calgary will seek his first win against Jeff Stoughton of Winnipeg (1-3). All draws for the Tim Hortons Roar of the Rings will be televised live on TSN/RDS 2, the official broadcasting partner of the Season of Champions. Live scoring and standings are available at: www.curling.ca/scoreboard/ To purchase tickets to the Tim Hortons Roar of the Rings, presented by Monsanto go to: www.curling.ca/2013roaroftherings-en/tickets/ The French version of this story will be available at www.curling.ca/2013roaroftherings-fr/ as soon as possible.