Jacobs, Martin headed to Roar of the Rings showdown

Brad Jacobs picked up an 8-6 victory over John Morris to remain undefeated at the Tim Hortons Roar of the Rings, presented by Monsanto. 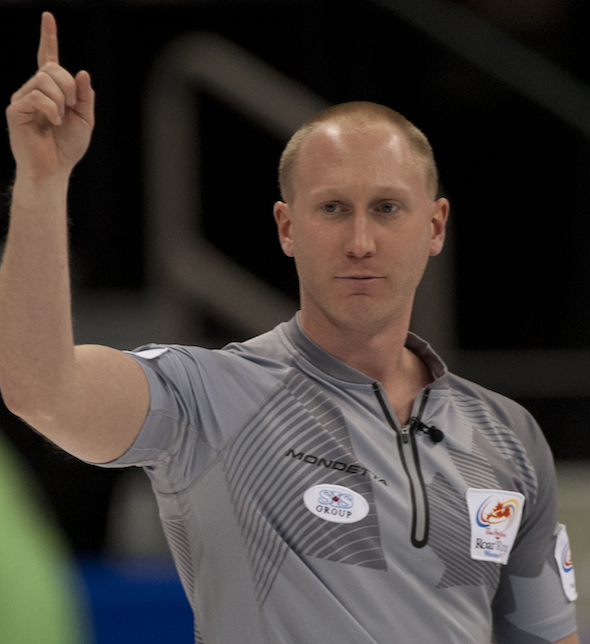 Brad Jacobs is a win away from a berth in Sunday’s final at the Tim Hortons Roar of the Rings. (Photo, CCA/Michael Burns)

Jacobs and his crew led by four points early in the game, but Morris made sure the Jacobs team had to fight until the bitter end on Wednesday afternoon at the MTS Centre in Winnipeg. Morris was down two with the hammer in the final end and split the house with one rock on each side after Team Jacobs third Ryan Fry attempted a peel but could only tick it and remove two Jacobs stones sitting in the four-foot. Jacobs made a cross-house double with his first shot to sit one and Jim Cotter, throwing fourth for Morris, attempted a freeze but was light. Jacobs picked the stone out for the victory. “It looked like as long as they made all their shots they were gonna get an automatic deuce and we were going to go into an extra,” Jacobs said. “It was nice enough they missed that last freeze and gave us a good opportunity at that double.” 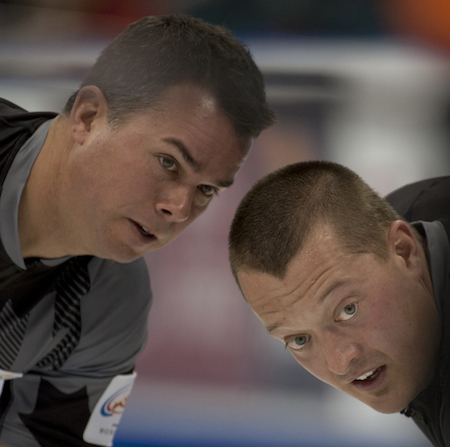 Jacobs, of Sault Ste. Marie, Ont., and teammates Fry, E.J. Harnden, Ryan Harnden, alternate Caleb Flaxey and coach Tom Coulterman, cracked the scoreboard early, putting up four points. Cotter threw his last stone draw a hair inside and rubbed off a centre guard. The rock came to rest in the back four-foot circle, but was still open. Jacobs took advantage of the miss and hit a straight-back double for four points and a 5-1 lead. Morris and his Vernon/Kelowna, B.C. team of Cotter, Tyrel Griffth, Rick Sawatsky, alternate Jason Gunnlaugson and coach Pat Ryan, were down but not out. After giving up the big end, the teams exchanged singles before Morris put up a deuce in the seventh end and stole another two in the eighth. Jacobs tried getting to the inside of a Morris stone sitting on the button but was outside the broom and gave up the steal for a 6-6 tie. In the ninth end Jacobs scored two to lead 8-6 in the 10th end without hammer. “They’re all big games,” said Cotter. “Definitely we’re going to come back firing on all cylinders there tomorrow.” Jacobs isn’t the only team with an undefeated record and having nailed down one of the three available playoff berths. Kevin Martin (5-0) continued his roll at the Tim Horton Roar of the Rings. The Edmonton skip, and defending Olympic gold-medallist, had a four-ender of his own against Toronto’s John Epping (1-4) on way to 9-5 win in nine ends. Jacobs will take on Martin Thursday at 6:30 p.m. in a game that will decide first place in the round robin and a bye to Sunday afternoon’s final. One sheet over, Jeff Stoughton (2-3) kept his playoff hopes alive with a 10-6 win over Calgary’s Kevin Koe (0-5) in eight ends. In the final game of the draw, Penetanguishene, Ont.’s Glenn Howard (2-3) edged Mike McEwen (2-3) of Winnipeg 6-5. Tied at 5-5 Howard controlled the 10th end with the hammer and made a draw for the winning point. Draw 11 will start at 6:30 p.m. (CST) for the women. Ottawa’s Rachel Homan (3-2) will try and even her record with Winnipeg’s Jennifer Jones (4-1) who sits at the top of the standings. Val Sweeting (3-2) of Edmonton will try to keep pace in the standings when she takes on Winnipeg’s Chelsea Carey (3-2). Sherry Middaugh (2-3) of Coldwater, Ont. will try and get her second win of the day, this time against Renée Sonnenberg (1-4) of Grande Prairie, Alta. In the final game, Edmonton’s Heather Nedohin and Saskatoon’s Stefanie Lawton, both with 2-3 records, will try to get a win in order to keep pace with the pack. All draws for the Tim Hortons Roar of the Rings will be televised live on TSN/RDS 2, the official broadcasting partner of the Season of Champions. Live scoring and standings are available at: www.curling.ca/scoreboard/ To purchase tickets to the Tim Hortons Roar of the Rings, presented by Monsanto go to: www.curling.ca/2013roaroftherings-en/tickets/ The French version of this story will be available at www.curling.ca/2013roaroftherings-fr/ as soon as possible.