Jennifer Jones is one win away from representing Canada at the 2014 Winter Olympics. Jones came from behind to defeat Ottawa’s Rachel Homan 7-6 in front of a hometown crowd at the MTS Centre during the Wednesday evening draw at the Tim Hortons Roar of the Rings, presented by Monsanto. 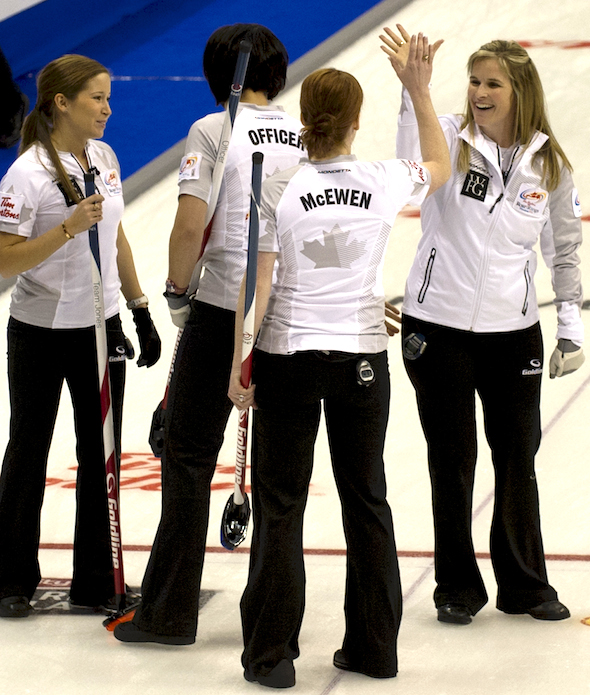 “We battled back again and really hung in there and made a couple great shots in that last end,” Jones said, who is now 5-1. “You know, made the draw and it worked out really well for us.” Heading into the final end without the hammer, Jones and her team of Kaitlyn Lawes, Jill Officer, Dawn McEwen, alternate Kirsten Wall and coach Janet Arnott placed their final rock into a pocket of Homan stones in the four-foot. Homan needed a piece of the button to seal the victory, but sent her stone into the back of the house. “We did everything we could,” Homan said after the loss that dropped her record to 3-3. “We anticipated the fudge and it just wasn’t there. And I’m really proud of my team. We had a heck of a game and we deserved that win but that’s all right. They got away with one and we’ll get them back.” Jones opened the game with a blank end hoping for a crooked number score in the second. However, Homan limited Jones’s chances and forced her to hit and stick for a single. Jones returned the favour and forced Homan to one point in the third. With some rocks in play behind a corner guard Jones drew into a bank of stones behind cover to sit two and Homan had to draw up to it for a single. 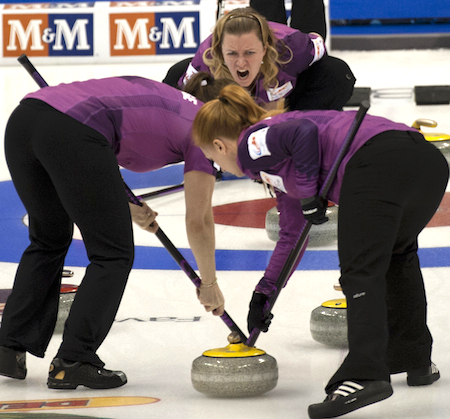 Homan attempted to keep Jones to one point in the fourth end, but narrowly missed a triple takeout allowing Jones to score two and take a 3-1 lead. However, Homan answered back with a score of three points in the fifth end. The Ottawa skip made an across-the-face double for three after Jones mismanaged the placement of her final stone. At the break, Homan led 4-3. In the sixth end, Jones jammed a hit and watched Homan’s rock roll to the four-foot for a steal of one and trailed Homan 5-3 after six ends. Jones bounced back with a draw for two in the seventh to tie the game at 5-5, forcing Homan to one in end eight and a scoring a single of her own in the ninth to tie the game at 6-6, coming home without the hammer. In other Draw 11 action, Chelsea Carey of Winnipeg stole a point in the final end to defeat Edmonton’s Val Sweeting 6-4. Sherry Middaugh of Coldwater, Ont. squeaked out a 7-6 extra end victory over Grande Prairie, Alta.’s Renée Sonnenberg. In the final game of the evening, Heather Nedohin of Edmonton stole a point in the 10th end to defeat Saskatoon’s Stefanie Lawton 6-4. The women take to the ice again for the final women’s round-robin game of the Tim Hortons Roar of the Rings on Thursday at 1:30 p.m. Playoff contention is on the line. Carey (3-3) will play Middaugh (3-3). Nedohin (3-3) will try to keep her playoff hopes alive against Jones. Lawton (2-4) will try and play spoiler against Homan. Sweeting (3-3) will play Sonnenberg (1-4) in the final game. All draws for the Tim Hortons Roar of the Rings will be televised live on TSN/RDS 2, the official broadcasting partner of the Season of Champions. Live scoring and standings are available at: www.curling.ca/scoreboard/ To purchase tickets to the Tim Hortons Roar of the Rings, presented by Monsanto go to: www.curling.ca/2013roaroftherings-en/tickets/ The French version of this story will be available at www.curling.ca/2013roaroftherings-fr/ as soon as possible.