Jacobs reaches Roar of the Rings final with win over Martin

Brad Jacobs and his team from Sault Ste. Marie, Ont., have booked a spot in the men’s final after defeating Edmonton’s Kevin Martin 5-4 at the Tim Hortons Roar of the Rings, presented by Monsanto. 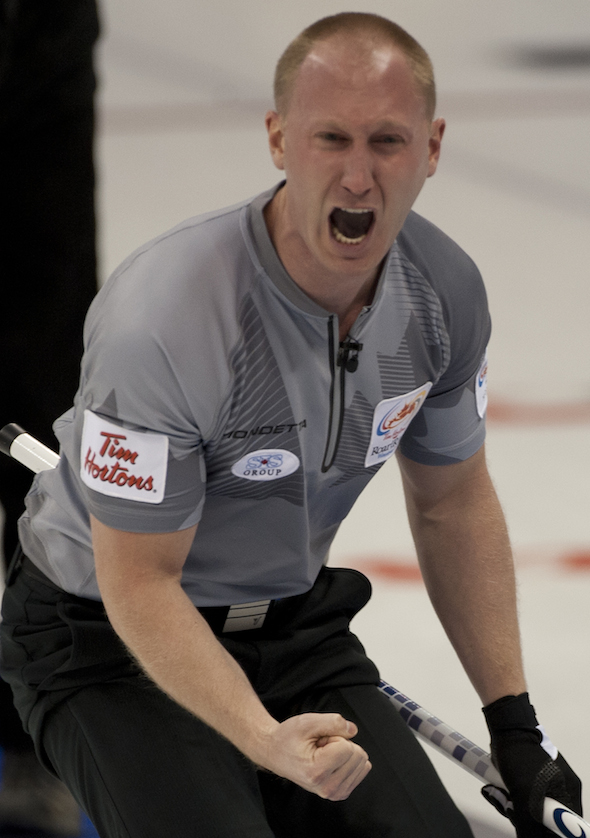 Jacobs, Ryan Fry, E.J. Harnden, Ryan Harnden, alternate Caleb Flaxey and coach Tom Coulterman brought the MTS Centre crowd of 8,635 to their feet after connecting on a double runback to remove Martin’s second shot stone and pick up two points in the 10th end for the win. “We’re ecstatic right now,” Jacobs said. “We’ve got an opportunity to go to the Olympics and we’re thrilled.” The game, which featured the last two undefeated teams, wasn’t flawless. Both teams thought there was room for improvement in a game filled with missed chances and a hogged rock from Martin’s third Dave Nedohin. “It was definitely an interesting game from the first end on with the red light, and they had us for four in the second, but didn’t take it. And then we had ‘em and so on, so on, so on,” said Martin, a two-time Canadian Curling Trials champ and the defending Olympic gold-medallist. “In all honesty, I thought it was pretty sloppy, I think, by both teams,” Jacobs said. “But we hung in there, we dug deep and the boys just pounded that last one. It was a pretty easy line call.” Jacobs and Martin exchanged singles in the first three ends before Martin tacked on a steal in the fourth, taking a 3-1 lead. After a blanked fifth end, Jacobs scored two, tying the game with the first multi-point end to even the score at 3-3. 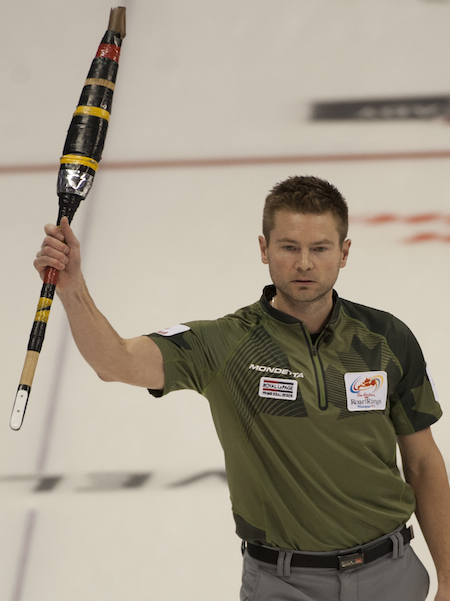 Martin, Nedohin, Marc Kennedy, Ben Hebert, alternate Brad Gushue and coach Jules Owchar picked up a single in the seventh end and Jacobs blanked the eighth and ninth in order to keep the hammer in the last end. The playoff picture became a little clearer at the end of Draw 13. Winnipeg’s Jeff Stoughton received a standing ovation, but not for the reason he hoped. Stoughton lost 9-6 to fellow ’Pegger Mike McEwen and is now officially eliminated from reaching the playoffs with a 2-4 record. McEwen’s Olympic chances are still intact with a record of 3-3 thanks to scoring four in the third and three in the eighth. Calgary’s Kevin Koe (1-5) picked up his first victory at the Tim Hortons Roar of the Rings, defeating Glenn Howard (2-4) of Penetanguishene, Ont., 7-6. Howard crawled back into the game from a 4-0 deficit, but couldn’t steal in the 10th end. Howard has also been eliminated from the playoffs. John Morris of Vernon/Kelowna, B.C. improved to 4-2 with his victory over Toronto’s John Epping (1-5). Morris scored a point in the 10th end to edge Epping 7-6. The men will play the final game of the round robin Friday morning at 8:30 a.m. (CST). Former teammates and 2010 Olympic gold medallists Morris and Martin will face off in one of the most anticipated games of the Tim Hortons Roar of the Rings. Morris will try to get the win over his former teammate, which would give them matching records to end the round robin and set up a tantalizing rematch in the men’s semifinal Saturday at 1:30 p.m. McEwen is in a must-win situation when he plays Koe on Friday. He’ll also be keeping an eye on Morris’s game. A Morris loss combined with a McEwen win will make for a tiebreaker between the two teams on Friday at 1:30 p.m. Other games in Draw 14 include: Stoughton against Howard and Epping taking on Jacobs. All draws for the Tim Hortons Roar of the Rings will be televised live on TSN/RDS2, the official broadcasting partner of the Season of Champions. Live scoring and standings are available at: www.curling.ca/scoreboard/ To purchase tickets to the Tim Hortons Roar of the Rings, presented by Monsanto go to: www.curling.ca/2013roaroftherings-en/tickets/ The French version of this story will be available at www.curling.ca/2013roaroftherings-fr/ as soon as possible.