Jacobs in final, Morris vs. Martin in semi at Roar of the Rings

John Morris was on the losing side of a 7-6 extra-end loss to former teammate Kevin Martin in the Friday morning draw, but will still move into the playoffs at the Tim Hortons Roar of the Rings, presented by Monstanto, at the MTS Centre. 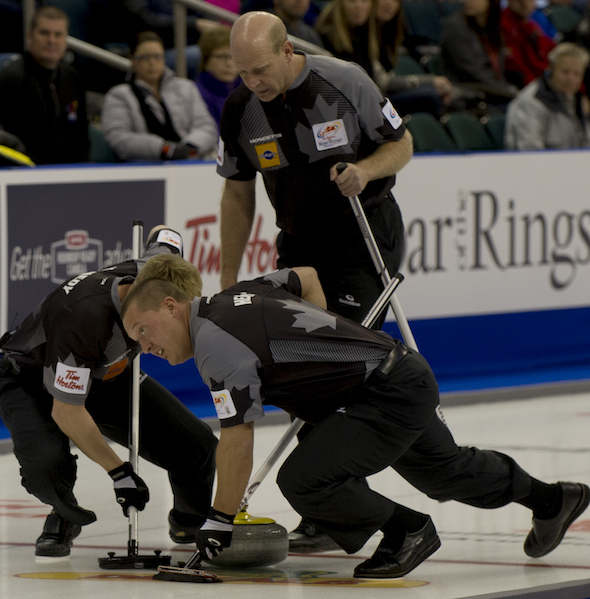 Martin and his Edmonton team of Dave Nedohin, Marc Kennedy, Ben Hebert, alternate Brad Gushue and coach Jules Owchar placed a draw in the eight-foot to secure the victory and lock up second place in the round-robin standings with a 6-1 record.  Morris and his Vernon/Kelowna, B.C., team of Jim Cotter (throwing fourth), Tyrel Griffith, Rick Sawatsky, alternate Jason Gunnlaugson, and coach Pat Ryan, took third place with a 4-3 record, but they’re happy to be one game away from the Tim Hortons Roar of the Rings final. “We’re feeling really good going into the playoffs,” Morris said. “I think if you would had asked us at the start of the year if we had to beat Kevin Martin and Brad Jacobs to win the Trials, we would have been pretty happy with that, especially not having a berth here.” The two teams will play once again, this time for a spot in the Tim Hortons Roar of the Rings final against Brad Jacobs. The semifinal match is scheduled for Saturday afternoon at 1:30 p.m. (all times CST). “It’ll be a tight game again tomorrow,” Martin said. “It was good. It was good to get through that one and get hammer in the semi so we’ll hopefully play another good game tomorrow.” 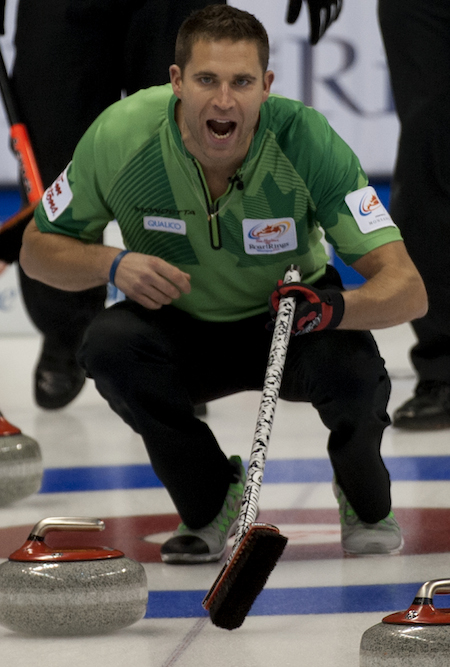 Martin cracked a three-ender in the sixth end to take a 5-3 lead. Morris blanked the next end, but Martin followed up with a steal to increase the deficit to three points. However, Morris blanked the ninth end and scored two points in the 10th to send the game into an extra end. Jacobs of Sault Ste. Marie, Ont., could become the first team in Canadian Curling Trials history to run the table. Jacobs finished the round robin with a flawless 7-0 record after picking up a 7-4 victory over John Epping of Toronto. Jacobs will have a chance to put his name in the record book if he wins the final scheduled for 2 p.m. on Sunday. Meanwhile, Kevin Koe (2-5) of Calgary shut the door on the Olympic dreams of Mike McEwen from Winnipeg. Koe drew to the button for one point in the last end to defeat McEwen 5-4. McEwen’s record of 3-4 will keep him out of the playoffs. If McEwen had won, he would have forced a tiebreaker against Morris. In a game with no playoff implications, Jeff Stoughton of Winnipeg defeated Glenn Howard of Penetanguishene, Ont., by a score of 9-3. The teams entertained the crowd with a high scoring skins-style game that featured Stoughton briefly sporting a tuque and Howard sliding to all the way down to the house, rock in hand, and placing it on the button before shaking hands. Both teams left the ice to a standing ovation. The completion of the final round-robin draw at the Tim Hortons Roar of the Rings means the playoffs are just around the corner and every win will be crucial. Two women’s teams are on the cusp of the playoffs, but will need one more game to determine who advances. Winnipeg’s Chelsea Carey and Sherry Middaugh of Coldwater, Ont., both with 4-3 records, will play a tiebreaker at 1:30 p.m. (all times CST). The winner will play Rachel Homan of Ottawa in the semifinal tonight at 6:30 p.m. All draws for the Tim Hortons Roar of the Rings will be televised live on TSN/RDS2, the official broadcasting partner of the Season of Champions. Live scoring and standings are available at: www.curling.ca/scoreboard/ To purchase tickets to the Tim Hortons Roar of the Rings, presented by Monsanto go to: www.curling.ca/2013roaroftherings-en/tickets/ The French version of this story will be available at www.curling.ca/2013roaroftherings-fr/ as soon as possible.