Sherry Middaugh and her Coldwater, Ont., team survived the tiebreaker by defeating Chelsea Carey of Winnipeg 6-3 to advance to the semifinal at the Tim Hortons Roar of the Rings, presented by Monsanto, at the MTS Centre on Friday afternoon. 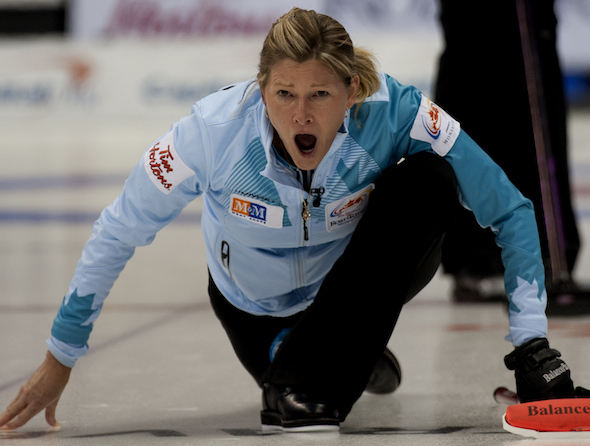 The eighth end was key for Middaugh and her team of Jo-Ann Rizzo, Lee Merklinger, Leigh Armstrong, alternate Lori Eddy, and coach Bob Turcotte. After a few misses by Carey’s team, Middaugh put the pressure on by making Carey shoot against three on her first shot of the end. Carey made a double, but didn’t have any choice but to leave her shooter open and allow a hit for two. The deuce put Middaugh up 4-2. “You certainly don’t expect that. You expect to get a half shot, not a total miss; I wasn’t expecting that,” Middaugh said. “But yeah, then we took advantage of that.” Middaugh forced Carey to one in the ninth with a draw against four. The Ontario team finished the game by tacking on another deuce in the 10th end for the win, which put Middaugh and Co. in Friday night’s 6:30 p.m. (all times CST) semifinal against Ottawa’s Rachel Homan. 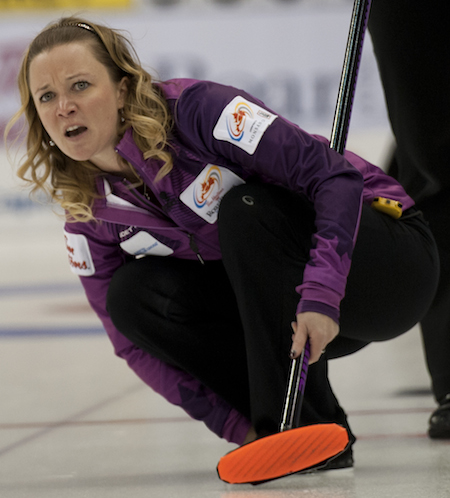 Winnipeg’s Chelsea Carey was eliminated from the Tim Hortons Roar of the Rings after faling to Sherry Middaugh in the tiebreaker. (Photo, CCA/Michael Burns)

“It would be nice just to get in the playoffs clear and free, but it’s not so bad having a game,” Middaugh said. “And it’s a quick turnaround, but that’s OK. That’s why we’re conditioned and that’s what we play for all year.” The loss means that Carey and teammates Kristy McDonald, Kristen Foster, Lindsay Titheridge, alternate Breanne Meakin, and coach Dan Carey, have been eliminated from the Tim Hortons Roar of the Rings. But Carey believes they’ve proved their skill to the nation. “We’ve proved that we belong here,” Carey said. “And we’ve proved that before. But for whatever reason nobody believes it. So maybe if we keep proving it, eventually people will catch up because we earned the right to be here and that was a very difficult thing to do.” There wasn’t a lot of offence in the first half of the game. Middaugh picked up a single point in the first end followed by back-to-back blanks in the second and third ends. Middaugh, facing one in the fourth without hammer, opted to block Carey’s draw path for two and force her to make a difficult long angle raise on a corner guard. Carey threw heavy and was forced to one, tying the game at 1-1. Carey returned the favour in the fifth, corner freezing on Nedohin’s shot stone and forcing the Coldwater, Ont., skip to follow her path in and take one for a 2-1 lead. The semifinal winner will advance to the Tim Hortons Roar of the Rings women’s final on Saturday night at 6:30 p.m. against Jennifer Jones (6-1) of Winnipeg. “We had a great game against (Homan) in the round robin,” Middaugh said. “We know how skilled they are. It’s just a matter of how are we going to get some multiple points on them because we know (lead) Lisa (Weagle) makes the tick shots.” Live scoring and standings are available at: www.curling.ca/scoreboard/ To purchase tickets to the Tim Hortons Roar of the Rings, presented by Monsanto go to: www.curling.ca/2013roaroftherings-en/tickets/ The French version of this story will be available at www.curling.ca/2013roaroftherings-fr/ as soon as possible.