It will be a battle-tested team that that has been nominated to play for a third consecutive wheelchair curling gold medal for Canada at the 2014 Paralympic Winter Games, March 7 to 16 in Sochi, Russia, it was announced today by the Canadian Curling Association and Canadian Paralympic Committee. 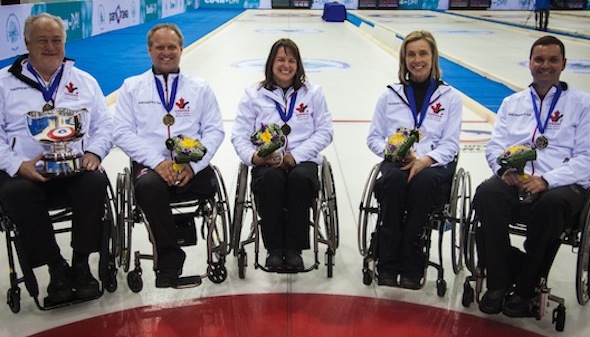 It’s the same team that claimed gold at the 2013 World Wheelchair Curling Championship last February at the Ice Cube Curling Center in Sochi — the official test event for the Paralympics. The team will consist of skip Jim Armstrong (Cambridge, Ont.), vice-skip Dennis Thiessen (Sanford, Man.), second Ina Forrest (Armstrong, B.C.), lead Sonja Gaudet (Vernon, B.C.) and alternate Mark Ideson (London, Ont.). Joe Rea (Prince George, B.C.), will be the Coach while Wendy Morgan (Burlington, Ont.) will be the Team Leader. To view team bios, please visit paralympic.ca or click here. The Canadian Paralympic Wheelchair Curling team for Sochi 2014 will open its schedule on March 8 against Great Britain. The full Canadian Paralympic Team will be officially unveiled in February 2014. “We couldn’t be happier with the team we’ve nominated to send to Sochi, and we’re confident this group of athletes gives us our best possible chance to win an unprecedented third Paralympic gold medal,” said CCA Chief Executive Officer Greg Stremlaw. “The next three months will focus on the finer details to be at our best come March 7.” Armstrong, Forrest, Gaudet, Rea and Morgan were all part of the team that won gold at the 2010 Paralympic Winter Games in Vancouver, while Gaudet, Rea and Morgan were part of Team Canada when wheelchair curling made its debut as a Paralympic medal sport in 2006 in Turin, Italy. Thiessen and Ideson will be making their Paralympic debuts in Sochi. “I feel very good about this lineup going into the Paralympic Winter Games,” said Rea. “Prior to the 2013 World Championship, we knew there was some exceptional talent, but there’s always a question about how a new lineup will come together. The group worked extremely well together in Sochi, and since then the commitment, on and off the ice, from all five athletes has been amazing.” Sonja Gaudet is the world’s most decorated wheelchair curler. Inducted into the Canadian Curling Hall of Fame in 2013, Gaudet will be seeking her third Paralympic gold medal to go along with three World Championship titles (2009, 2011, 2013). She is the only wheelchair curler in Paralympic history to have won two Paralympic gold medals. Armstrong also is a member of the Canadian Curling Hall of Fame, having played in six Briers — the Canadian Men’s Curling Championship — before severe knee issues prompted him to take up wheelchair curling in 2007. He, too, is a three-time Word Wheelchair Curling Champion, as is Forrest. “This is without a doubt the most experienced and accomplished squad that Canada could possibly field in wheelchair curling,” said Team Canada Chef de Mission Ozzie Sawicki. “They have proven consistently that they are at the top of their game and I can’t wait to watch them take on the world in Sochi.” “Congratulations to the curlers who have been nominated to represent Canada in wheelchair curling at the 2014 Paralympic Winter Games,” said the Honourable Bal Gosal, Minister of State (Sport). “Canada’s wheelchair curling teams have a proud history of success at the Winter Games, and have proven time and time again that they are among the best in the world. Our government is proud of your accomplishments and wish you the best of luck as you prepare for the Games in Sochi.“ The Sochi 2014 Paralympic Winter Games will take place from March 7 to 16, 2014. With a goal of placing in the top three nations in the gold medal count, Canada will send 50 athletes to compete in sledge hockey, wheelchair curling, para-Nordic skiing, biathlon, para-alpine skiing and para-snowboard. Upcoming Canadian Paralympic Team nomination announcement events include sledge hockey on Jan. 18, para-alpine skiing on Jan. 21 and para-snowboard on Jan. 26. With 100 days to go to the Sochi 2014 Paralympic Winter Games, the Canadian Paralympic Committee (CPC) unveiled an unprecedented, fully accessible broadcast and electronic media plans for the most comprehensive coverage ever offered in Canada for a Paralympic Games – more than 65 hours of broadcast, up to 350 hours of digital streaming, and rights free news access highlights connecting Canadians via multi platforms. CPC will lead the Paralympic Broadcast Consortium partners in creating coverage on five broadcast/digital platforms: CBC/Radio-Canada, Sportsnet, Accessible Media Inc. (AMI), Yahoo Sports Canada and SendtoNews. About the Canadian Curling Association The Canadian Curling Association (CCA) is the national sport governing body responsible for the development, promotion and organization of curling in Canada. In cooperation with its Provincial and Territorial Member Associations from across Canada, the CCA provides programs and services to curlers ranging from the youngest ‘little rocker’ (age 7 and up), to those participating at ages 70 and over – and from aspiring Olympians to Canadians with special needs, coaches, curling facility operators, ice makers and officials. The CCA also oversees and provides the comprehensive management of the Season of Champions event portfolio; develops and administers the Canadian Team Ranking System (CTRS) for Olympic qualification; and organizes and operates the championship system for Juniors (under 20), Seniors (over 50), Mixed, Women, Men, University and Wheelchair. About the Canadian Paralympic Committee The Canadian Paralympic Committee is a non-profit, private organization with 25 member sports organizations dedicated to strengthening the Paralympic Movement. The Canadian Paralympic Committee’s vision is to be the world’s leading Paralympic nation. Its mission is to lead the development of a sustainable Paralympic sport system in Canada to enable athletes to reach the podium at the Paralympic Games. By supporting Canadian high performance athletes with a disability and promoting their success, the Canadian Paralympic Committee inspires all Canadians with a disability to get involved in sport through programs delivered by its member organizations. For more information, visit www.paralympic.ca