Jones headed to Sochi after Roar of the Rings triumph

Every athlete dreams of winning big in front of a home crowd and Jennifer Jones did just that Saturday night at Winnipeg’s MTS Centre.

Jones defeated Sherry Middaugh of Coldwater, Ont., 8-4 in the Tim Hortons Roar of the Rings, presented by Monsanto, final and has earned the right to represent Canada at the 2014 Winter Olympics in Sochi, Russia. This is the first time Jones, or any of her teammates, have represented Canada at the Olympic level. The team also has earned the right to compete at the 2014 World Financial Group Continental Cup next month in Las Vegas. “You dream of it since you’re a little kid and we’ve had many dreams come true, but this is so rare — this opportunity. Our dreams came true today in the most amazing way. It’s unbelievable,” Jones said moments after stepping off the ice from her victory. Two scores of three helped secure the victory for Jones and her team of Kaitlyn Lawes, Jill Officer, Dawn Askin, alternate Kirsten Wall and coach Janet Arnott. The first score of three was in the second end. Middaugh and her Coldwater, Ont., team of Jo-Ann Rizzo, Lee Merklinger, Leigh Armstrong, alternate Lori Eddy and coach Bob Turcotte were heavy on their draw and Jones made a double to lead 3-0. The early score put Middaugh in a tight spot and was the turning point of the game. “It was dropping that three and getting down. We needed rocks in play and they certainly weren’t going to do that,” Middaugh said. “Unfortunately that was it. Just that three points. I mean, we battled back and then we gave them that other three when we needed to force. Unfortunately when you force, sometimes you give up a big end.” 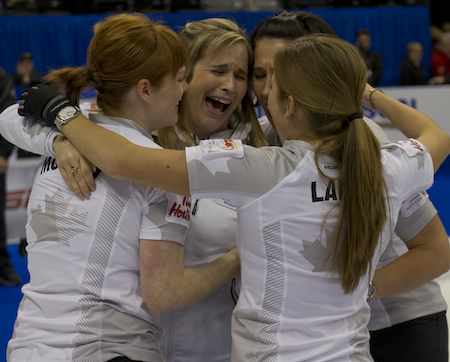 Team Jones celebrates its victory on Saturday at the Tim Hortons Roar of the Rings. (Photo, CCA/Michael Burns)

The second score of three was the one to deflate any chance of a Middaugh comeback. With her final shot, Jones crept around a guard and made a hit for three, increasing her lead from 4-3 to 7-3, heading into the eighth end. “My team played outstanding today. Like in the biggest games of our lives they came out to play and that says a lot about how hard we worked and just how well we worked together as a team,” Jones said. After scoring their second three-ender, the Jones team stuck to a defensive game plan. Middaugh had the opportunity to blank the eighth end, but opted to take a point. Jones took a single in the ninth and ran Middaugh out of rocks in the 10th to end the game and begin their celebration of Olympic proportions. Only one half of Canada’s representation in curling at the Olympics has been determined. Brad Jacobs of Sault Ste. Marie, Ont., and John Morris of Vernon/Kelowna, B.C., will square off on Sunday at 2 p.m. (CST) in the Tim Hortons Roar of the Rings men’s final. The winner will join Jones on their trip to Russia as part of Team Canada and will have also earned the right to compete at the 2014 World Financial Group Continental Cup. All draws for the Tim Hortons Roar of the Rings will be televised live on TSN/RDS2, the official broadcasting partner of the Season of Champions. Live scoring and standings are available at: www.curling.ca/scoreboard/ To purchase tickets to the Tim Hortons Roar of the Rings, presented by Monsanto go to: www.curling.ca/2013roaroftherings-en/tickets/ The French version of this story will be available at www.curling.ca/2013roaroftherings-fr/ as soon as possible.