It can be hard to watch a best friend in a bad situation, but that’s what John Morris had to do in order to lock up his spot in the Tim Hortons Roar of the Rings, presented by Monsanto, at the MTS Centre. 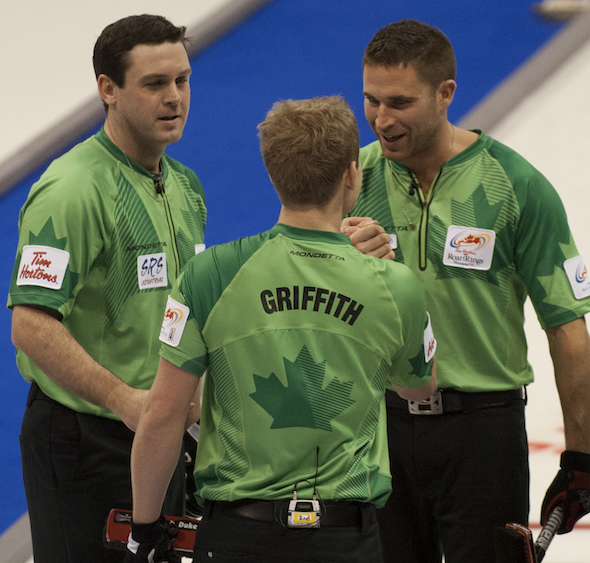 Morris and his Vernon/Kelowna, B.C., team defeated Kevin Martin of Edmonton 7-5 in the semifinal on Saturday afternoon to get into the final. “It’s sort of bittersweet because I’ve played with those guys for so many years,” Morris said. “Ben and Marc are two of my best friends still.” Morris will play Brad Jacobs of Sault Ste. Marie, Ont., on Sunday at 2 p.m. (all times CST). Both teams qualified for this event through the Capital One Road to the Roar in Kitchener, Ont., early November. Morris and his team of Jim Cotter (throwing fourth stones), Tyrel Griffith, Rick Sawatsky, alternate Jason Gunnlaugson and coach Pat Ryan took control of the game in the sixth end. Trailing 3-1, Martin couldn’t get the placement right on either of his shots and allowed Cotter a double for two points to tie the game 3-3. “Getting a deuce in an even end to get a point is big. Especially in a game that’s that tight,” Morris said. “That gave them a deuce they should have never had got to tie the game,” sad Martin, who along with Morris, second Marc Kennedy and lead Ben Hebert won the 2010 Olympic gold medal in Vancouver. “Otherwise we would have been one up after six, with. That’s a pretty good situation.” Morris forced Martin to one in the seventh and his team scored two more (almost three on a measure) in the eighth end for a 5-4 lead. Martin played an open ninth end, but hit a Morris stone on the beak with his last to tie the game on a blank attempt. The mishap allowed Morris pick up another deuce and win 7-5. “We seem to be playing our best curling right now and I’m just real proud of the guys for coming through so far,” Morris said. To start the game Martin, Martin blanked the first end and was looking for a score of two or more in the second. In an end filled with momentum changes, Martin hit a triple with his first stone to suddenly sit one. Cotter hit and rolled but couldn’t get enough cover and it set up a two-point end for Martin. 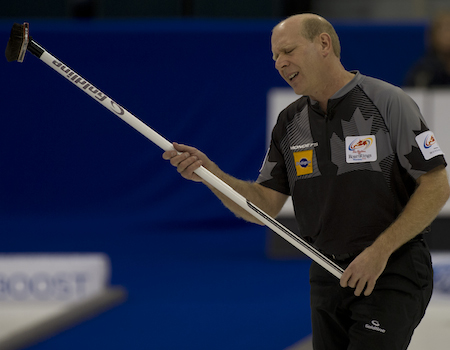 Martin and his team of Dave Nedohin, Kennedy, Hebert, alternate Brad Gushue and coach Jules Owchar, continued to mount pressure in the next end, making a short double runback to sit two and force Cotter to one. Martin took a 2-1 lead and had the hammer going forward. Martin blanked the fourth and had an opportunity to take control of the game in the fifth. Martin was left with a difficult heavy weight draw to sit three, but the line was just off and he hit the centre guard in play. Halfway through the game, Martin led Morris 3-1 before things started to unravel for the Edmonton team. The week started with eight women’s teams, but now there are only two left. Winnipeg’s Jennifer Jones will try to win a berth to the Olympics in front of a hometown crowd against Sherry Middaugh and her team from Coldwater, Ont. The final game, which both teams have been working towards for four years, will start Saturday night at 6:30 p.m. All draws for the Tim Hortons Roar of the Rings will be televised live on TSN/RDS2, the official broadcasting partner of the Season of Champions. Live scoring and standings are available at: www.curling.ca/scoreboard/ To purchase tickets to the Tim Hortons Roar of the Rings, presented by Monsanto go to: www.curling.ca/2013roaroftherings-en/tickets/ The French version of this story will be available at www.curling.ca/2013roaroftherings-fr/ as soon as possible.