Brendan Bottcher, a curling standout from the University of Alberta, was announced Monday afternoon as Canada’s flag bearer for the opening ceremony of the 2013 Winter Universiade, which gets under way later this week in the alpine region of Trentino, Italy. 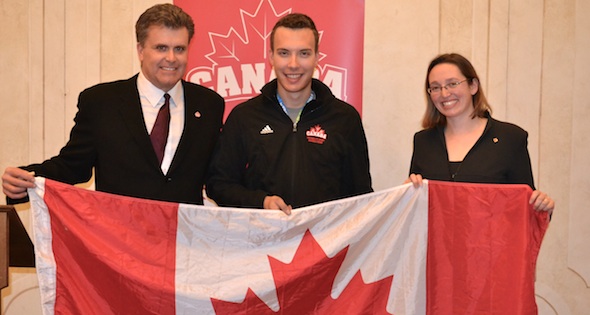 Chef de mission Gord Grace and Mrs. Jessica Blitt, Counsellor, Public Affairs and Advocacy at the Embassy of Canada in Italy, made the announcement and officially welcomed the red and white delegation at a reception held at the Grand Hotel Trento. A number of Italian officials also attended the event, including representatives from the Autonomous Province of Trento and the University of Trento. The opening ceremony of the 26th winter world university games is set for Wednesday evening at Piazza Duomo in the capital of the Northern Italy province and will be streamed live on www.fisu.tv starting at 6 p.m. local (noon EST). Over 2,800 participants from 52 countries, including a record 149 Canadians (107 athletes), are attending the biennial multi-sport competition, which runs until Dec. 21. Bottcher has been considered among the rising stars of Canadian curling ever since he won the 2012 junior world championships in Ostersund, Sweden. The 21-year-old skip from Sherwood Park, Alta., booked his ticket for the FISU Games by leading the U of A Golden Bears to gold at the 2012 CIS/CCA championship alongside Michael Lizmore (third), Brad Thiessen (second), Karrick Martin (lead) and Parker Konschuh (alternate), the foursome he will once again team up with at the Universiade. The Edmonton squad – minus Martin – made a return trip to the CIS-CCA final last march, that time settling for silver. “It’s a pretty big deal for me. You always see the flag bearer as the leader of the team, and this is the first competition I’ve been at where the team is so large,” Bottcher said. “I’ve played at world championships, national championships where your team is quite small and here I’m representing a much larger group. I’m really proud to be doing that for the country at these Games. “It’s definitely going to be a thrill [walking in with the flag]. I’m not sure what to expect out of it but I know I’m going to feel really proud and it’s going to be a cool moment with everyone behind me.” “Brendan is a great representative of our Canadian student-athletes. He is a class act both on and off the ice,” added Grace. “He has represented Canada very well internationally at the world junior championships and has successfully led the U of A Golden Bears to CIS gold as well. He is an academic and athletic all-Canadian and will no doubt carry the flag proudly in Trentino and be a true ambassador at these Games.” While the opening ceremony is set for Wednesday, Canada officially jumps into Universiade action on Tuesday when the women’s and men’s hockey teams open their tournaments. Snowboarding starts on Wednesday, followed by cross country skiing (Thursday), curling (Thursday), alpine skiing (Friday), biathlon (Friday), ski cross (Sunday) and short track speed skating (Dec. 18). Canada does not compete in figure skating, nordic combined and ski jumping. In men’s curling, the Canucks are looking for their first podium finish since winning the inaugural Universiade tourney in 2003 in Tarvisio, Italy. They took fifth place two years ago in Erzurum, Turkey. Jordan Smith, a hockey player from Lakehead University, carried the Canadian flag into the opening ceremony in Erzurum. Team Canada website: https://english.cis-sic.ca/universiade/winter/2013/index Trentino 2013 website: https://www.universiadetrentino.org/ About the Winter Universiade The Winter Universiade is a biennial international multi-sport event open to competitors who are at least 17 and less than 28 years of age as of January 1 in the year of the Games. Participants must be full-time students at a post-secondary institution (university, college, CEGEP) or have graduated from a post-secondary institution in the year preceding the event. The competition program of the Trentino Universiade includes alpine skiing, biathlon, cross-country skiing, curling, figure skating, freestyle skiing, ice hockey (women & men), nordic combined, ski jumping, snowboarding and short track speed skating. About Canadian Interuniversity Sport Canadian Interuniversity Sport is the national governing body of university sport in Canada. Every year, 11,000 student-athletes and 700 coaches from 55 universities and four regional associations vie for 21 national championships in 12 different sports. CIS also provides high performance international opportunities for Canadian student-athletes at Winter and Summer Universiades, as well as numerous world university championships. For further information, visit www.cis-sic.ca or follow us on: Twitter: https://www.twitter.com/CIS_SIC Facebook: https://www.facebook.com/cissports YouTube: https://www.youtube.com/universitysport