The complete 12-team field for the 2014 Scotties Tournament of Hearts, Feb. 1-9 in Montreal’s Maurice-Richard Arena, will be determined through provincial and territorial playdowns over the next two months. But there is one team that already has a trip booked for the Canadian women’s curling championship. 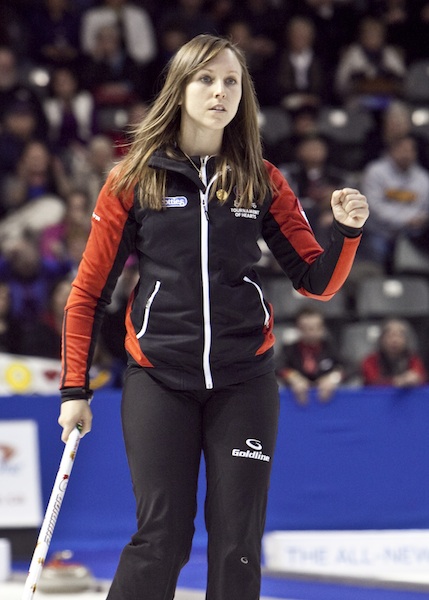 Rachel Homan in action at the 2013 Scotties Tournament of Hearts in Kingston, Ont. (Photo Andrew Klaver)

On the merits of a victory over Manitoba’s Jennifer Jones in the championship final of the 2013 Scotties, Rachel Homan and her Ottawa squad have the honour of competing in Team Canada colours. And with the Canadian capital just a short drive from Montreal, you can be sure they’ll be accompanied by a strong contingent of supporters. Homan and teammates Emma Miskew, Alison Kreviazuk and Lisa Weagle will be shooting for a second consecutive national women’s curling title. The team has represented Ontario at the Scotties two of the past three years. The 24-year-old skip from the Ottawa Curling Club may be leading a young team into the Scotties, but don’t let age fool you because they’ve been curling together longer than most teams on the Canadian competitive circuit. Homan,third Miskew and second Krevaziuk have been teammates for over a dozen years, and Weagle is into her fourth season throwing lead stones. “I think it says a lot about our team’” said Weagle. “ We share the same goals and we’re friends off the ice as well. We spend so much time together, I think that’s really important.” Homan learned her championship ways at an early age, winning the Ontario Bantam Girl’s Curling Championship for competitors under the age of 16 in four consecutive years (2003-2006). She qualified for the Canadian Junior Women’s Curling Championship in 2009, losing to Manitoba’s Kaitlyn Lawes in the final, but returned the following year to dominate the field and clinch the national title with a perfect 13-0 record. At the world championship in Flims, Switzerland, the young Canadians lost to Sweden in the gold-medal game. After winning the 2013 Scotties, the Homan team earned the bronze medal at the 2013 World Women’s Curling Championship. At the 2013 Tim Hortons Roar of the Rings Canadian Curling Trials they finished in third spot, losing to fellow Ontarian Sherry Middaugh in the semifinal match. Regular updates featuring results from playdowns across the country will be featured on the Scotties website in the upcoming weeks. “You Gotta Be There” to see the best women’s teams in the country compete in Montreal’s first Scotties Tournament of Hearts. Reserve your seats in the Maurice-Richard Arena today by clicking here.