With two wins on Monday, Canada’s Laura Crocker is getting closer to notching a spot in the tie-breakers at the 2013 Winter Universiade in Trentino, Italy. Crocker and her Wilfrid Laurier University team of third Sarah Wilkes, second Jennifer Gates, lead Cheryl Kreviazuk, alternate Breanne Meakin and coach Garry Coderre, stole two points in the ninth end and ran their opponents out of rocks for the 5-3 win over the USA’s Cory Christensen at the Baselga di Pine Ice Stadium. In the evening game against Japan’s Yoshimura Sayaka, the Canadians led 5-1 after five ends, and controlled the game, stealing one in the ninth for a 7-2 victory. Crocker now sits at 4-4 in the standings and will play the final game of the round robin on Tuesday afternoon against Korea (5-3). A win for Canada and loss by Sweden (5-3) would put Crocker into tie-breakers on Wednesday. Russia’s Anna Sidorova (8-0) has already qualified for playoffs, with Great Britain and Switzerland right behind with identical records of 6-2. Korea, Sweden and Canada will be fighting for the final playoff position, while Japan, USA, China and Italy are out of contention. 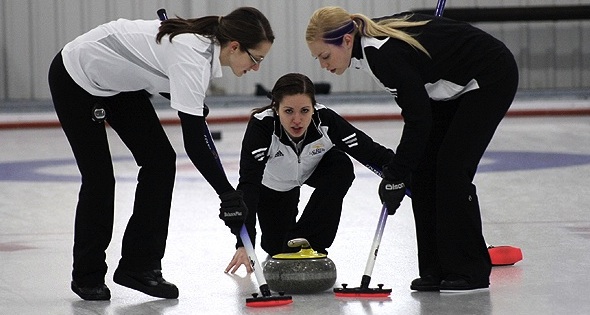 On the men’s side, it was a tough day for the University of Alberta’s Brendan Bottcher and his team of Michael Lizmore (third), Brad Thiessen (second), Karrick Martin (lead) and Parker Konschuh (alternate), with coach Rob Krepps, who had their undefeated streaked snapped by the USA’s Chris Plys, losing 10-3 in their one game of the day. Plys scored his deuce in the first end, then stole two more points in the second. The Canadians came back with a deuce, but they gave up a huge six points in the fifth end, leaving Bottcher trailing 10-2. After scoring a single in the sixth, Team Canada conceded, taking the 10-3 loss and seeing their winning streak end at six. With a 6-1 record, Canada drops into second place in the standings behind Sweden’s Oskar Eriksson, who has already qualified for the playoffs. The Team Canada men will play the two final round robin games on Tuesday, meeting Switzerland’s Mario Freiberger (3-4) and finishing off with Sweden (7-0) in a meeting of the two teams that sat at the top of the standings throughout the competition. Follow Team Canada on the Canadian Interuniversity Sport websites (English and French) here: https://english.cis-sic.ca/universiade/winter/2013/index https://francais.cis-sic.ca/landing/index Access the 2013 Winter Universiade/Trentino 2013 website here: https://www.universiadetrentino.org/ About the Winter Universiade The Winter Universiade is a biennial international multi-sport event open to competitors who are at least 17 and less than 28 years of age as of January 1 in the year of the Games. Participants must be full-time students at a post-secondary institution (university, college, CEGEP) or have graduated from a post-secondary institution in the year preceding the event. The competition program of the Trentino Universiade includes alpine skiing, biathlon, cross-country skiing, curling, figure skating, freestyle skiing, ice hockey (women & men), nordic combined, ski jumping, snowboarding and short track speed skating. About Canadian Interuniversity Sport Canadian Interuniversity Sport is the national governing body of university sport in Canada. Every year, 11,000 student-athletes and 700 coaches from 55 universities and four regional associations vie for 21 national championships in 12 different sports. CIS also provides high performance international opportunities for Canadian student-athletes at Winter and Summer Universiades, as well as numerous world university championships. For further information, visit www.cis-sic.ca or follow us on: Twitter: https://www.twitter.com/CIS_SIC Facebook: https://www.facebook.com/cissports YouTube: https://www.youtube.com/universitysport