We are extremely excited to announce that the Rocks & Rings program has now reached over 500,000 kids across Canada! Here’s a brief insight into how it all began. 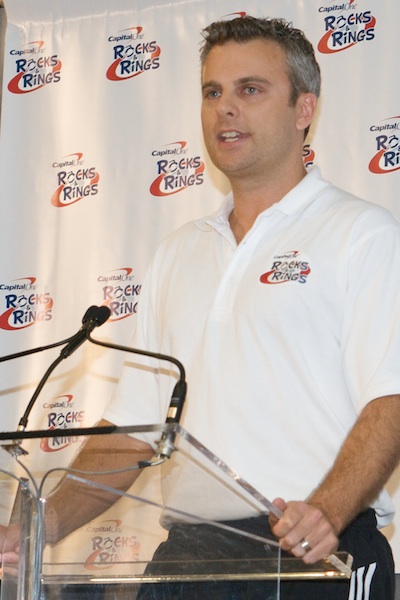 It was 8:45 a.m., Thursday, January 22, 2009, Toronto. The kids at Three Valleys School were about to be the first to receive the Rocks & Rings program and had no idea how much fun they were about to have – nor did we. The entire concept had started only months earlier with a pitch to Capital One, who understood the need to get more kids excited about curling as well as being physically active. The Canadian Curling Association was on board and the trifecta was complete. After the Three Valleys visit we were ready to share our news with the world by officially kicking off the program a couple of weeks later at Thorncliffe School, the largest elementary school in North America. Greg Stremlaw, CEO of the CCA, flew in from Ottawa, and Ian Cunningham spoke on behalf of Capital One. Then Education Minister, now Premier of Ontario, Kathleen Wynne joined us as well. I like to think her performance with our modified stones that day helped propel her to the top of Ontario politics. Along with other media, TSN was there getting footage, and lots of it. Unknown to most, and thanks to the kindness and support of TSN curling producer Scott Higgins, that footage became our first Rocks & Rings commercial. All those who quickly tired of hearing my voice preaching the benefits of the program during Season of Champions and Grand Slam broadcasts have Scott to thank! Two seasons later, and much to the curling fan’s delight, we had a new commercial shot by our friends at Switchframe Media (the guys behind Johnny “the Hammer” Chow) featuring Kaitlyn Lawes. Sorry I should say OLYMPIAN Kaitlyn Lawes. (Are you also noticing a theme of success for those that have worked with the program?). Those commercials, along with both Capital One’s and the CCA’s instant desire to see this program grow, allowed it to explode. Only a few short months after the Toronto launch we would add Vancouver, Regina, Winnipeg, Ottawa and Halifax to the mix for the 2009-10 school year. In that first full year of Rocks & Rings we reached 60,000 kids! Since then we’ve expanded into every single province, and have even made multiple trips to Nunavut. We’ve added new programming for repeat schools, developed adapted programming for disability-focused schools, modified tournaments for high schools, and even visited birthday parties! Girl Guides, Boy Scouts, Boys & Girls Clubs of Canada, Special Olympics – you name it, chances are over the past 5 years we’ve worked with them. We’ve managed to get featured on CBC’s The National, as well as in The Globe and Mail and hundreds of other media outlets across the country. We’re quickly approaching the five-year anniversary of that first visit, and it’s been a whirlwind ride to say the least. We’re now on target to reach 200,000 kids per year so that one million mark press release is hopefully going to come even quicker than this one.