A total of 680 curlers from the Greater Montreal area participated in the 2013 edition of the Grand Match and Grande Dame held on Saturday November 16, 2013. 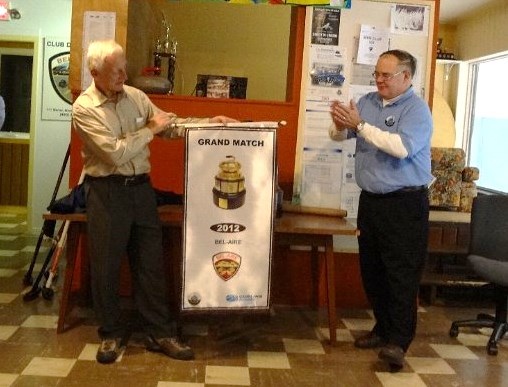 The Grand Match banner being presented to Michel Nadeau, President of Bel-Aire CC – the winning Grand Match club in 2012 – a scene that will be likely be repeated with this year’s President since the Club won again. To the right: François Vary, Grand Match / Grande Dame co-ordinator.(Photo courtesy François Vary)

A total of 122 men’s teams (488 players) from 16 Greater Montreal curling clubs played in Grand Match 2013. Men from Bel-Aire CC (in Mont St. Hilaire) finished in first place with the highest percentage for games won (61.5 %). It is the second year in a row that Bel-Aire wins the Grand Match. In the women’s category, 48 teams (192 players) representing 14 clubs competed in the Grande Dame. Women from Hudson Legion won the event (80.4%). It is an annual tradition where men’s and women’s teams from around Montreal meet on the same day to play 10-end games. “It is one of the most important curling competiton in terms of participation.” says François Vary, coordinator for the event. The competition’s goal is to fraternize and to officially launch the winter season (after five ends, players stack their brooms and take a short break to warm up). These matches are inspired from a Scottish tradition when, in times past, curlers would gather to play the game simultaneously at a Grand Match as soon as the first rivers and ponds would freeze. For many years now, the Grand Match and the Grande Dame are organized by the regional curling association (ARCM or Association régionale de curling de Montréal). Originally the Grand Match was held by the Canadian Branch of the venerable Royal Caledonian Curling Club. To be eligible to the Grand Match ranking, each club must register a minimum of two teams per sheet of the club (to a maximum of four sheets). For the Grande Dame each club must register a minimum of two teams per club. When a club has registered more teams than the required minimum, a bonus point per extra team is added to the total points won. 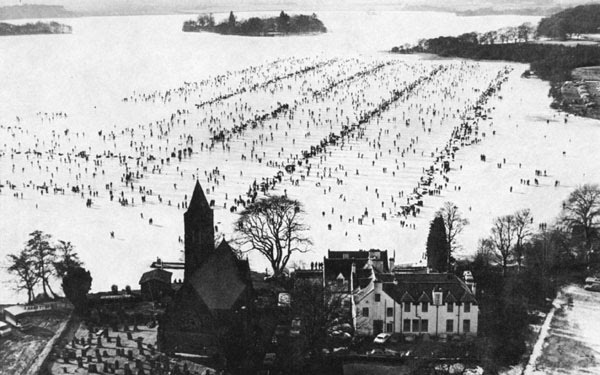