Over the New Year’s break, Northern Ontario’s Tracy Horgan and her team from Sudbury, Ont., travelled to Yichun, China, to compete in the 2013 Yichun International Ladies Curling Competition. This was the third year for the event, won in 2012 by Canada’s Sherry Middaugh of Coldwater, Ont., and her team of Joanna Rizzo, Lee Merklinger and Leigh Armstrong. The previous year in the inaugural competition, Calgary’s Shannon Kleibrink finished out of the playoffs in an event that attracts a roster of strong international women’s teams. Coach Andrea Ronnebeck accompanied Horgan, Jenn Horgan, Jenna Enge and Amanda Gates to China and reported back on an outstanding curling experience – and result. 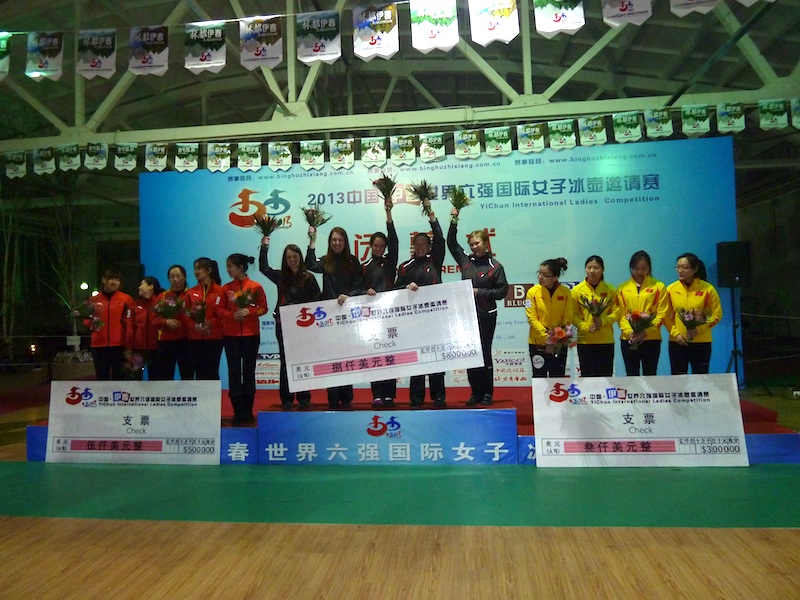 Team Horgan stands at the top of the podium at the 2013 Yichun International Women’s Curling Competition in January (Photo A. Ronnebeck)

Ronnebeck wrote on January 10, 2014: It’s hard to believe that eight days ago we were just finishing up this competition and getting ready to come home. We finished the eight-team round robin with a record of seven wins and one loss. Our one and only loss was our first game against Switzerland A, (Silvana) Tirinzoni. Teams in the competition included Sweden, Denmark, two from Switzerland, a young and talented team from Yichun, the Chinese junior women’s team, and of course China’s Olympic women’s team, Bing Yu Wang. At the end of the round robin, Tirinzoni was in first place and Team Horgan was second. Wang was in third and the junior team (Jiang) in fourth. Tirinzoni lost to Jiang in the 1 vs. 4 semifinal and we beat Wang in the 2 vs. 3 game. It was on to the finals, where we played Jiang and the junior team. We ended up leading by three coming home with last rock after a hard-fought battle. Wang defeated Tirinzoni in the bronze medal game. What an amazing experience! The organizing committee, the Chinese Curling Association, the Yichun club members and everyone involved did an amazing job of hosting us. The hotel and meals were five-star. The ice and rocks were among the best we have ever experienced, thanks to Tim Yeo and his crew. This is the kind of adventure that provides teams with extremely valuable international experience, and Team Horgan is grateful to have been invited to attend.