Team World off to quick start at 2014 WFG Continental Cup

LAS VEGAS — Team World swept to victories in two of the opening three games at the 2014 World Financial Group Continental Cup on Thursday morning at the Orleans Arena. 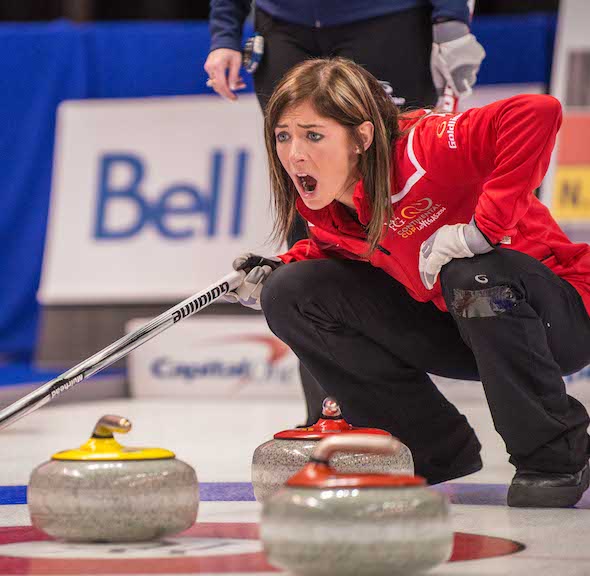 The World squad, captained by David Hay and coached by Peja Lindholm, got wins from reigning world champion Eve Muirhead of Scotland and Thomas Ulsrud of Norway in the traditional team games against Team North America in curling’s version of the Ryder Cup. Muirhead’s team got off to a fast start against Team North America’s Jennifer Jones (Winnipeg) in a battle of teams bound for the 2014 Winter Olympics in Sochi. Muirhead stole three in the fourth end and two more in fifth en route to a 12-2 triumph to earn the full point in the team standings. A total of 60 points are available through the four days of competition, with the first team reaching 30.5 points earning the WFG Continental Cup. “It was a great start, we played really well and the ice conditions are fantastic,” said Muirhead. “We had a really solid game out there and to get the first points on the board for Team World was good.” The teams will meet again — possibly this week, and certainly in Sochi. “You forget that Sochi is only a couple of weeks away and Jennifer’s going to be there but it doesn’t really cross your mind,” said Muirhead. “We play Jennifer a lot during the season and every game is just as tough. It makes it no different to any other game if we play her here or at the Winter Olympics or at any (World Curling) Tour event.” Ulsrud, meanwhile, picked up a three in the fourth end and cruised home with a 7-4 triumph over Team North America’s Jeff Stoughton (Winnipeg) to add another point to the Team World account. Stoughton’s team could manage just single points against Ulsrud, who’ll be representing Norway at the Winter Olympics. “I think we played pretty solid out there,” said Ulsrud, the silver-medallist at the 2010 Winter Olympics in Vancouver. “We’ve been practising pretty hard in preparation for the Olympics; it’s good to get a good start for Team World. This is a big event for us. We get to play the Canadian Olympic (Brad Jacobs) team and the U.S. Olympic team (John Shuster), so we’re looking forward to that, it will be good practice. Hopefully we can send a message to them; I just hope they don’t crush us!” 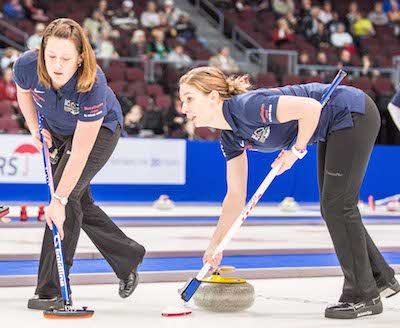 The U.S. Olympic women’s team managed to stop the bleeding for Team North America in the final game on the ice. Erika Brown (Oakville, Ont./Madison, Wisc.) made a clutch draw to backing in the four-foot with her final delivery of the game to earn 5-3 victory over Team World’s Satsuki Fujisawa. “It was a great big win. It’s fun to play in front of 4-5,000 people and to play well,” Brown said, noting that she was aware of the fates of the other two North American teams on the ice. “I think that’s the nature of this event. You’re keeping an eye on everyone and looking around and want to win for your team. I could sense that things weren’t going so well on the other sheets so I’m happy we got a point today [for North America] With that result, Team World takes a 2-1 lead in the overall standings into the next draw — a round of mixed doubles beginning at 1 p.m. (all times Pacific). For the six mixed doubles and six singles matches, one point will be awarded for each victory, one-half point if tied. There will be 18 team games (nine men’s and nine women’s) played, each worth one point for a win and a half-point for a tie. All games are eight ends and there are no extra ends.  There will also be six skins games (those matchups will be decided on Saturday), with each game worth a total of five points to the winner. For ticket and other event information, visit www.curling.ca/2014continentalcup-en/ For the complete schedule, go to: www.curling.ca/2014continentalcup-en/draw-schedule/ TSN (RDS2 in French), the exclusive television network for the CCA’s Season of Champions, will provide complete coverage of the WFG Continental Cup. This story will be posted in French as soon as possible at www.curling.ca/2014continentalcup-fr/