LAS VEGAS — Team World has taken over the lead in the overall standings at the 2014 World Financial Group at the Orleans Arena in Las Vegas. 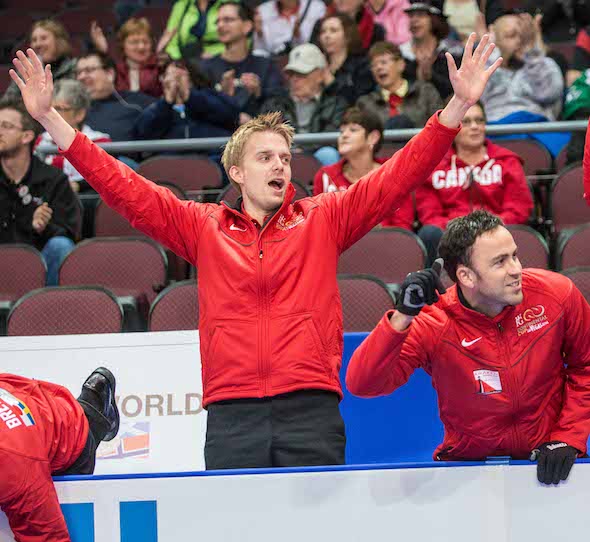 And the World squad can thank a brilliant performance in the Friday afternoon singles competition in curling’s version of the Ryder Cup. Team World won five of the six games, and earned five of the six available points as a result. That erased Team North America’s lead, and left Team World on top with a 9.5-8.5 advantage. The first team to win 30.5 of the 60 available points will win the WFG Continental Cup. The Team World women set the tone, sweeping their three games against Team North America. Each team has to throw six shots — draw the button, hit and roll to button, draw the button through a port, raise to the button, runback takeout and double takeout — with each shot scored one through five depending on its success. In the women’s game, Team World’s Margaretha Sigfridsson (Sweden) beat Team North America’s Rachel Homan (Ottawa) 24-18; Team World’s Eve Muirhead (Scotland) beat Team North America’s Jennifer Jones (Winnipeg) 19-12; and Team World’s Satsuki Fujisawa (Japan) turned back Team North America’s Erika Brown (Oakville, Ont./Madison, Wisc.) 19-13. “It’s six quite easy points there, so it’s important to do the singles well, and it turned out well for us,” said Sigfridsson, who will represent Sweden at the Winter Olympics in Sochi. “We almost never practise those shots, except the draw. But they’re good shots, quite difficult, so it’s fun to have that kind of competition.” 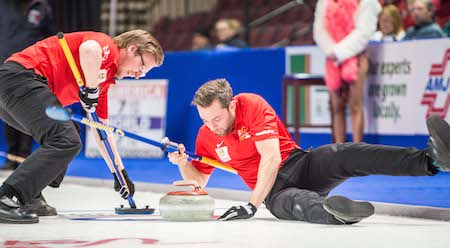 In the men’s singles games, Team World’s David Murdoch (Scotland) was a 16-13 winner over Team North America’s John Shuster (Duluth, Minn.) and Team World’s Thomas Ulsrud (Norway) doubled Team North America’s Jeff Stoughton (Winnipeg). Team North America’s Brad Jacobs (Sault Ste. Marie, Ont.) prevented the clean sweep with a 13-11 win over Team World’s Niklas Edin (Sweden). “Definitely a tough afternoon, but we were able to get out of there and we’re only down one point,” said Team Jacobs vice-skip Ryan Fry. “Hopefully in tonight’s team games we can get some momentum back going our way. It’s a hard format, to be honest with you. You miss one shot and they make it, you’re down five points going into the next shot. It’s a momentum thing; it can swing one way or the other. Get us into the team games and hopefully we’ll rise to the top.” It was a splendid comeback for Team World, which lost all three traditional team games on Thursday night. “That’s what we said last night; you get good days and bad days at this event, and it doesn’t take much at times,” said Murdoch. “It swings pretty rapidly, and you just saw a huge swing again. We’re back in it, and one (point) ahead, which is nice. There is one more draw on Friday, a traditional team draw at 7 p.m. (all times Pacific). On Saturday, the final mixed doubles draw goes at 9 a.m., followed by the final two traditional team games, at 1:30 p.m. and 6:30 p.m. For the six mixed doubles and six singles matches, one point will be awarded for each victory, one-half point if tied. There will be 18 team games (nine men’s and nine women’s) played, each worth one point for a win and a half-point for a tie. All games are eight ends and there are no extra ends.  There will also be six skins games (those matchups will be decided on Saturday), with each game worth a total of five points to the winner. For ticket and other event information, visit www.curling.ca/2014continentalcup-en/ For the complete schedule, go to: www.curling.ca/2014continentalcup-en/draw-schedule/ For live scoring and up-to-date standings, go to: www.curling.ca/2014continentalcup-en/results/ TSN (RDS2 in French), the exclusive television network for the CCA’s Season of Champions, will provide complete coverage of the WFG Continental Cup.