LAS VEGAS — A huge double takeout from Sochi-bound Brad Jacobs played a huge role in giving Team North America the lead after the opening day of the 2014 World Financial Group Continental Cup on Thursday at the Orleans Arena. 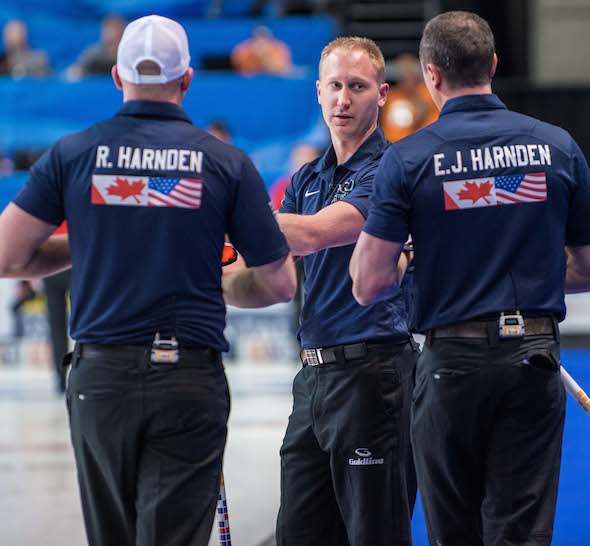 Jacobs made a double takeout to blank the seventh end in his traditional team-play showdown against Team World’s Niklas Edin on Thursday night. And in the eighth, Jacobs, of Sault Ste. Marie, Ont., made an open hit to score one for a 4-3 victory in a rematch of last year’s Ford World Men’s Championship gold-medal game in Victoria, which was won by Edin. That result, combined with two other Team North America victories on Thursday evening, was part of a clean sweep of Thursday night’s games, giving Team North America a 6-3 lead on Team World in the overall standings heading into Day 2. “That feels great,” said Jacobs, who will skip Team Canada at the Winter Olympics in Sochi. “That was my first game ever, all of our (his teammates) first games, at the Continental Cup and that was a blast. I can’t believe how many fans were out there. It was awesome — a clean sweep, we’re up 6-3. Perfect.” A total of 60 points are available in curling’s version of the Ryder Cup; the first team to reach 30.5 points will win the event. “That was a no-risk shot,” said Jacobs of the blank attempt in the seventh end. “If we hit one of the back ones and give up a steal, it’s not the worst, coming up with hammer. It was a no-fear shot; I threw it real aggressive and it worked out perfect.” In other action, Team North America’s Rachel Homan (Ottawa) was a 6-4 winner over Team World’s Margaretha Sigfridsson. Homan’s team stole a deuce in the sixth end to turn the game around when Sigfridsson’s last-rock thrower, Maria Prytz, couldn’t execute a hit-and-roll to score. “Just barely,” said a laughing Homan about the victory. “But that was good. My whole team played well and so did Sigfridsson’s. Pretty excited about the three-team sweep tonight.” 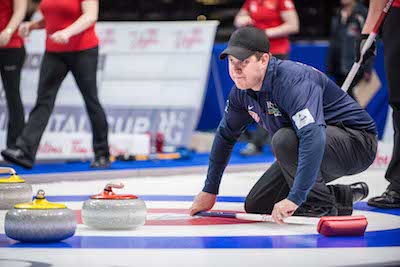 In the other evening game, Team North America’s John Shuster (Duluth, Minn.) hung on for a 5-3 win over Team World’s David Murdoch. Shuster, who will skip the United States in Sochi, scored two in the fourth end and never looked back. “Any time you can go out there and get a win it feels great,” said Shuster. “It’s amazing how different it feels when you’re winning for a whole team of 24 instead of just for a team of four.” There are three draws on Friday: traditional team games at 8:30 a.m. and 7 p.m., sandwiched around the singles competition at 1 p.m. For the six mixed doubles and six singles matches, one point will be awarded for each victory, one-half point if tied. There will be 18 team games (nine men’s and nine women’s) played, each worth one point for a win and a half-point for a tie. All games are eight ends and there are no extra ends.  There will also be six skins games (those matchups will be decided on Saturday), with each game worth a total of five points to the winner. For ticket and other event information, visit www.curling.ca/2014continentalcup-en/ For the complete schedule, go to: www.curling.ca/2014continentalcup-en/draw-schedule/ For live scoring and up-to-date standings, go to: www.curling.ca/2014continentalcup-en/results/ TSN (RDS2 in French), the exclusive television network for the CCA’s Season of Champions, will provide complete coverage of the WFG Continental Cup.