LAS VEGAS — Team World is still in the race at the 2014 World Financial Group Continental Cup at the Orleans Arena. 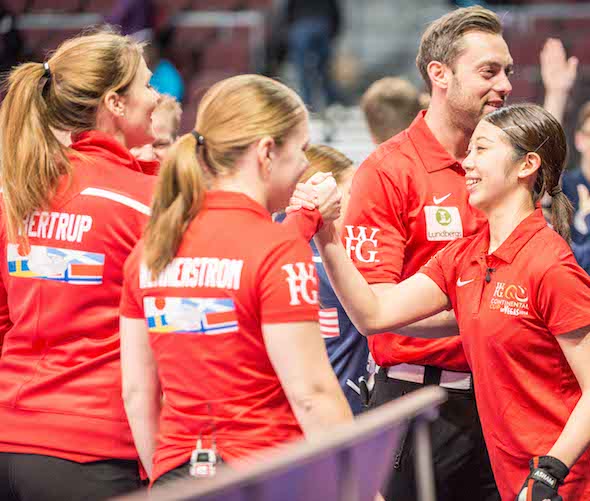 Taking on Team North America in curling’s version of the Ryder Cup, Team World earned a split of the three points up for grab on Friday morning during traditional team games. The result left Team North America with a 7.5-4.5 lead in the most unique event in curling, featuring teams battling in traditional team play, mixed doubles, singles and skins formats. A total of 60 points are up for grabs, and the first team to reach 30.5 will win the WFG Continental Cup. The half-point came out of nowhere on Friday morning. Team North America’s Rachel Homan (Ottawa) had a two-point lead and the hammer in the eighth and final end, but flashed on her last-rock hit attempt to give Team World’s Satsuki Fujisawa (Japan) a stolen deuce to tie the game 5-5. With no extra ends in the WFG Continental Cup, each team was awarded half a point in the overall standings. 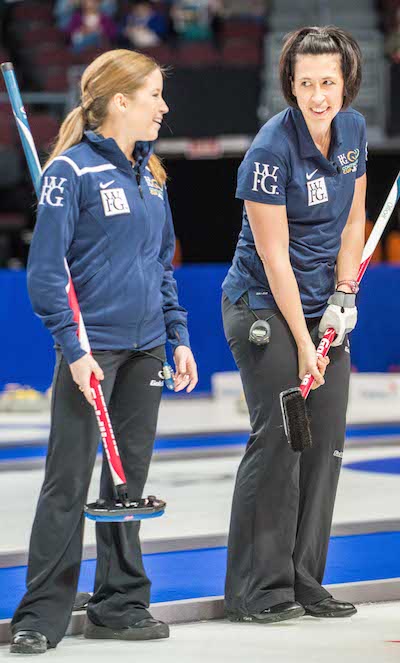 “It was very, very exciting (to get a tie in that game),” said Fujisawa through an interpreter. “Halfway through when we lost those two points (through a Homan steal in the fifth end), we thought we were going to lose, but we got that one point and then at the end we thought we were going to lose in the eighth end but we managed to get the two points back and get the tie which was exciting.” World champ Niklas Edin of Sweden, meanwhile, posted a full point for Team World thanks to a 7-3 win over Team North America’s John Shuster (Duluth, Minn.). Edin’s team scored three in the third end and two more in the fifth and never looked back. “We needed a good win here and we needed to get some points on the board as well,” said Edin. “We were lucky in that last game (Team Fujisawa) to tie it up. It’s looking better and better, we’re starting to get a feel for the ice and some points on the board, so I think it should be interesting the next few matchups.” In the other Friday morning tilt, Team North America’s Jennifer Jones (Winnipeg) bounced back impressively from an opening-day loss to Team World’s Eve Muirhead. Jones stole two in the first end and three more in each of the third and fourth ends for a 9-3 win over Team World’s Margaretha Sigfridsson (Sweden). “We certainly felt a lot better out there today,” said Team Jones second Jill Officer. “We were a lot more confident with the ice and with ourselves too which made a big difference. We’re happy to put some points on the board for Team North America as well. It’s nice to be able to bounce back like that because yesterday certainly wasn’t pretty and definitely wasn’t our normal team (performance). So it was nice to come back out quite a bit sharper today.” There are two more draws on Friday: the singles competition at 1 p.m. (all times Pacific) and another traditional team draw at 7 p.m. For the six mixed doubles and six singles matches, one point will be awarded for each victory, one-half point if tied. There will be 18 team games (nine men’s and nine women’s) played, each worth one point for a win and a half-point for a tie. All games are eight ends and there are no extra ends.  There will also be six skins games (those matchups will be decided on Saturday), with each game worth a total of five points to the winner. For ticket and other event information, visit www.curling.ca/2014continentalcup-en/ For the complete schedule, go to: www.curling.ca/2014continentalcup-en/draw-schedule/ For live scoring and up-to-date standings, go to: www.curling.ca/2014continentalcup-en/results/ TSN (RDS2 in French), the exclusive television network for the CCA’s Season of Champions, will provide complete coverage of the WFG Continental Cup.