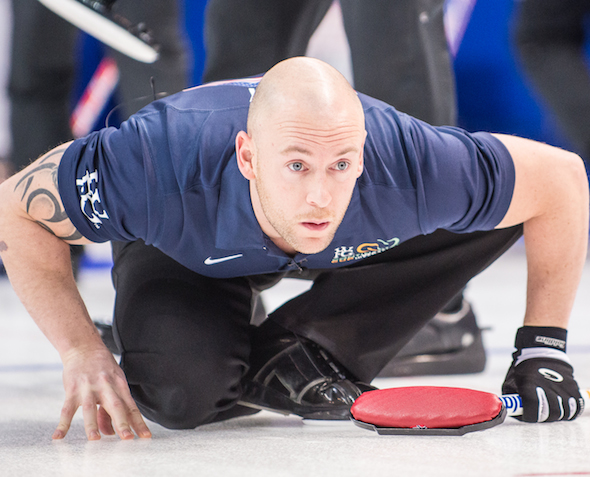 Team North America, which suffered five defeats in the six singles contests on Friday afternoon, bounced back with two victories in team play on Friday night, and earned a tie in the other game, as all three games were decided on skips’ rocks in the eighth and final end. By claiming 2.5 of the three available points, Team North America takes an 11-10 lead into play Saturday in curling’s version of the Ryder Cup. A total of 60 points are available, meaning the first team to 30.5 points will win the WFG Continental Cup. Team North America skip Jeff Stoughton (Winnipeg) made the shot of the evening, bringing the crowd of nearly 5,000 to its feet with a stunning in-off through a narrow port to score one in the sixth end against Team World’s David Murdoch (Scotland). Stoughton carried the momentum into the eighth end, scoring a game-winning deuce for a 5-4 triumph. “That’s exactly what an old fart needs at this point – I was nervous, I was excited, the crowd was fantastic, there was some big shots,” said Team Stoughton vice-skip Jon Mead. “(Stoughton’s shot) was huge. We had a good end going and had a couple just miss by nothing and to be in such a bad situation – it was a tough in-off without having to go off two rocks just to get there and he made a beauty and the place went nuts and it was a three-point swing, which was huge.” “We got outplayed (in singles) and we tip our hats to the World team,” added Mead. “They played really well again tonight and we scrapped out two and a half points – the two men’s teams got two points and we were never winning until it was over so it was a good night for us.” In other men’s action, Team North America’s Brad Jacobs (Sault Ste. Marie, Ont.) also scored two in the eighth end to pull out a 4-3 win over Team World’s Thomas Ulsrud (Norway). A beautiful freeze by Jacobs’ vice-skip Ryan Fry set the table, and Jacobs didn’t need to throw his final rock. “It was incredible tonight – there was a couple of loud cheers, especially when Stoughton made that shot; we look over and we had to stop our game – it was like being at the Brier or the Trials or something,” said Jacobs. “It was a really cool atmosphere and everyone played pretty good tonight. I know on our sheet it was really tight, which was awesome. “Team North America was really resilient tonight because we had a rough afternoon. But we came out and we bounced back really well. It was nice to see the girls (Team Brown) split that game – that was huge, and it was good to see our team an Stoughton’s team win as well.” In women’s play, a big steal of one in the sixth end by Team North America’s Erika Brown (Oakville, Ont./Madison, Wisc.) made the difference in a 3-3 tie with Team World’s Eve Muirhead (Scotland). Muirhead had a shot at two for the win, but couldn’t make the angle raise and settled for the game-tying single. 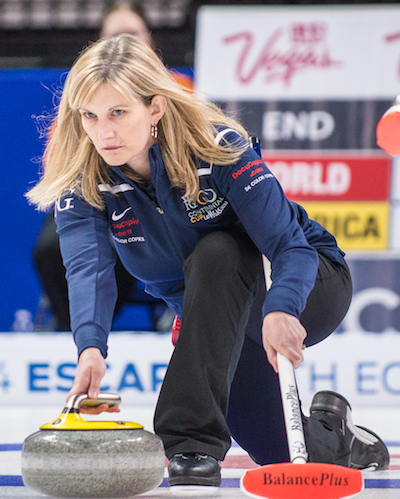 “It was so intense when the crowd was so loud doing the wave… I just took it all in,” said Team Brown vice-skip Debbie McCormick. “Oh my gosh, this is so fun to play in an atmosphere like this. I wanted to enjoy the moment. It was so much fun and there was so much energy.” On Saturday, the final mixed doubles draw goes at 9 a.m., followed by the final two traditional team games, at 1:30 p.m. and 6:30 p.m. For the six mixed doubles and six singles matches, one point will be awarded for each victory, one-half point if tied. There will be 18 team games (nine men’s and nine women’s) played, each worth one point for a win and a half-point for a tie. All games are eight ends and there are no extra ends.  There will also be six skins games (those matchups will be decided on Saturday), with each game worth a total of five points to the winner. For ticket and other event information, visit www.curling.ca/2014continentalcup-en/ For the complete schedule, go to: www.curling.ca/2014continentalcup-en/draw-schedule/ For live scoring and up-to-date standings, go to: www.curling.ca/2014continentalcup-en/results/ TSN (RDS2 in French), the exclusive television network for the CCA’s Season of Champions, will provide complete coverage of the WFG Continental Cup.