LAS VEGAS — It’s going to come down to the final round of skins games to decide the winner at the 2014 World Financial Group Continental Cup at the Orleans Arena. 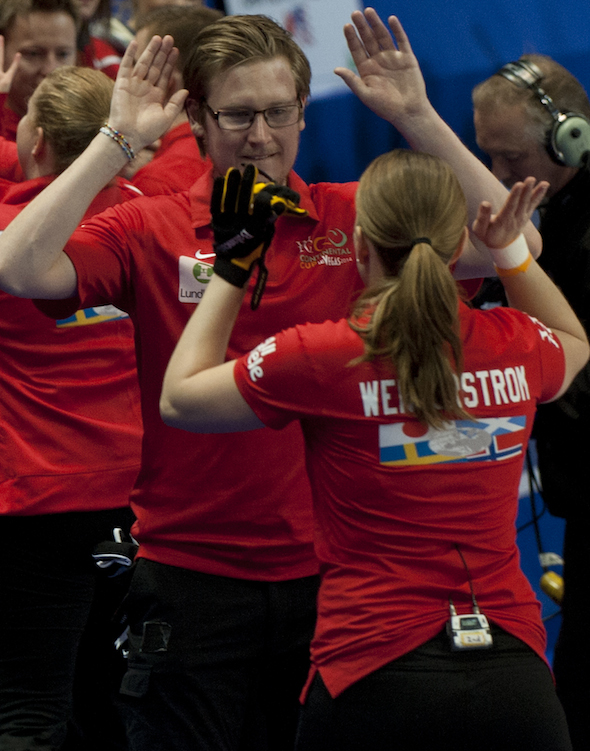 Team World was down by five points heading into Sunday afternoon’s first round of skins competition, but thanks to some late comebacks managed to cut into that Team North America lead by two points. As a result, Team North America takes a 24-21 lead into the final draw of competition, beginning at 6 p.m. (all times Pacific). A total of 15 points will be on the line in the final three skins games, and the first team to reach 30.5 points will win the WFG Continental Cup, although as defending champion, Team North America would need only 30 points to retain possession and become the first side in the 10-year history of the event to win back-to-back titles. Speaking of history, more of it was made on Sunday afternoon. The crowd of 4,802  broke the event total attendance record, set in 2004 in Medicine Hat 42,317. Going into the late draw, the 2014 total stands at 46,392. Team World’s Margaretha Sigfridsson (Sweden) was the big winner on Sunday afternoon, earning a 3.5-1.5 win against Team North America’s Jennifer Jones (Winnipeg) — the skins in the first six ends are worth half a point each, while the final two ends are worth a point each. 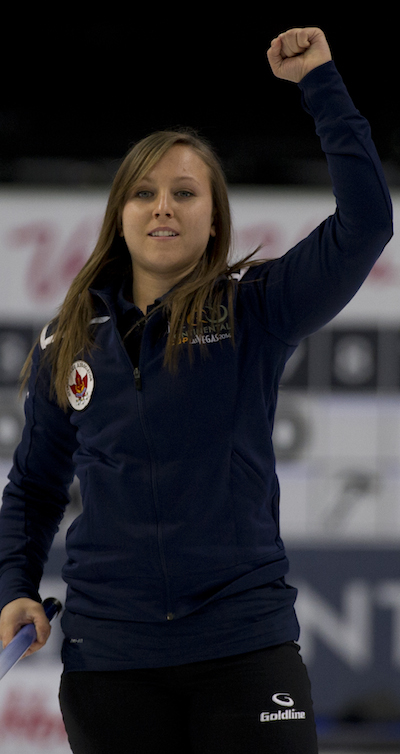 Jones had a shot at the last-end skin to tie the game but missed on a runback takeout. “It feels fantastic that we have a good shot at the last draw tonight,” said Sigfridsson. “It turned out well in all the games (this afternoon). It’s a lot of fun (in skins competition) – each end is like a new game, so it’s like eight games within one so every end is really exciting. It will be fun to watch the games tonight, we will enjoy it for sure.” Team World got a clutch draw from Niklas Edin (Sweden) to earn a 2.5-2.5 tie with Team North America’s John Shuster (Duluth, Minn.). The eighth-end skin was carried over, meaning the skips needed to draw the button to decide the last available point, and Edin outdrew Shuster. “In that situation I just tried to figure out how much it slowed down during the game,” said Edin of his last draw. “I had to play a lot of take-outs earlier on so I was just trying to figure out what speed it was. It’s hopefully going to come down to the last few rocks (in the evening skins games). We’re really glad we could win this because it looked really bad with three ends to go. Hopefully the crowd will be able to see some good curling tonight.” In the other game, Rachel Homan (Ottawa) skipped the Team North America mixed lineup (third Jon Mead, second Alison Kreviazuk, lead Reid Carruthers) to a 3-2 win over Team World’s Tom Brewster (Scotland), who was backed up by Emi Shimizu, Greg Drummond and Chiaki Matsumura. “It’s all on the line tonight – hopefully we can pull through,” said Homan. “I thought we would get some points out there but one or two shots didn’t come off. We played our game, that’s all you can do. We’re going to cheer the rest of the team on as loud as we can. Hopefully we can make as many shots as we can tonight and get many points.” The final round of skins games features Team World’s Eve Muirhead (Scotland) against Team North America’s Erika Brown (Oakville, Ont./Madison, Wisc.) in the women’s game; Team North America’s Brad Jacobs (Sault Ste. Marie, Ont.) against Team World’s Thomas Ulsrud (Norway) in the men’s game, while the lineups for the mixed game are: Team North America’s Jeff Stoughton, Emma Miskew, Mark Nichols and Lisa Weagle against Team World’s David Murdoch, Satsuki Fujisawa, Scott Andrews and Miyo Ichikawa. For the six mixed doubles and six singles matches, one point was awarded for each victory, one-half point if tied. There were 18 team games (nine men’s and nine women’s) played, each worth one point for a win and a half-point for a tie. All games are eight ends and there are no extra ends. For ticket and other event information, visit www.curling.ca/2014continentalcup-en/ For the complete schedule, go to: www.curling.ca/2014continentalcup-en/draw-schedule/ For live scoring and up-to-date standings, go to: www.curling.ca/2014continentalcup-en/results/ TSN (RDS2 in French), the exclusive television network for the CCA’s Season of Champions, will provide complete coverage of the WFG Continental Cup.