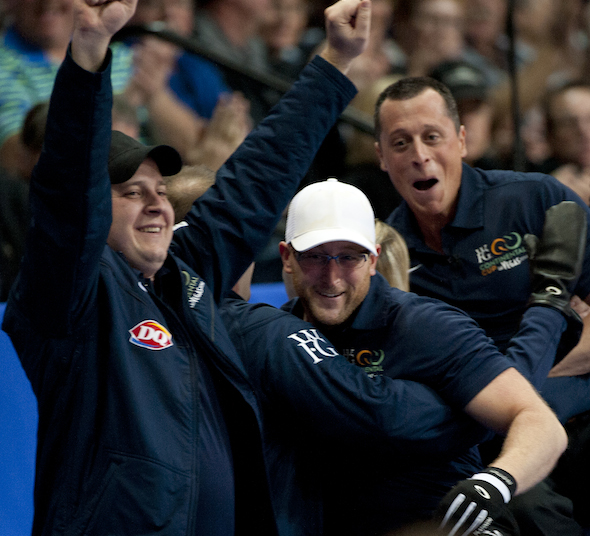 The home team captured the 2014 World Financial Group Continental Cup, finishing off a 35-25 win over Team World in curling’s version of the Ryder Cup. It was a historic night on two counts; the draw attendance of 4,823 pushed the event total to 51,215, shattering the record of 42,317 set in 2004 in Medicine Hat. As well, it was the first time a team has repeated as champion; the winners had alternated in the nine previous editions, giving Team North America a 6-4 edge in the historical standings. Team North America won the winner’s cheque of $52,000 ($2,000 per member, including captain Steve Brown of Madison, Wisc. and coach Rick Lang of Thunder Bay, Ont.), while the World team took home $26,000 ($1,000 per member, including captain David Hay of Scotland and coach Peja Lindholm of Sweden). Team North America also won the $13,000 bonus cheque ($500 per member, including captain and coach) for collecting the most points in the skins games on Sunday. 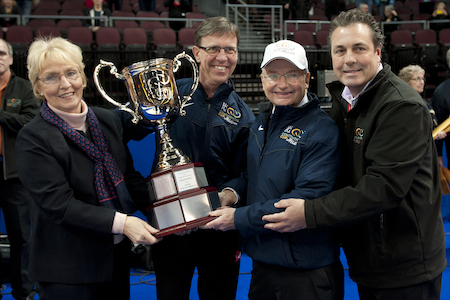 The victory was clinched in the sixth end of the men’s skins game between Team North America’s Brad Jacobs (Sault Ste. Marie, Ont.) and Team World’s Thomas Ulsrud (Norway) when Ulsrud missed his final shot. That game Team North America a half-point to push them to the needed 30-point threshold in the overall standings. Jacobs would end up a 4-1 winner over Ulsrud (each skins game was worth five points) “It felt excellent to go out there and finish this week off as a team,” said Jacobs, whose next assignment — along with eight other teams that competed this week in Las Vegas — will be the 2014 Winter Olympics in Sochi next month. “We had quite a bit of work still to do today, and to go out and play the way we did in all three of those final games was pretty clutch by everybody. It was a great feeling to win this thing. “I know our team was really eager to go out there and show that we can play and bring back the same attitude we had the Trials. We did today. And we can’t wait for Sochi after playing the way we did tonight.” In the mixed skins game, Team North America’s Jeff Stoughton, Emma Miskew, Mark Nichols and Lisa Weagle rolled to a 4-1 win over Team World’s David Murdoch, Satsuki Fujisawa, Scott Andrews and Miyo Ichikawa. In women’s skins, Team North America’s Erika Brown (Oakville, Ont./Madison, Wisc.) — who’ll represent the United States in Sochi — edged Team World’s Eve Muirhead (Scotland) 3-2. Muirhead will skip the Great British women’s team in Sochi. “It was great; it was so great to be on the ice with those guys getting a whole bunch of skins and us muddling through,” said Brown, who also made history as the first four-time winner of the WFG Continental Cup. “That was a good finish. It’s a great boost for Sochi. I knew secretly that it would be four wins for me if we ended up on top so that was pretty awesome.” “It feels amazing,” added Team North America’s Jennifer Jones (Winnipeg), the Canadian women’s skip for the Sochi Games. “We just played outstanding today and it just feels awesome. We’re absolutely excited about Sochi. We got everything and more we wanted to get out of this Continental Cup, and we’re feeling great. We’ve got some confidence, and it’s exactly what we wanted heading into the Olympics.” Next year’s World Financial Group Continental Cup is scheduled for Jan. 8 to 11 at the Markin MacPhail Centre in Calgary. This story will be posted in French as soon as possible at www.curling.ca/2014continentalcup-fr/