LIVERPOOL, N.S. — It’s only Wednesday night, but Manitoba’s Braden Calvert is already in the position every team at the M&M Meat Shops Canadian Junior Men’s and Women’s Championship wants to be in: one well-timed victory away from a national title. 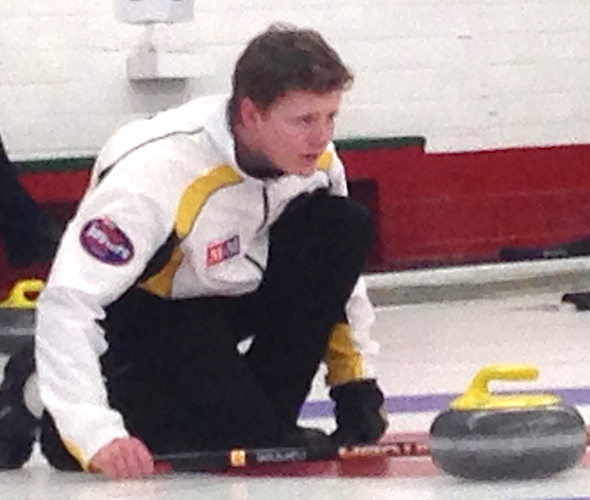 Manitoba skip Braden Calvert and his team from Winnipeg are headed to the men’s final at the 2014 M&M Meat Shops Canadian Juniors in Liverpool, N.S. (Photo, CCA)

Calvert’s team from Winnipeg — third Kyle Kurz, second Lucas Van Den Bosch, lead Brendan Wilson and coach Tom Clasper — clinched first place in the round-robin and a bye to Sunday’s 4 p.m. (all times Atlantic) men’s gold-medal game with a 5-4 win over Alberta’s Carter Lautner (5-3, Calgary) on a wintry night at the Liverpool Curling Club. With the victory, Manitoba improved to 8-0 and holding the necessary tiebreaker advantages to clinch first place and the bye to the final. “That’s a pretty neat feeling,” said Calvert, whose team defeated reigning Canadian junior men’s champ Matt Dunstone in the Manitoba final. “The boys have played so well in front of me; they just made my job so easy all week.” Now, the issue becomes how to deal with nearly four full days of thinking about the final, with two round-robin games to play and a day off on Saturday. “I think our team is great at staying loose and trying to have fun all the time,” said Calvert with a smile. “I think we’ll be OK that way. We brought a PS3 and NHL14, so we’ll be pretty busy at that. We’ll hopefully be able to take our minds off it a little bit.” Dunstone, by the way, has been supporting the team from Winnipeg. “We were sitting in our living room cheering him on last year,” said Calvert of Dunstone’s dramatic win in Fort McMurray, Alta. “It’s pretty neat to see what Matt did, and he’s just a great guy. We’ve been talking to him this week and he’s been very supportive. and we’re taking a lot from what he went through last year.” In other men’s championship pool games, New Brunswick’s Rene Comeau (6-2, Fredericton) turned back Saskatchewan’s Tyler Hartung (5-3, Kronau); B.C.’s Cameron de Jong (4-4, Victoria) shaded Ontario’s Ryan McCrady (5-3, Ottawa) 4-3; and Nova Scotia’s Robert Mayhew (5-3, Windsor) doubled Northern Ontario’s Tanner Horgan (5-3, Sudbury) 10-5. In women’s championship pool play, Alberta’s Kelsey Rocque, of Edmonton, suffered her first loss after seven straight wins, bowing 6-3 to home-province hopeful Mary Fay (6-2, Chester); B.C.’s Kalia Van Osch (6-2, Nanaimo/Delta) doubled Ontario’s Molly Greenwood (5-3, Kitchener-Waterloo) 4-2; and Manitoba’s Meaghan Brezden (5-3, Winnipeg) beat Saskatchewan’s Kristen Streifel (4-4, Saskatoon) 7-6. In seeding pool play, to determine the final rankings and the seedings for the 2015 M&M Meat Shops Canadian Juniors in Corner Brook, N.L., P.E.I.’s Veronica Smith (4-4, Cornwall) as a 16-1 winner of Nunavut’s Sadie Pinksen (0-8, Iqaluit). Action at the 2014 M&M Meat Shops Canadian Juniors continues on Thursday with draws 9:30 a.m., 2 p.m. at 6:30 p.m. (all times Atlantic). Round-robin games are taking place at both Queens Place Emera Centre and the Liverpool Curling Club in the beautiful South Shore region of Nova Scotia. Once the top three teams for each gender have been determined, all playoff games will be played at Queens Place Emera Centre. The women’s final is Saturday while the men’s final is Sunday Both finals will be televised live on TSN/RDS2 at 4 p.m. AST/3 p.m. EST. For the second consecutive year, the competition format involves all 14 Member Associations of the Canadian Curling Association (10 provinces, plus Northern Ontario, Northwest Territories, Nunavut and Yukon). This story will be posted in French as soon as possible at www.curling.ca/2014juniors-fr/ The full scoreboard can be viewed at www.curling.ca/scoreboard The leaderboard can be viewed at www.curling.ca/2014juniors-en/standings