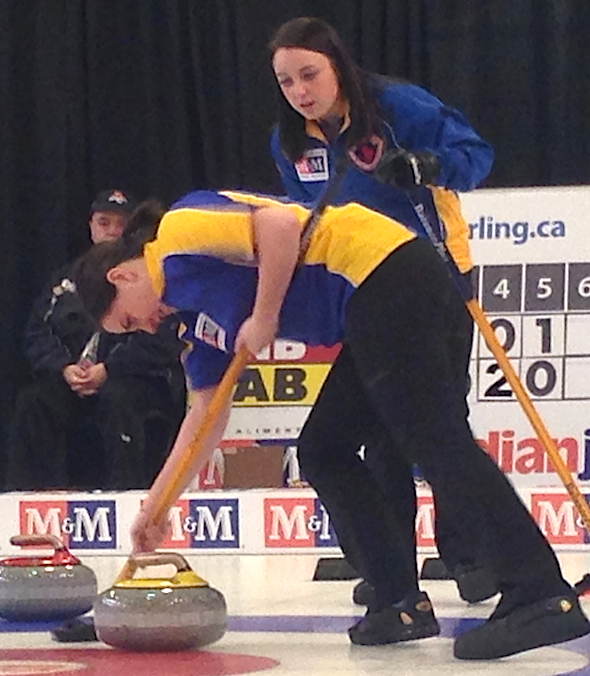 Rocque’s team from Edmonton — third Keely Brown, second Taylor McDonald, lead Claire Tully and coach Amanda-Dawn Coderre — cruised to an 8-4 win over New Brunswick’s Jessica Daigle (4-5, Fredericton) to not only improve its record to 8-1, but also nail down a berth in Saturday’s three-team playoff round. “Of course, it’s always in the back of our minds,” said a satisfied Rocque, who along with Brown and McDonald won a silver medal with the University of Alberta Pandas at last season’s CIS/CCA national university championships in Kamloops, B.C. “We knew that if we won, we should get a playoff spot. But that game, we definitely pushed it aside. We had a rough game last night and we knew we had to come back and play well.” The game she’s referring to was a 6-3 setback Wednesday night to Nova Scotia’s Mary Fay, which ended Alberta’s seven-game win streak. “It’s nationals, we’ve never played any of these teams before, so we know every game is going to be hard,” said Rocque, a third cousin to legendary Alberta player Marcel Rocque. “Nova Scotia curled amazing last night; we weren’t up to their standards at all. I guess in a way it was a blessing to get that loss. We’re happy with where we are right now, but there’s still a lot of work to do.” The top three teams at the end of round-robin play will to to the women’s playoffs on Saturday, with the second- and third-place teams meeting in the semifinal at 9:30 a.m. (all times Atlantic), with the winner advancing to the gold-medal game at 4 p.m. against the first-place team. In other women’s games, B.C.’s Kalia Van Osch (Nanaimo/Delta) took over sole possession of second place with a 7-2 record by beating Manitoba’s Meaghan Brezden (5-4, Winnipeg) 7-4, while Ontario’s Molly Greenwood (6-3, Kitchener-Waterloo) routed Quebec’s Camille Boisvert (3-6, St-Romuald) 9-3. In men’s play, New Brunswick’s Rene Comeau (7-2, Fredericton) clinched at least a tiebreaker berth with a 5-4 win over Northern Ontario’s Tanner Horgan (5-4, Sudbury), while Manitoba’s Braden Calvert (8-1, Winnipeg) suffered his first loss, bowing 8-6 to B.C.’s Cameron de Jong (5-4, Victoria). Manitoba has already clinched a berth in Sunday’s men’s gold-medal game at 4 p.m. Action at the 2014 M&M Meat Shops Canadian Juniors continues Thursday with draws at 2 p.m. and 6:30 p.m. Round-robin games are taking place at both Queens Place Emera Centre and the Liverpool Curling Club in the beautiful South Shore region of Nova Scotia. Once the top three teams for each gender have been determined, all playoff games will be played at Queens Place Emera Centre. The women’s final is Saturday while the men’s final is Sunday Both finals will be televised live on TSN/RDS2 at 4 p.m. AST/3 p.m. EST. For the second consecutive year, the competition format involves all 14 Member Associations of the Canadian Curling Association (10 provinces, plus Northern Ontario, Northwest Territories, Nunavut and Yukon). This story will be posted in French as soon as possible at www.curling.ca/2014juniors-fr/ The full scoreboard can be viewed at www.curling.ca/scoreboard The leaderboard can be viewed at www.curling.ca/2014juniors-en/standings