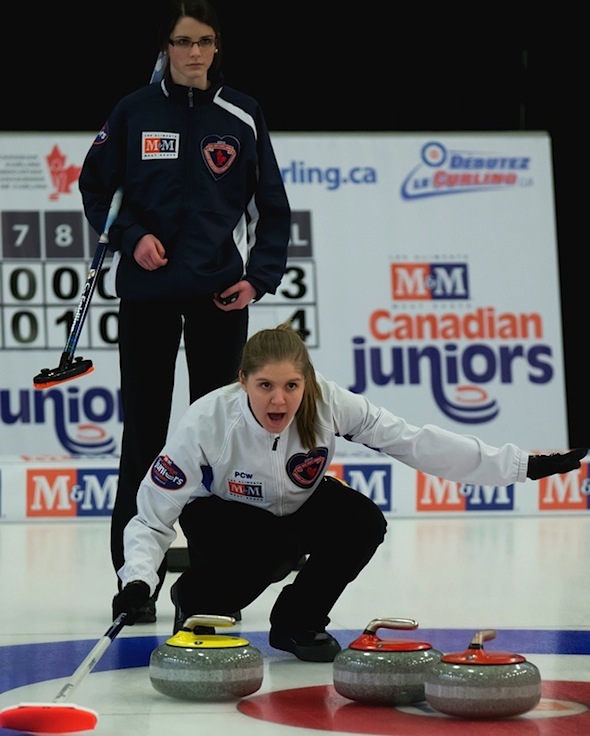 The Nanaimo/Delta-based team featuring Van Osch, her younger sister Marika at third, second Sarah Daniels, lead Ashley Sanderson and coach Jim Newlands, posted a dramatic 8-4 extra-end win over home-province favourite Mary Fay and her Nova Scotia team from Chester on Saturday morning at Queens Place Emera in the women’s semifinal. The win lands the B.C. team in the gold-medal game at 4 p.m. (all times Atlantic, TSN/RDS2) against Alberta’s Kelsey Rocque (Edmonton). Two years ago in Napanee, Ont., the Van Osch sisters, along with older sister Kesa, lost the semifinal at the M&M Meat Shops Canadian Juniors to eventual champion Jocelyn Peterman of Alberta. “Well, it’s an amazing feeling,” said Kalia Van Osch. “I’ve played in a semi and lost, and now to win a semi and to able to play on TSN, and to have this opportunity to represent you country, it’s an amazing feeling, and we’ll go out there and play our hearts out in the final.” It was a struggle against the young Nova Scotians, who had the crowd on their side. B.C. opened the game with a deuce, but fell victim to a stunning shot from Fay in the third end, an angle-raise double takeout to score a game-tying deuce and bring the near-capacity crowd to its feet. “That was an amazing shot she made, that was a game-changing shot, for sure,” praised Van Osch. Fay was one down with hammer coming home but could only manage a single. In the 11th, she had a rock buried at the back four, but Van Osch was able to make a raise-takeout to score four for the win. “You know what? Surprisingly, I was calm,” said Van Osch of her last shot. “I had a few misses earlier in the week when I didn’t make the last shot, but in a playoff game, I’m not going to miss. I’m going to throw the best that I can, and I threw that as well as I could and it happened.” The 15-year-old Fay, backed up by third Jenn Smith (15), second Karlee Burgess (15), lead Janique LeBlanc (16) and coach Andrew Atherton, takes home a bronze medal from her first trip to the M&M Meat Shops Canadian Juniors. “The girls played great; we were just happy that we got to play in the semifinal,” she said. “It was an awesome experience. We had so much fun and we learned a whole lot. We just hope to be back and take advantage of the experience.” The men’s playoffs are set for Sunday at Queens Place Emera Centre. The semifinal at 9:30 a.m. features Alberta’s Carter Lautner (Calgary) against New Brunswick’s Rene Comeau, with the winner playing Manitoba’s Braden Calvert at 4 p.m. (TSN/RDS2). For the second consecutive year, the competition format involves all 14 Member Associations of the Canadian Curling Association (10 provinces, plus Northern Ontario, Northwest Territories, Nunavut and Yukon). This story will be posted in French as soon as possible at www.curling.ca/2014juniors-fr/ The full scoreboard can be viewed at www.curling.ca/scoreboard The leaderboard can be viewed at www.curling.ca/2014juniors-en/standings