By E.J. Harnden (Team Canada second) — Well, we knew coming in that every game was going to be tough so we can’t get too down in the dumps about losing tonight. 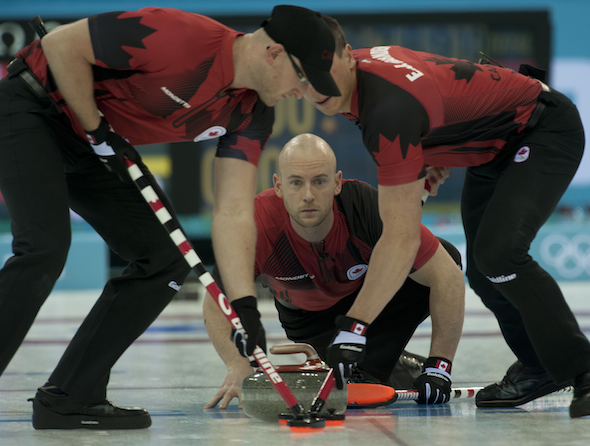 Ideally you want to win every game, but we know that losses are going to be a part of this and unfortunately tonight was our first. But we do think we played better tonight than we did this morning. We’re getting more comfortable with the rocks and the ice, and I know we’re headed in the right direction. It’s a long round robin and we’ll continue to improve. 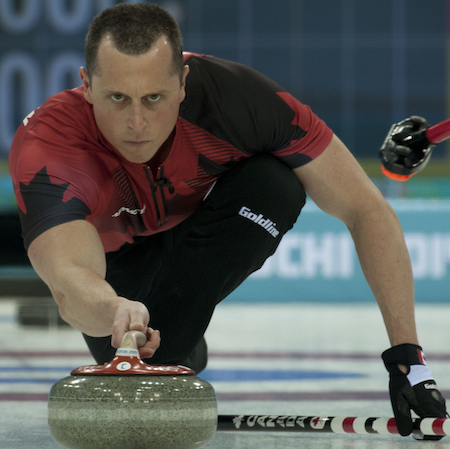 Give credit to Sven and his team from Switzerland. They are very good and we knew it would be tough to beat them. They played extremely well. We just have to forget about it and remember that it’s only one game and it’s a long week. The main goal is to get into the playoffs, however we do that. That’s what we need to focus on now, and just forget this loss. Just get stronger and move forward. We had a lot of things on the go over the last few days after we arrived in Sochi, but I don’t think that was any excuse for us. I don’t think it was tough to get focused for today. I just think that maybe it was the fact that we haven’t played any really competitive games in a couple months now. We had the Skins game and the World Financial Group Continental Cup and a lot of practices but it really isn’t the same as being here with so much at stake. There’s no way you can simulate this environment, no matter how hard you try. We’re just not bringing the same game that we did at the Trials and even at the Continental Cup. We just need to regroup, focus and get back into what makes us a winning team. The good thing is that we know we’ve put in the hard work, both on and off the ice, that we have faith in ourselves and what we can do on the ice. One loss won’t change that for us. 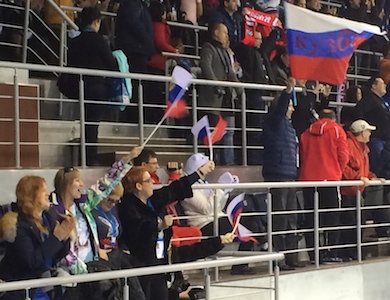 The Russian fans were lively on the first day of the Olympic curling competition.

There definitely is a lot thrown at you here as an athlete. But that’s the great thing about being at the Olympics, too — you want to enjoy the experience as much as possible and take things in. But I think we just need to focus on the curling side of things now — get back to that, and enjoy the other things as they come. But it’s absolutely amazing in Sochi. So far it’s been phenomenal. Even though we had a loss tonight, it’s still a fun atmosphere and we just need to get back to our winning ways. And we know we can do it, beginning tomorrow against Niklas Edin and those Swedes. Be sure to watch us on CBC at 5 a.m. ET. Hoping they open the doors early at the Soo Curlers Association! And don’t forget to watch Jennifer’s team play against Sweden at midnight Eastern time. Go get ’em, ladies! (This is part of our series of athlete blogs from the Winter Olympics in Sochi; this story will be posted in French at www.curling.ca/fr/ as soon as possible)