By Brad Jacobs (Team Canada skip) — A lot of people look at what we did when we went unbeaten at the Tim Hortons Roar of the Rings and think that we should be doing the same thing here in Russia. 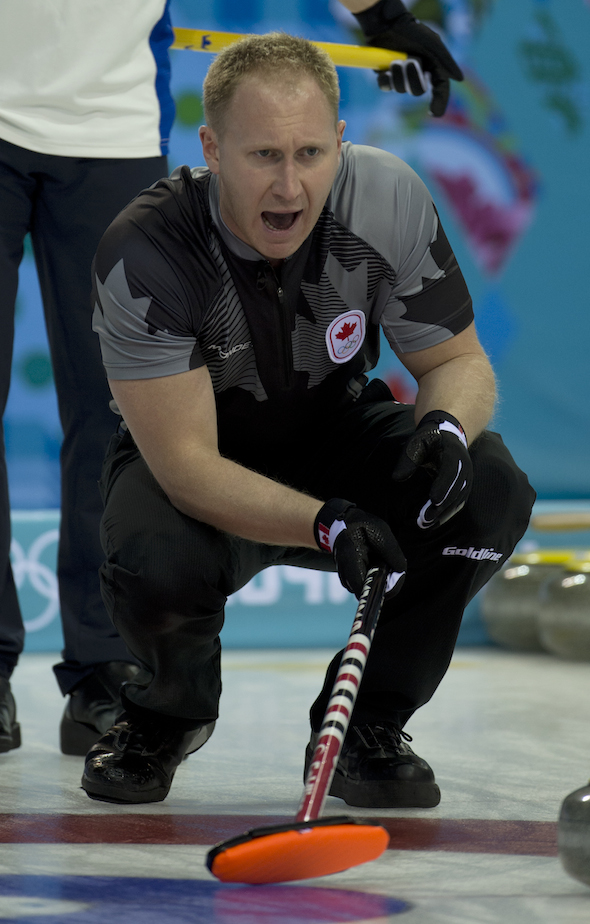 Actually, what happened in Winnipeg wasn’t typical of our team. It was actually very untypical of our team. We are known for doing the things the hard way, grinding out wins and grinding out long weeks. We’re into one right now. Maybe it’s not the most comfortable place to be in, but at the same time, when our backs are against the wall, we usually come out playing. And you know what? We came out playing great against Sweden and if we can put some more performances like that together, maybe just a little bit better, I really like our chance of winning some more games here. 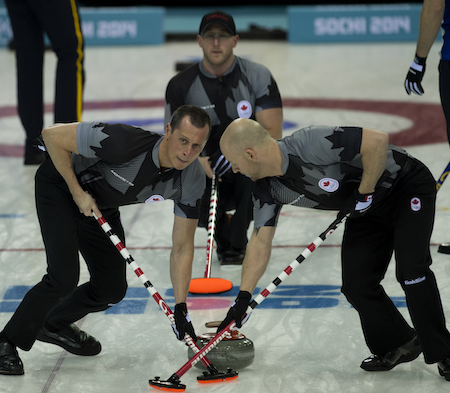 You know what? We were taught at an early age to never give up. When the going gets tough, the tough get going. Our team is a good example of that. We’re going to play everyone hard and play every game like it’s our last one, and I think we did there against Sweden. It was just hard to get momentum against Niklas; we kept giving up deuces when we’d get one of our own. But it was a good game for us, and we’re excited to get back on the ice on Wednesday against those Russians. We know it’s going to be loud in there, but it’s going to be a cool atmosphere Everybody I’ve talked to since we got here says they have a “Welcome to the Olympics moment.” Opening ceremonies was it for me, I think. When we walked out into the stadium, it was unbelievable, it was a spectacle. That was the moment — an awe-filled moment for me and probably for any other athlete who’s in his first Olympics. But after that, it was on the ice and practising and now we’re into the competition, and it feels like any other event. Except louder. 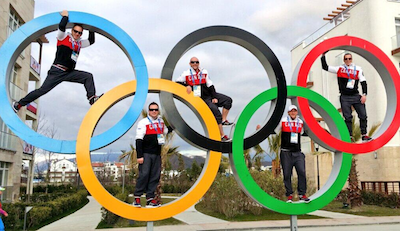 Every athlete wants a picture with the Olympic rings!

I know one of the things I thought about before we got here — and I know the two Ryans, E.J. and Caleb were thinking about the same thing — was the food. But it has been awesome in the athletes dining hall! It’s a 15-minute walk from where we’re staying, but the Canadian Olympic Association brought over a lot of bicycles for the athletes, and we’ve been doing some riding to the dining hall. There’s a lot of hot, great food over there. You have your choice of pasta, rice, meats, vegetables, pizza, McDonald’s — it’s nice to walk in there, and whatever mood you’re in, you just go to that area and pick out your food. I’ve been sticking to the rice, chicken and vegetables a lot. I love eating that stuff and I know it’s relatively healthy for you. We’re going to be spending time with our families and friends today, and we don’t play again until Wednesday night against the Russians. You can watch us play at 10 a.m. Eastern on TSN2. Enjoy the game, everybody! (This is part of our series of athlete blogs from the Winter Olympics in Sochi; this story will be posted in French at www.curling.ca/fr/ as soon as possible)