By Kirsten Wall (Team Canada alternate) — The one thing about being an alternate instead of being one of the four players on the ice is that it is DEFINITELY more nerve-racking!

We had control of the first two games we played here in Sochi, but this game against Great Britain was the hardest one to watch, for sure. There were a lot of misses on both sides and a lot of great shots on both sides. But I don’t think it was the game that either team was expecting to see. There were more misses than both teams would want. But in the end, we got the win, so we’re happy about that. It’s definitely harder to watch than to play. You’re feeling everything from watching both the opposition and your own team perform on the ice. It’s a roller-coaster, but it’s also fun in that you get to chat with the coaches, Elaine and Janet, and talk through it with someone else. You’re not hanging by yourself. It’s totally out of your hands when you’re an alternate during a game. There’s nothing you can do; you’re just a little bit closer than a spectator. You may have some input before the game and during the fifth-end break, but in the end, it’s the players on the ice who make or break the shots. I started playing with Kaitlyn, Jill and Dawn two years ago when Jennifer was pregnant with Isabella. I am so impressed by their dedication to the sport. They are ATHLETES, even if they have jobs or they’re mothers. Their devotion to the sport is second to none, and so is their devotion to each other. Their team dynamics are incredible. They’re so nice, and it’s easy to just go with the flow with them. They made it very easy for me to play with them that half-season before Isabella was born, and I’m very honoured that they gave me the call for the run to the Olympics. 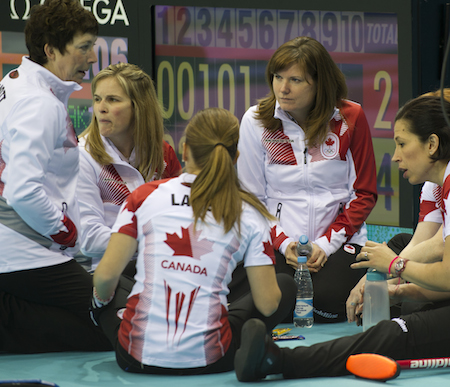 Team Canada alternate Kirsten Wall, second from right, has an important role to play with the team. (Photo, CCA/Michael Burns)

I think my main job here in Sochi is just trying to keep them in their happy place — making sure they’re happy and injury-free. Whatever makes things easy for them, like grabbing something that they need to make their lives easier. And in terms of the curling, it’s about matching rocks after the late draw, to confirm what they found in practice or to clarify anything that needs to be clarified. But they’re so well-planned. They kind of dot the i’s and cross the t’s before we even get here. There are backup plans for every plan, so I haven’t had to do any running around. But if the time ever happens? I’m ready! We’re looking forward to a night off to relax. We’re back on the ice tomorrow morning against Denmark. Actually, late tonight in Canada — the game starts at midnight Eastern time, and you can watch on CBC. And thanks to all of the fans back home for their great support! (This is part of our series of athlete blogs from the Winter Olympics in Sochi; this story will be posted in French at www.curling.ca/fr/ as soon as possible)