By Kaitlyn Lawes (Team Canada third) — We kept our winning streak alive tonight against a really good Switzerland team, and we’re very happy with the way we’ve been curling. We won twice today, and that’s a nice way to go to bed, especially with a day off tomorrow!!! 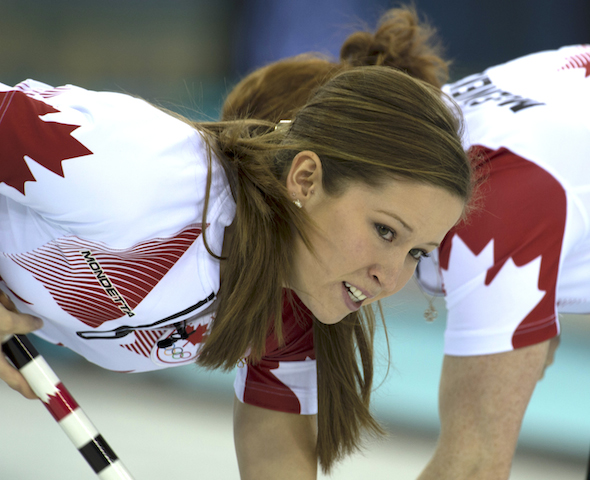 I don’t think you can ever expect something to go like this coming into such a strong field. We hoped to get off to at least a 2-1 start and kind of keep it going, but we’re happy with how things are going and hopefully we can get a few more W’s. I’ve never played in an international championship at the women’s level, but it’s still different, to be honest. It’s the Olympics. It’s different from every other curling competition, just because there are other sports going on, more excitement, and you feel like you’re part of a bigger team. I feel like we’re pretty happy with the way things are going, and I haven’t really thought about not being in an international event because the other girls kind of take me under their wing. They’ve always been great at preparing me for every situation. Before I got here, I decided that I just wanted to try to take everything in and enjoy the experience. Obviously, I wanted to make sure I was focused on the curling, but at the same time, I didn’t want to miss out on experiencing what the Olympics mean to me. So it’s been great getting to meet the other athletes, and just saying hi to people wearing the Canada jacket. It’s pretty cool. 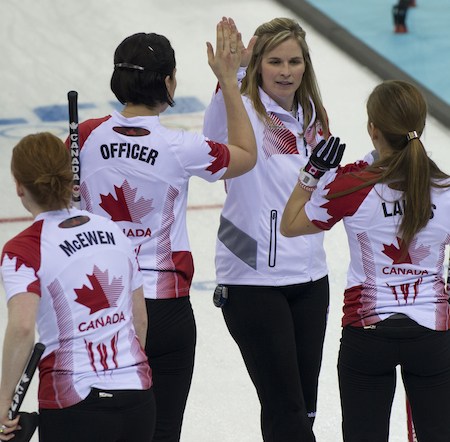 To be honest, I just find being around other athletes very inspiring. Seeing Alex Bilodeau and watching him win his gold medal again in the moguls was incredible. We got to meet the Dufour-Lapointe sisters. Every athlete I’ve met has been inspiring. Even being in the dining hall and seeing a couple of hockey players — you watch them on TV all the time, and now they’re my teammates. Well, I’m not quite one of them — they make a bit more money than I do! But at the same time, we’re teammates, and they want to be part of the bigger team, too. So that’s pretty cool. Honestly, every single day I take several moments and think, ‘We’re at the Olympics!’ I’m having the time of my life, honestly. The first couple days, we got to do the touristy things and see the village, walk around and take all our fun pictures and experience what you think the Olympics is all about. Now, we’ve taken it to the curling side. But every single day has exceeded my expectations. I’ve been having way too much fun; I can’t wipe the smile off my face! We’ll enjoy spending time with our families and relaxing tomorrow, and then get ready for our last four round-robin games. Our next game is Sunday morning in Sochi against Japan. Or Saturday night in Winnipeg! It starts at 11 p.m. Saturday Central, and you can watch it on CBC. Thanks to everybody back at home for the support! (This is part of our series of athlete blogs from the Winter Olympics in Sochi; this story will be posted in French at www.curling.ca/fr/ as soon as possible)