By Ryan Fry (Team Canada third) — We had a great practice today to get ready for the semifinal on Wednesday against China. 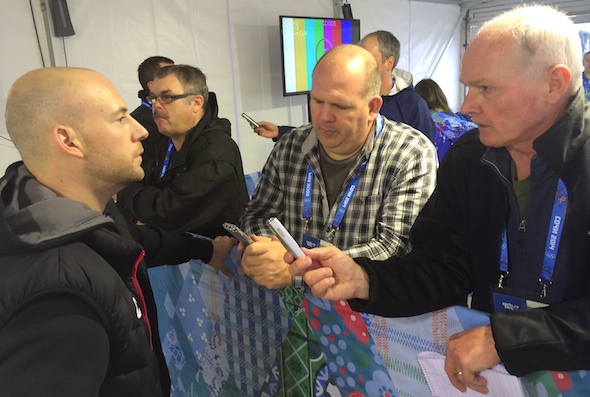 We’re pretty loose right now. I’ve been trying to shut down and be quiet, and relax. We know that come 2 p.m. or so tomorrow, the intensity’s going to start  kicking up real high. Right now, it’s just about being as relaxed as possible. Probably there will be a little ping pong and a little NHL14. And we’re going to see our girlfriends right now to do a little relaxing, and that’ll be it for today. We’ve done a lot of playoff curling over the last year, and I think this is just the same as other playoff situations. This is a major, major event, but so are those, like the Brier and the Trials. When we’re able to compete at those playoffs, we’ve been able to bring a solid game to them. It’s just going to be another opportunity to prove ourselves, and I just pray to God that we’re able to bring that same type of game that we’ve brought to other playoff games, and if we do, then we have a pretty good shot at beating China and making it to that gold-medal game. 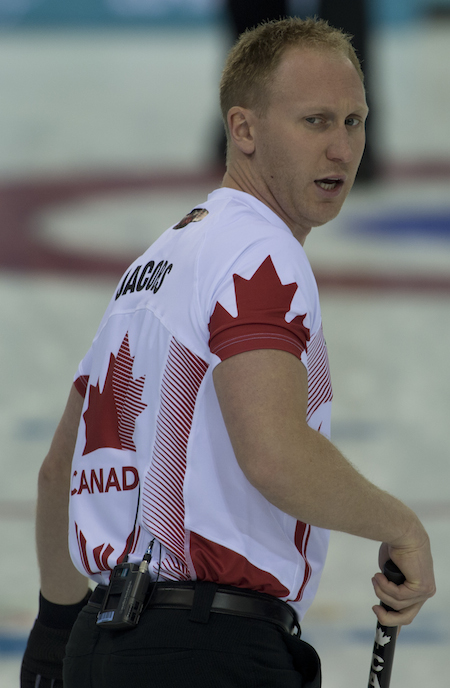 Brad was able to draw the pin to beat China the other night, and that was great for us; we have all the confidence in the world for Brad to be able to make those last shots, and he’s got all the confidence in himself. The more opportunities you have to throw those and make them, I think it just seasons you as a skip over the years. We know the type of player he is, and there’s no one else that the three of us would want throwing those shots for us. My dad Barry was a great curler; he won the Brier in 1979, but he never got a chance to curl at the Olympics, so I know how much this means to him. I think we would share a medal not just with my dad, but with everyone who’s supported our team, and ourselves individually, through our whole careers. So I’d be sharing it with my dad, sharing it with my mom, Judy, my grandparents, who lived and died with the sport and ultimately ended up passing away a few years ago — all those people who supported and watched me growing up. If we’re lucky enough to step up on that podium and receive a medal, then it’s going to be shared with everyone. And if we don’t? We’ll still share this experience with everyone because I’m very proud of the team we’ve been able to become and the way we conduct ourselves. It’s a pretty phenomenal accomplishment to be an Olympian, and I couldn’t be happier about it. My dad lays pretty low when it comes to my curling. We’ve had tons of conversations over the years, and when we get together, it’s the main focus of our conversations But we haven’t spent a whole lot of time talking about it here because he doesn’t like to get too involved in that side of it. But it’s definitely nice having both of my parents here because it’s a calming influence, and I don’t think this would mean as much if I didn’t have them here to share it with. We can’t thank the fans back in Canada enough for their support, it’s been amazing! I know we’ll be cheering on Jen and the girls when they play Great Britain at 5 a.m. Eastern on CBC, and then be sure to watch us in the semifinal against China on Wednesday at 10 a.m. Eastern on Sportsnet. (This is part of our series of athlete blogs from the Winter Olympics in Sochi; this story will be posted in French at www.curling.ca/fr/ as soon as possible)