Business of Curling: Attracting new members through Learn to Curl

A few years ago, when Kathy Arnold looked into starting a Learn to Curl program at the McArthur Island Curling Club in Kamloops, B.C., she had no idea the results would be so spectacular – and so long term. Arnold is a veteran on the curling scene in B.C., both on and off the ice. Aside from involvement in her own club (12 years on the Board of Directors and 10 years as President), she has also volunteered at Season of Champions events and the 2010 Vancouver Olympics. 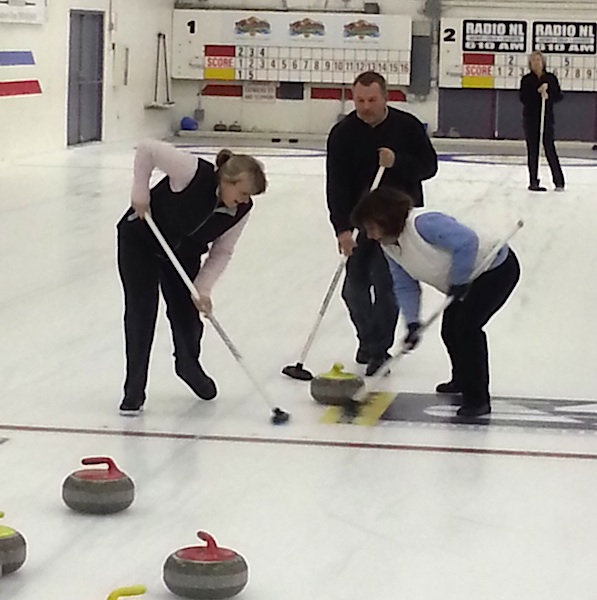 Leandra Hamer-Jackson: “We go out with the attitude that win or lose, we are having fun, doing something together and getting some much-needed exercise at the same time.” (Photo K. Arnold)

Keen to see the sport grow, Arnold became a Learn to Curl instructor in 2011, and serves as Curl BC’s Region 7 coordinator for the Capital One Rocks & Rings program. In other words, Arnold not only knows curling, she’s eager to spread the word. And that’s exactly what she did a few seasons ago, when McArthur Island CC ice technician Andrew Barnes suggested she start a program to attract beginners and increase the club’s membership. After registering the session with the City of Kamloops recreation department’s Activity Book, Arnold enlisted the aid of club member Ray Olsen to be head instructor. Olsen lined up club members to help out – that included making sure each instructor completed a four-night coaching course from Curl BC – and the first program got started with over 32 participants on the ice. “I approached the Board to purchase equipment – shoes, slides, grippers, brooms, and throwing devices,” she says. “Ray and I both agree that this was what has made a huge impact on our teaching.” “Ray’s game plan was loosely based on a program we got from Ottawa,” says Arnold, referring to the Getting Started in Curling for Adults program designed by Ottawa Curling Club Professional Earle Morris. “He modified it and we find that it now works for us.” For eight weeks, Olsen led the participants through the carefully planned course and got them hooked. And then the real challenge arose: what to do with all these new curlers once the program was done. The answer was to create a brand new Open Fun League on Monday and Friday evenings, geared to beginners only, and with instructors on hand for support. “All it takes is one visit to either the Monday night or Friday night session to understand why it is successful,” says Arnold. “The atmosphere is one of relaxed enjoyment. The focus of every team is to have fun, really try to win, but enjoy it no matter what the outcome.” The enthusiastic response resulted in lots of interested teams and a few scheduling headaches, especially over the perennial challenges of early or late draws, but Arnold remains philosophical. “I was second-guessing myself about doing too much to accommodate,” she says, “but I felt we could not afford to lose any teams, so let’s just try to make it work. My idea was to let the curling bug bite them and once they were hooked, we could show them the benefit of early/late draws.” 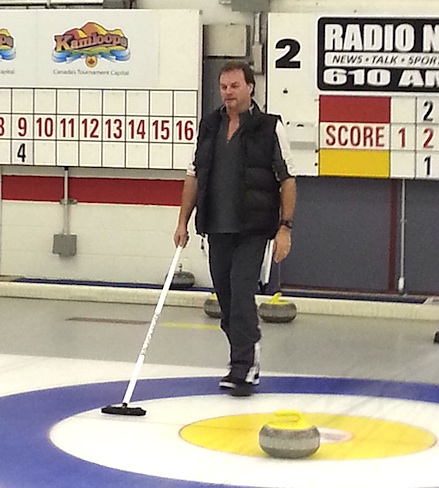 Ian Brown: “We are all around the same skill level and the games are somewhat competitive and a lot of fun.” (Photo K. Arnold)

That approach appears to have worked. Leandra and Randy Hamer-Jackson are in their second season in the Monday night Fun League, and already Randy is trying his hand at skipping. “We go out with the attitude that win or lose, we are having fun, doing something together and getting some much-needed exercise at the same time,” says Leandra. Ian Brown joined the club with his wife when the couple moved from Squamish, B.C., looking for a good way to meet people in the community and socialize. “We are all around the same skill level and the games are somewhat competitive and a lot of fun,” he says. “I am now skipping a team and learning the finer points of curling without getting killed every night be a team that has years of experience.” “I enjoy the people and the wonderful atmosphere,” says Suzanne Marsel, who is in her second year at the club and says she was nervous at first about playing in the Monday/Friday league. “I’m always learning. Curling is the highlight of my week!” “I wish more people could come out and curl,” she says. “They don’t know what they’re missing.” Arnold credits local sponsor Rob Zimmer (Zimmer Wheaton GM) and grants from the provincial government and the City of Kamloops for providing support for equipment, instructor honoraria, and advertising. And the cooperation of the club’s Board of Directors as well as the dedication of Olsen and his instructors ensured the success of the program. “Just two full seasons ago, we had no Monday curling, no Wednesday evening curling and no Friday evening curling,” says Arnold. “Now, in our 2013-14 season, we have 24 teams in our Monday/Friday Open Fun League, and 25-30 new curlers taking our Learn to Curl every Wednesday evening.” The Fall session at McArthur Island CC attracted 20 new participants, which means Arnold had to find space for another four to six teams in January. “What a predicament!” she says. “Almost too many curlers!” 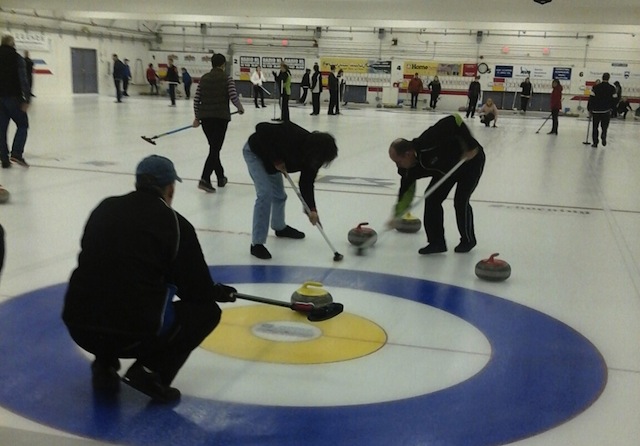 Action on the ice at the McArthur Island Curling Club in Kamloops (Photo K. Arnold)