A blend of Olympic gold-medallists, former world champions and fresh new faces will take to the ice on Saturday at the Interior Savings Centre when the 2014 Tim Hortons Brier, presented by SecurTek, begins play. 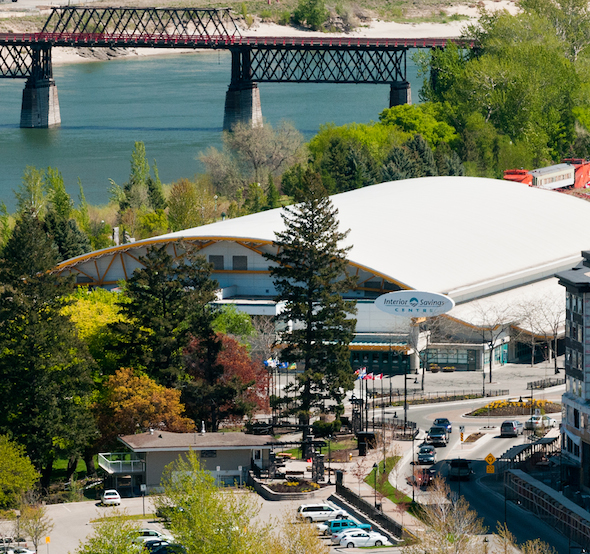 Play in the 2014 Tim Hortons Brier, presented by SecurTek, gets underway Saturday at the Interior Savings Centre in Kamloops, B.C. (Photo, courtesy www.olsenphotography.ca)

The 12-team field, which includes 2006 Olympic gold-medallist Brad Gushue of Newfoundland/Labrador, 2010 gold-medallist John Morris of British Columbia, two-time world champion Jeff Stoughton of Manitoba and 2010 world champ Kevin Koe of Alberta, will open play on Saturday at 1:30 p.m. (all times Pacific), all with hopes of earning the right to represent Canada at the 2014 World Men’s Championship, presented by Ford of Canada, March 29 to April 6 in Beijing, in addition to becoming the first Team Canada in Brier history at the 2015 Tim Hortons Brier next year in Calgary. Morris is making history as just the third player to earn the right to represent three different provinces at the Tim Hortons Brier, having played for Ontario in 2002 and Alberta in 2007, 2008, 2009, 2011 and 2013, and then B.C. this year. His father Earle and Ryan Fry also represented three provinces. Morris’s team from the Vernon and Kelowna Curling Clubs features Jim Cotter, who grew up in Kamloops, throwing last rocks. The B.C. team gets a test right out of the gates on Saturday at 1:30 p.m. against Koe’s team from Calgary. Stoughton, meanwhile, will be playing in his 11th Tim Hortons Brier and chasing his fourth title; his first came in 1996 in the same building in which he’ll be competing for the next week and a half; he beat Alberta’s Kevin Martin in the 1996 Brier final in Kamloops. Stoughton will be looking to join Ernie Richardson, Kevin Martin and Randy Ferbey as the only four-time Brier champion skips. His team features Mark Nichols, who played on Gushue’s 2006 Olympic team, throwing second rocks. Gushue’s young team from St. John’s, meanwhile, will be looking to continue its steady growth with an eye on building for future Olympic runs. Like Stoughton, Gushue will be making his 11th Brier appearance. Also in the field is 2006 Brier champion Jean-Michel Ménard of Quebec, is another experienced skip who’ll contend for a spot in the four-team playoff round with his Saint-Romuald quartet. At the other end of the experience spectrum will be Ontario’s Greg Balsdon, who put an end to Glenn Howard’s run of eight consecutive Ontario championships with a 10th-end steal in the provincial final on Feb. 2. The field is rounded out by Saskatchewan’s Steve Laycock (Saskatoon), Northern Ontario’s Jeff Currie (Thunder Bay), Nova Scotia’s Jamie Murphy (Lower Sackville), New Brunswick’s James Grattan (Oromocto; also playing in his 11th Brier), Prince Edward Island’s Eddie MacKenzie (Charlottetown) and the Northwest Territories/Yukon’s Jamie Koe (Yellowknife). It will be the 85th renewal of the Canadian Men’s Curling Championship, and the second time Kamloops has hosted. B.C. has played host to the Brier on six previous occasions since the event’s inception in 1927. The Brier has been played in 31 cities across Canada, from Victoria to St. John’s. Manitoba has won a leading 27 Briers, while Alberta is next with 25. Teams will play a 12-team round-robin draw leading to the Page playoff round, which sees the top two teams meeting in the Page 1-2 game, with the winner advancing to the final while the loser goes to the semifinal. The third- and fourth-place teams meet in the Page 3-4 game, with the winner advancing to the semifinal on Saturday night. The loser plays in the bronze-medal game Sunday morning against the semifinal loser. In addition to the playoff race during the round-robin schedule, there will also be a battle at the other end of the standings. For the first time in Brier history, the winner of the 2014 Tim Hortons Brier will become Team Canada and will return in 2015 at the Scotiabank Saddledome in Calgary to defend its title. The champs will be joined in the 12-team main round robin in 2015 by the top 10 provinces and territories based on total number of Brier round-robin wins in 2012, 2013 and 2014. Meanwhile, the three teams with the fewest combined wins in those Briers will be assigned to the pre-event qualifying tournament just prior to the 2015 Tim Hortons Brier. At that time, those three teams will play off with Nunavut (who will be eligible to compete in the Brier for the first time in 2015) for the 12th and final berth in the 2015 field. Team Canada, as defending champion, and Alberta, as the host province in 2015, are exempt from the play-in tournament. The two-year win totals coming into the 2014 Tim Hortons Brier are as follows: Ontario (20), Manitoba (16), Alberta (15, exempt), Newfoundland/Labrador (13), Northern Ontario (13), Northwest Territories (12) Quebec (10), New Brunswick (10), Saskatchewan (8), Nova Scotia (5), P.E.I. (5) British Columbia (5), and the Yukon (0). TSN (RDS in French), the official broadcast partner of the Season of Champions, will provide exclusive and comprehensive coverage of the Tim Hortons Brier, televising all morning, afternoon and evening round-robin draws, plus the playoffs. The gold-medal final is Sunday, March 9, at 4:30 p.m. local/7:30 pm ET. It’s the 12th consecutive year that the Brier final has been contested in Eastern prime time, starting in 2003 in Halifax. In addition to wearing the Maple Leaf in Beijing, the winning team will qualify for the 2014 Canada Cup of Curling, Dec. 3-7 in Camrose, Alta., as well as earning the right to play for Team Canada at the 2015 World Financial Group Continental Cup in Calgary. Teams that make the playoffs will earn a share of $130,000 in cresting television exposure value: $40,000 each to the winner and runner-up, $30,000 to the bronze-medal team and $20,000 to fourth. The Ford Hot Shots skills competition will begin on Friday, with the preliminary round set for 1 p.m.; the top eight qualifiers will advance to Saturday’s playoff round, which begins at 11 a.m. following the Opening Ceremonies at 10 a.m. The Hot Shots champion will win a two-year-lease on a 2014 Ford Fusion 2.0L, AWD with EcoBoost, an approximate retail value of $15,300. The second-place finisher will be presented with a cheque for $2,000, while the third-place finisher receives $1,000. For draw information and live scoring, go to www.curling.ca.