Calvert and crew get on a roll at World Juniors

Braden Calvert and his Winnipeg team notched two more wins on Saturday, including a 6-5 victory over first-place Norway at the World Junior Curling Championships in Flims, Switzerland. “I guess we’ll take the win after a game like that,” said Calvert, who handed Norwegian skip Eirik Mjoeen his first loss of the round robin. “We got off to a bad start. I threw a really bad rock in five and we had to come back from that. Luckily, we did and we pulled through.” After giving up consecutive steals and trailing 3-0 at the break, Calvert and his team of Kyle Kurz, Lucas Van Den Bosch, Brendan Wilson, alternate Matt Dunstone and coach Tom Clasper fought back in the sixth. Calvert made a tricky angle raise double to score two and followed that up with a steal of two in the seventh to go ahead. “That was huge in terms of the momentum we got from that shot,” Calvert said about the double in the sixth end. “We gained a lot of confidence and basically got back at them.” 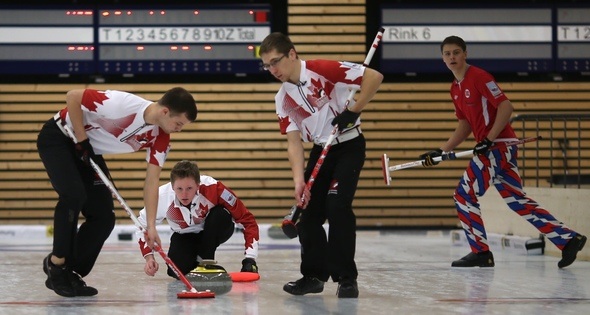 Against Switzerland, the Canadians “came prepared to play,” according to Canadian Team Leader Andrea Ronnebeck. “The Swiss fans, as always, were enthusiastic but so were the Canadian fans,” said Ronnebeck. “The arena was rocking (pun intended) with a full house of Norwegians, Swiss, Scots, Italians, Americans and Canadians. It was awesome. Cow bells and all!” And the Canadian supporters had a lot to cheer for as Calvert led the team to a 7-2 win over Switzerland’s Yannick Schwaller, improving Canada’s record to 4-3 and moving them into a three-way tie for third place (with Scotland’s Kyle Smith and Schwaller). “We’re starting to get on a bit of a roll,” said Calvert after the game. “We’re starting to gain some momentum and confidence. We were really sharp out of the gate tonight and grabbed an early deuce. That was definitely the turning point in the game and we kept fighting and were able to pull it off. All the teams here are tough and each game is going to be a battle.” On Sunday, the Canadian men will take on USA’s Jake Vukich (2-5) and Austria’s Sebastian Wunderer (3-4) to finish up the round robin. On the women’s side, Kelsey Rocque defeated USA’s Cory Christensen 8-4 to move into first place in the standings, tied with Korea, Switzerland and Russia, all with 5-2 records. Rocque and her Edmonton team of Keely Brown, Taylor McDonald, Claire Tully, alternate Alison Kotylak and coach Amanda-Dawn Coderre led the USA 6-4 after eight ends and scored a deuce in the ninth to put the game away. “We’re getting more comfortable as the week goes on, trusting the ice more and throwing a little better,” said Rocque. “That was one of our best performances. We’ve been really consistent with our performances and we’re happy with it.  We’ve got momentum and confidence. It’s been really good.” The Canadian women have now won three in a row and will try to keep the momentum going in their final games of the round robin on Sunday against Scotland’s Gina Aitken (2-5) and Denmark’s Christine Svensen (0-7). The live coverage schedule is available along with news, live scores and galleries on the event website: https://wjcc2014.curlingevents.com Facebook: https://www.facebook.com/WorldJuniorCurlingChampionships Twitter: @worldcurling and @WCFmedia Twitter Hashtags: #WJCC2014 #curling The World Curling Federation (WCF) is the international sport federation governing the Olympic winter sport of curling and the Paralympic winter sport of wheelchair curling. The WCF is one of seven International Sports Federations currently part of the Winter Olympic programme. It represents 53 Member Associations and is generally acknowledged to direct one of the fastest-growing international winter sports. www.worldcurling.org