Kirk Muyres has been watching the Ford Hot Shots competition since he was “knee-high to a duck” and Saturday, in his first foray into the event, he outdueled Darren Roach to win the skills contest. 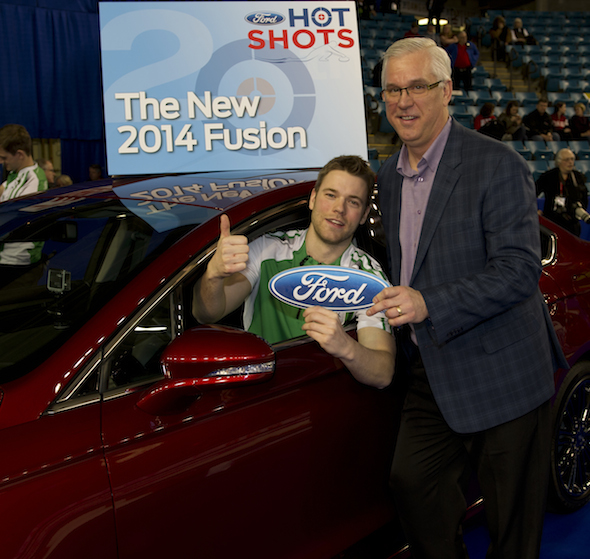 The Saskatchewan third scored 28 of a possible 30 points in the six-shot final to beat Roach, second for New Brunswick, 28-18. For his victory Muyres received a two-year lease of a 2014 Ford Fusion, 2.0l AWD with EcoBoost, an approximate retail value of $15,300. Roach received $2,000 and the third-place finisher Mark Bice of Ontario earned $1,000. “I remember watching it when I was five, six years old, when it started,” Muyres said of the Ford Hot Shots that is in its 20th year. “One day I said I would like to be there. And now, at 23, to get a chance it’s pretty cool.” Roach led by a single point halfway through the final. On the fourth shot, the raise, Muyres scored a perfect five while Roach came up short and earned only two points. On the next shot, the hit and roll, Muyres again earned the maximum five while Roach missed and got only a single point, giving Muyres an insurmountable 24-18 lead. “If I stick to my process, I usually have a good chance of making every shot and that’s what I did.” Muyres said of his pinpoint accuracy throughout the four rounds of competition. “I can’t say you expect to win this, but to get a chance I don’t think it was out of my comfort zone.” A member of the 2011 Saskatchewan rink that won the Canadian junior title, Muyres said he will sharing the new car with his brother Dallas who was also in Saturday’s final eight playoff. “We decided whatever we win we split it halfway. We’ll figure out how to split a car, but we live in the same city so we’ll figure something out.” Muyres was tops in the semifinals with 21 points. Roach and Bice tied with 19 points and Roach advanced with the closest-to-the-button measurement. Lead Jamie Childs of Northern Ontario was eliminated with 18 points. Roach topped all throwers in the quarter-finals with 26 points followed by Childs and Muyres with 24 and Bice with 23. Eliminated in the quarter-finals were leads Dallas Muyres (18), Robert Borden of Northwest Territories/Yukon (19) and Geoff Walker of Newfoundland-Labrador (19) and second Colin Koivula of Northern Ontario (18). The annual competition sees curlers attempting six different shots: hit and stay, draw the button, draw the port, raise, hit and roll, and double takeout. Points for each shot are awarded on a scale of zero to five depending on the end result. The competition has been held annually since 1995 and past winners at the Brier are  Greg McAulay and Pat Ryan of British Columbia, Alberta’s Don Bartlett, Randy Ferbey and John Morris, Saskatchewan’s Steve Laycock, Manitoba’s Steve Gould (twice), Northern Ontario’s Mike Coulter, Ontario’s Ed Werenich, Craig Savill and Richard Hart, New Brunswick’s Rick Perron, Jeff Lacey and Marc LeCocq, Newfoundland and Labrador’s Mark Nichols, Ontario’s Glenn Howard and Wayne Middaugh, and last year’s winner, Marc Kennedy of Alberta. All draws for the Tim Hortons Brier that begins Saturday at 4:30 p.m. ET will be televised live on TSN/RDS 2, the official broadcasting partner of the Season of Champions. Live scoring will be available at: www.curling.ca/scoreboard/?e=19 To purchase tickets to the Tim Hortons Brier, presented by SecurTek, go to: www.curling.ca/2014brier-en/tickets/ The French version of this story will be available at www.curling.ca/2014brier-fr/ as soon as possible.